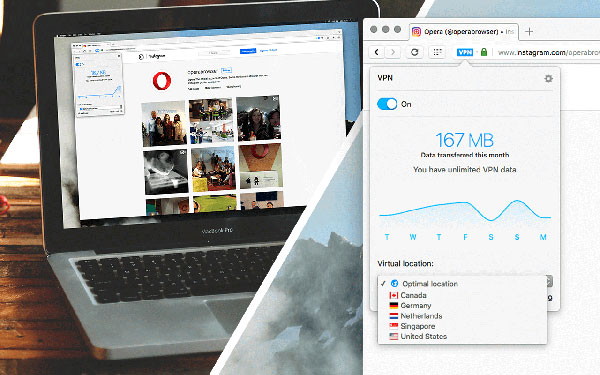 Opera is continuing on its quest to be the browser of choice for power users. The latest version of its browser, Opera 40, now comes with a free VPN with unlimited data, which is good news for those of you who need to circumvent geoblocked websites but don’t want to pay for a third-party VPN service.

The company began testing out a built-in VPN in a developer version of its desktop web browser in April this year. More recently, it rolled out a free VPN to its Android mobile browser, a feature that has already been available on iOS since the earlier part of the year.

Opera 40 now features a checkbox to “Enable VPN” in its Settings menu (under Privacy & Security), and when enabled, a VPN icon will appear in the browser’s address bar to let you monitor your data usage and check which country your traffic is being routed through. The icon also lets you toggle the VPN on and off. Choices are limited to just five countries, including the US, Canada, Germany, the Netherlands, and Singapore.

VPNs help provide an extra layer of privacy and anonymity by routing your traffic through different countries, and Opera’s VPN will come in as a handy, free alternative to the myriad paid services out there. Opera 40 also comes with other features, like a power-saving mode.

That said, if you’re looking to access the U.S. catalog of Netflix, you may have better luck with other VPN solutions, as the video streaming site has reportedly already blocked Opera’s service.

Source: Opera via The Verge