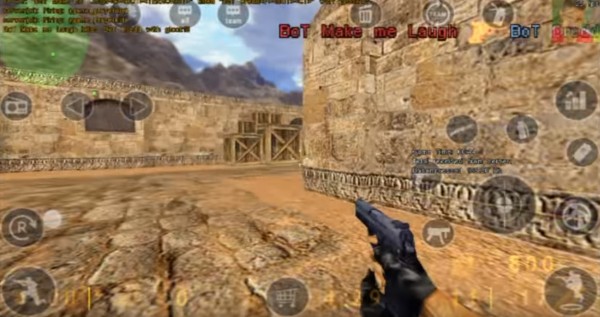 Are you a fan of Counter-Strike? Do you get fidgety if and when you don’t get your fix of the game during certain times of the day? Do you wish there was a better way of playing the game on the move, other than whipping out your laptop?

If you answered yes to the second and third question, you may have an addiction to the game, and you should seek some help.

However, if our friendly advice isn’t going to deter you from getting your daily dose of Counter-Strike, then you’ll be happy to know that someone has ported Counter-Strike 1.6 on to the Android OS.

Allow us to be clear: Valve has not made a mobile-friendly version of the world’s most popular FPS title, but a fan has actually managed to port over the full game on to the Android OS.

Of course, as you would expect, the game still has some kinks to be worked out, such as the random lag and occasional stutters in-game, as evidenced in the video embedded in this article.

Now obviously, the game isn’t officially available on the Google Play store, and you’re going to have to download the game on to your mobile device via the Xash 3D Android app, which you can download from the Github site, where the game can also be downloaded from. Your phone will most likely require a powerful GPU to run the game though, something like the Adreno 530.

Previous Story
Thanks to Intel’s Apollo Lake chips, we could see slimmer and more powerful PCs
Next Story
Using cellphones in the cinema could be commonplace in the future (updated)