Yesterday, ASUS began COMPUTEX with the announcement of several new ZenBooks and VivoBooks for the masses.

Today, the company gave us a sneak peek at several of its new X299 motherboards under it ROG Strix, Prime, and TUF (The Ultimate Force). As you’d expect, these motherboards were built to work in tandem with Intel’s new LGA 2066 Skylake-X and Kaby Lake-X Extreme processor (though, more for the former than the latter). 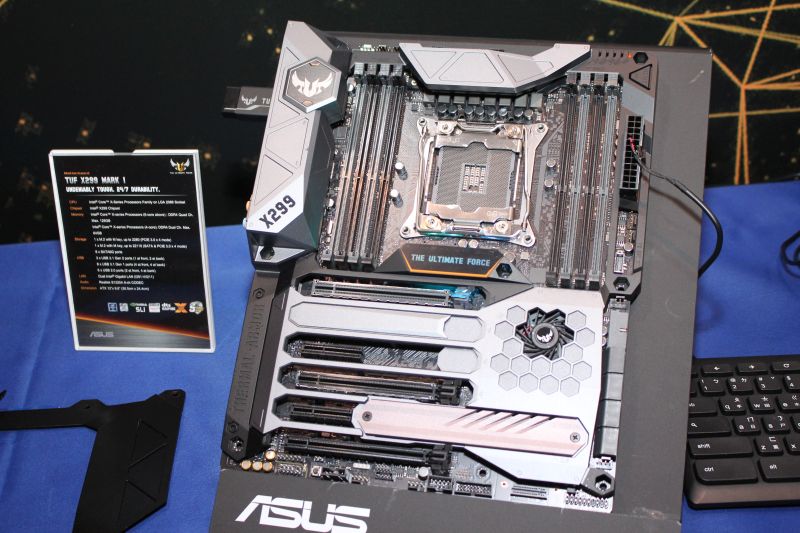 During the workshop, ASUS started us off with the TUF X299 and Prime X299-Deluxe motherboard. As you may have noticed, ASUS has dropped the ‘Sabertooth’ moniker from its TUF lineup, but that being said, the X299 TUF motherboard still retains the armored visage, as well as the military-grade components and durability that made it popular in the first place. Specifications-wise, the motherboard comes with eight DDR4 DIMM slots, three PCIe 3.0 x16 slots, two M.2 slots (rated at 32GB/s), six SATA 6 ports, a 24-pin ATX, and an 8-pin + 4-pin ATX (for more stable overclocking), to name a few. Other features of the TUF motherboard include the Thermal Armor for the M.2 SSD, which allows the built-in fan to redirect its airflow towards the storage component and reducing its temperature by as much as 25 degrees Celsius.

It even comes with a VGA card holder that essentially supports the weight of that graphics card with an abnormally large cooling solution, allowing users bolt the card into place by connecting it directly on to the motherboard and preventing any sagging on the card’s fins and taking pressure off from the PCIe slot. 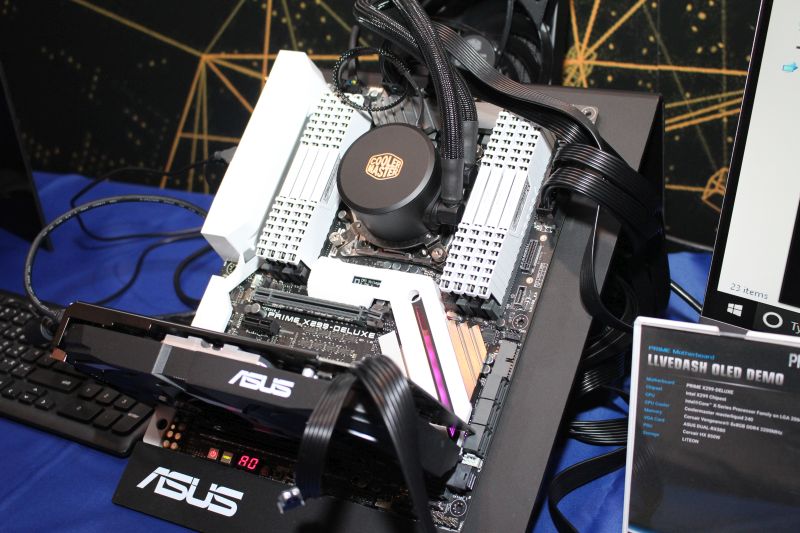 Moving forward, the second motherboard ASUS announced was the Prime X299-Deluxe. As the image above shows, the motherboard carries a similar specifications layout to many of ASUS’ high-end desktop (HEDT) motherboards: it comes with eight DDR4 DIMM slots (capable of supporting frequencies of 4,000MHz), is Intel Optane Memory ready, and supports both the new Skylake-X and Kaby Lake-X CPU. 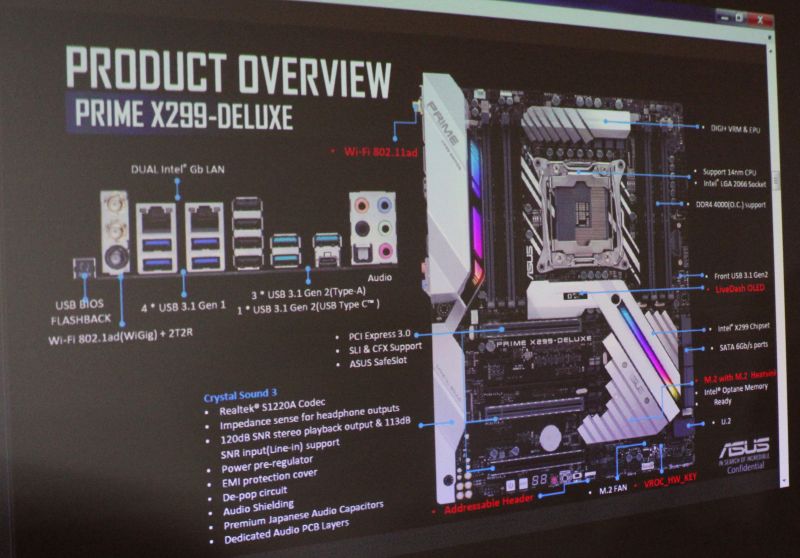 What separates it from the X299 TUF, however, is the fact that this motherboard was built more in-line with the more easy-going PC enthusiasts. To that end, the motherboard comes with features such as the LiveDash OLED, of which you can customize what it displays via the onboard software. 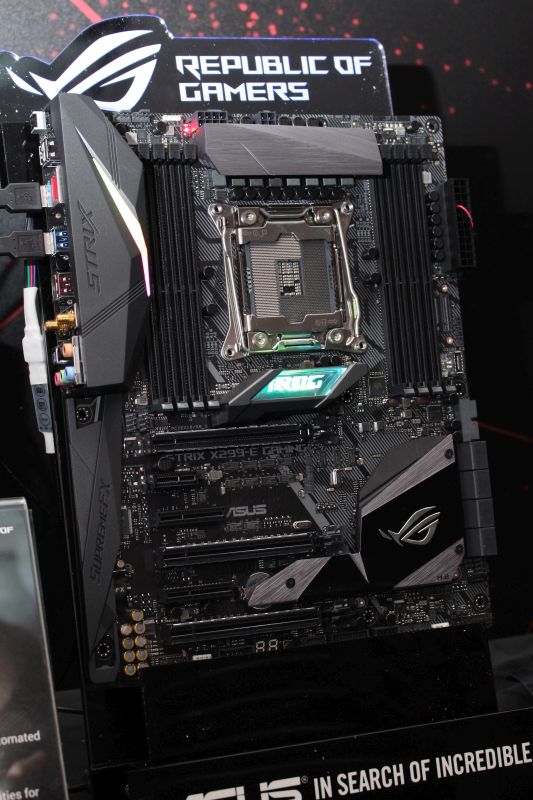 Eventually, ASUS soon directed our attention towards its ROG Strix X299-E Gaming and ROG Rampage VI Apex motherboards. As you would expect, the ROG Strix X299-E Gaming is a motherboard that isn’t just focused on providing the consumer with the best performance that the new Skylake-X and Kaby Lake-X CPUs are able to churn out, but also a more aesthetically pleasing experience with ASUS’ Aura Sync RGB LEDs and its beautifully cut PCB heatsinks. 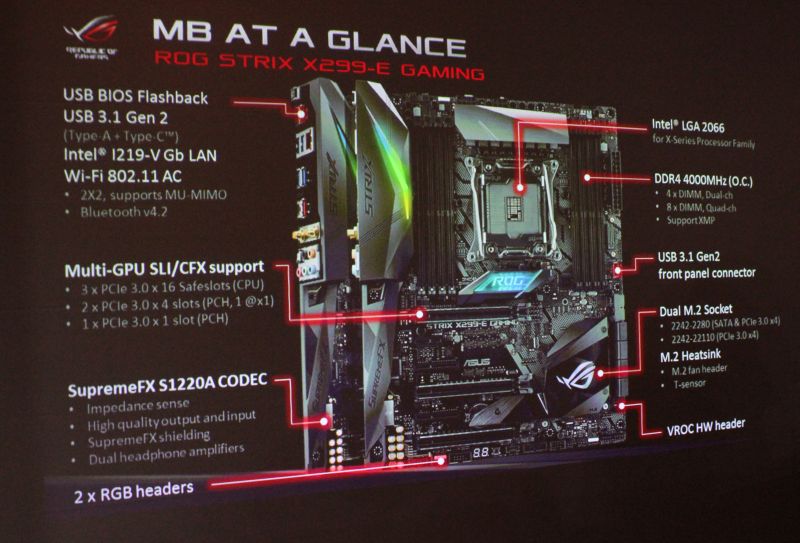 As you can see from its spec sheet, it comes loaded with a plethora of features, including multi-GPU support for both NVIDIA’s SLI and AMD’s CrossFireX, and also support for up to 44 PCIe lanes for Skylake-X and up to 16 PCIe lanes for Kaby Lake-X. 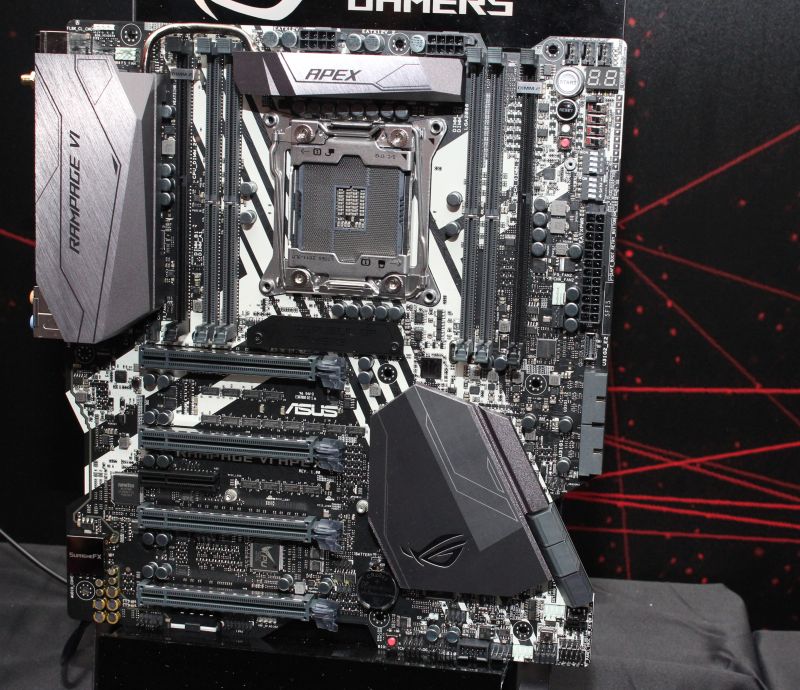 The Rampage VI Apex is unique in that it actually only comes with four DDR4 DIMM slots (two on each side). Where the additional four DIMM slots should be, sits two DIMM.2 slots that are designed to house two M.2 SSDs. By actually propping up the M.2 SSDs in this way, ASUS was also able to provide these DIMM.2 boards with additional (and optional) 50mm fans (these come bundled with the motherboard) that can be easily attached to the boards. 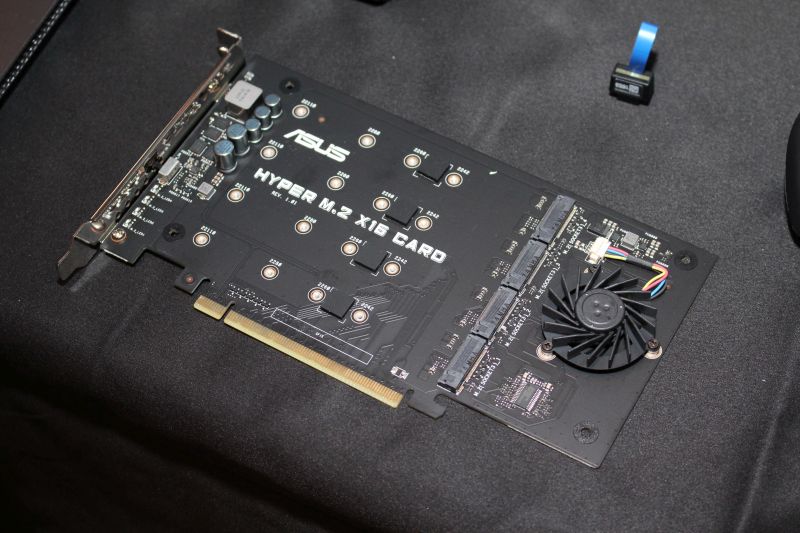 Throughout the presentation, ASUS also gave us a presentation of just how fast its Hyper M.2 x16 card actually was. To put it simply, this PCB board was designed to house up to four M.2 SSDs at a single time and, if need be, can be set to function in the RAID 0 storage format, giving users access to blindingly fast transfer speeds and incredibly quick boot-up times. During the demonstration, this card was actually registering sequential read and write speeds of 12GB/s, a speed that is insanely fast. Alas, there was actually a catch to the setup: In order to achieve those speeds, the Hyper M.2 x16 card requires Intel-based M.2 SSDs, and nothing else. ASUS explains that the lack of third party SSD supports is due to the fact that with Intel-based M.2 SSDs, the card will then be able to make use of Intel’s new VROC feature. There’s more: the RAID configuration that ASUS had set up the Hyper M.2 x16 card in was RAID 0. The card can actually be set up with more than one card, but in order to do that, you will need to purchase a special key (that is sold by Intel). 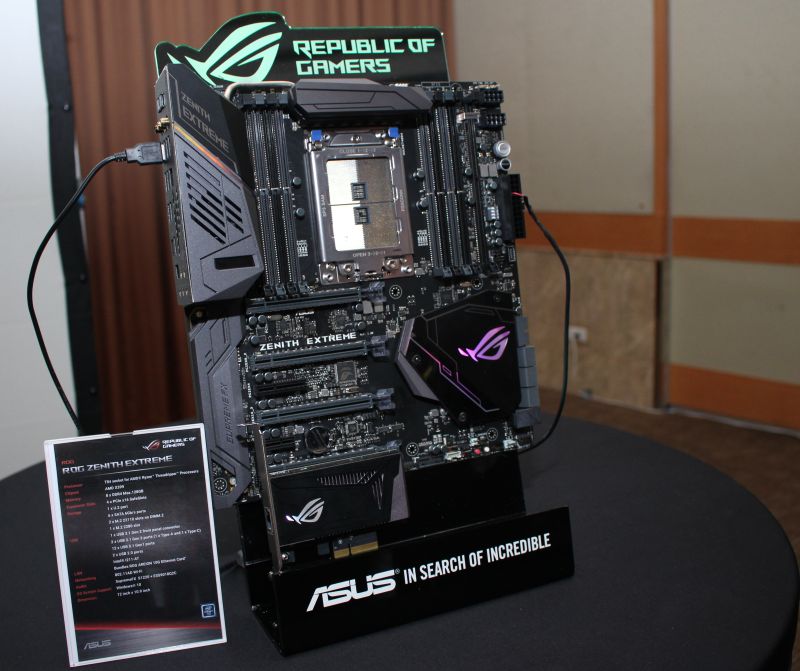 Nearing the end of the workshop, ASUS further surprised us when they gave us a glimpse of its Zenith Extreme, its new X399 motherboard that’s designed to support AMD’s new and upcoming Threadripper CPU. Just by looking at the CPU, you actually get an idea of how big the processor is going to be, but more importantly, it’s also clear that the upcoming CPU will using an LGA (Land Grid Array) layout, rather than the PGA (Pin Grid Array) layout that AMD has been using with its current Ryzen CPU lineup. 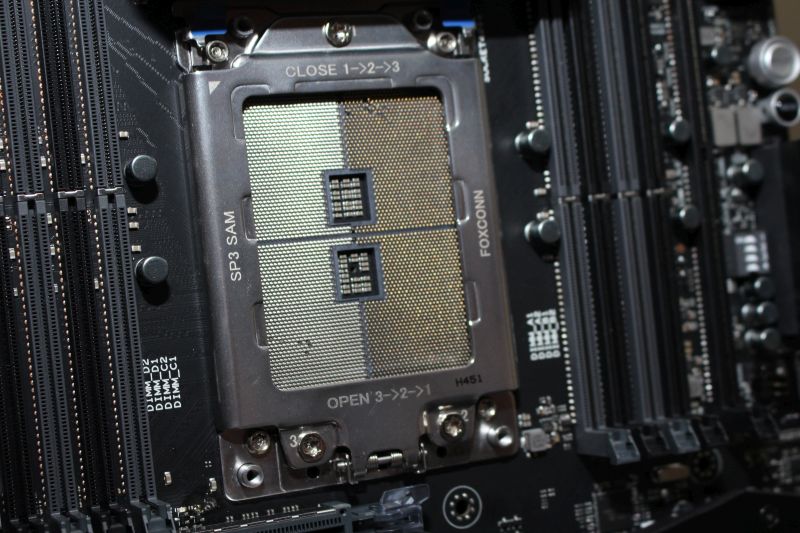 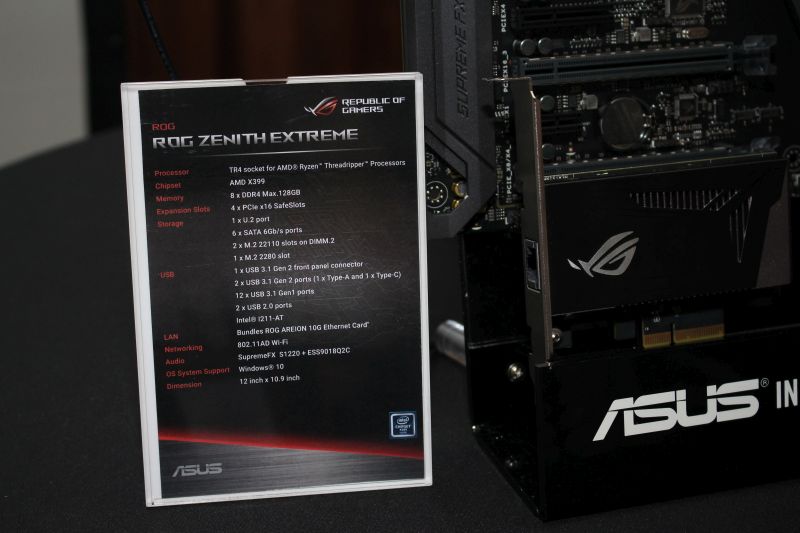 Sadly, ASUS did not reveal a lot of details regarding the motherboard’s specifications, but given that AMD’s own press event will be commencing in just several more hours, we’ll be getting our information about both the CPU and the motherboard then.