Another year, another company’s headquarters to visit during the COMPUTEX event. Just as we did back during COMPUTEX 2015, we were once again invited to ViewSonic’s HQ in Taipei, Taiwan, for yet another look at some of the new displays which they had concocted for the market.

As we know, it just wouldn’t be a ViewSonic move if the company did not come up with some new desktop displays that were catered to the gaming crowd. To that end, we saw several gaming monitor put up on display from ViewSonic, the first being the VX2757 Full HD gaming monitor. With a 1ms response time and screen flicker elimination, this display was designed for competitive gamers who plays fighting titles such as Street Fighter, as these gamers tend to keep track of the number of frames that register with character specific moves, in order to perfectly execute a combo with another special move. To put things into perspective: Ryu’s Fireball animation take three frames to complete, while the animation for his Rising Dragon Uppercut takes about five frames. If the display’s response time is good, the player will be able to chain the Fireball and uppercut moves seamlessly once the player sees the third frame of Ryu’s Fireball move. 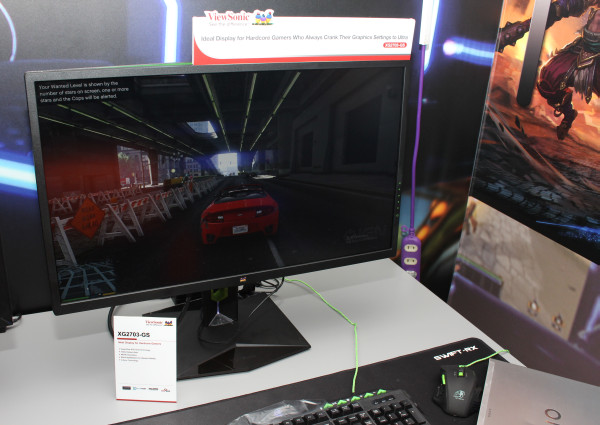 On that note, ViewSonic also showed us some of their projectors which they had on hand, chief among which being a modular projector. This particular projector, as a ViewSonic rep explained, could easily have its parts swapped out or inserted without the need of a screwdriver (technically). He demonstrated further with the modular projector how, with the world of technology going virtually wirelessly, ViewSonic had installed a special hub that would allow anyone to connect their device to the projector wireless, be it through their own proprietary receiver, Google’s Chromecast, or even a Bluetooth dongle that serves as a connecting point for notebooks. It’s not just wireless connectivity either. One particular projector had a special feature that allowed users to simply plug a USB storage device directly into it and run the programs and files directly off from it as well. ViewSonic also had a short throw laser projector on site, and even demonstrated how sharp the image quality was on it. To the naked eye, we initially thought that they had made a 4K TV with pretty decent quality, but then realized that it was quite impossible, as the projection itself measured in at 100-inches across the projection area. The last item that also caught our eye was ViewSonic’s large format interactive displays, which were clearly designed with education in mind. During its presentation, it became clear that all of large format displays could easily serve as a replacement to the archaic chalkboard that’s been commonly used in so many classrooms (even till today). You could access the Internet on it, make notes on a webpage and save it, or just write down the topics on a blank screen.

That’s pretty much all of the things which we found interesting at this year’s visit to ViewSonic’s HQ.

Previous Story
COMPUTEX 2016: Palit shows off new GameRock and JetStream GTX 1080 cards
Next Story
Huawei P9 Plus to go on sale from June 10, priced at RM2,599