Think OLED TVs represent the best in picture quality today? Samsung wants you to think again. The Korean company today unveiled the QLED series, its latest range of flagship 4K HDR TVs for 2017. The TVs come in three variants - the Q7, Q8, and Q9 - and Samsung is unabashedly touting them as being better than OLED displays.

That may not all be just marketing talk though, and the QLED series offers up improvements in brightness and color accuracy, among other things. The new TVs boast a peak luminance between 1,500 and 2,000 nits, compared to the 1,000 nits on last year’s SUHD models.

This means more vibrant colors and more details, especially for bright scenes in HDR content. Furthermore, the QLED TVs reportedly can display 99 percent of the DCI-P3 color space with 100 percent color volume regardless of brightness level. 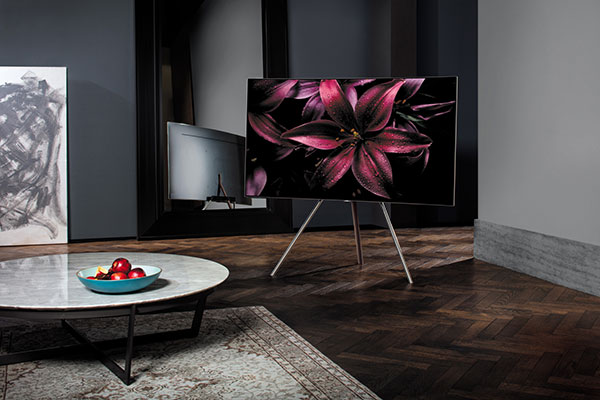 The technology underpinning it all is a new iteration of quantum dot technology that uses a new metal-coated quantum dot material. The improved structural integrity of the nano-crystals in turn improves light purity, which means the TVs are able to display a greater range of colors. However, note that these QLED TVs are still LED-LCD TVs at heart, which means they're transmissive and not emissive like LG's or Sony's OLED TVs.

Samsung also touts wider viewing angles and deeper black levels on these QLED TVs, things that OLED traditionally excels in. For the former, it's likely that Samsung has tweaked the panel structure; and with the metal quantum dots, managed to project light at wider angles as well as rein in light leakage. The black level improvement is likely to also come by way of the aforementioned as well as further adjustments to counter in-panel reflections. 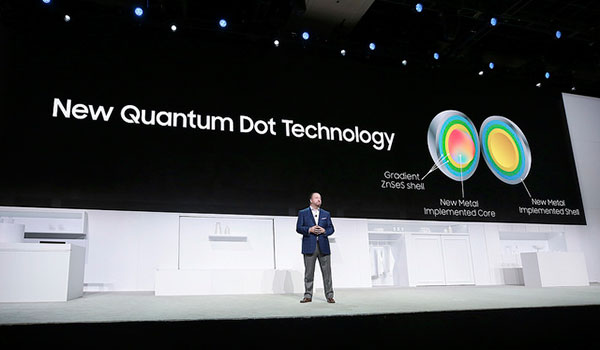 Samsung has also improved the overall design and mounting options of the QLED TVs. All the new QLED models use a transparent “Invisible Connection” fiber optic cable that connects to a breakout box with HDMI ports and other key inputs. Power is a separate input altogether, but the cables in question are quite thin, so you’ll still be able to mount the TVs on your wall for a clean look.

Having said that, Samsung went a step further with a “no-gap wall mount” that lets the TV sit almost flush with your wall. The mount does not protrude off the wall anymore and is instead embedded in the TV’s back, and Samsung says that it can even automatically adjust itself to let the TV sit straight.

For those who prefer not to mount the TV, Samsung is offering two new stands designed to elevate and showcase the QLED TVs: a "Studio Stand" that resembles an easel with a painting and a "Gravity Stand" that when attached makes the setup resembles a contemporary sculpture.

To further ease the user experience, Samsung has also improved its Smart TV interface with a new Smart View mobile app that lets users search for content on their phones.

Unfortunately, Samsung stopped short of confirming details like sizes, pricing, and availability. All we know at this point is that the flagship Q9 will be a flat panel, while the Q8 will be curved. The Q7 will be available as both flat and curved models.