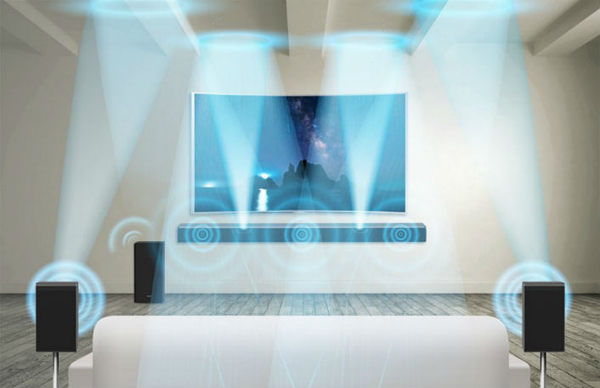 If you’re a moviegoer who swears by Dolby Atmos theaters and nothing less, it would probably be safe to assume that you have a discerning taste for immersive audio, and that you also have a formidable home theater system at home -- one that would at least be capable of belting out window-rattling 5.1-channel surround sound.

If you have been wanting to up the ante, Samsung’s new HW-K950 soundbar would certainly do your ears justice, as it’s the first soundbar from the company to feature Dolby Atmos technology, which creates the sensation of sound coming from above you through the use of upward-firing speakers.

Don’t be too quick to downplay the audio prowess of the HW-K950 just because it’s a soundbar though, as it’s substantiated by two other Atmos-capable wireless speakers and a wireless subwoofer, which would cumulatively provide you with 5.1.4-channel audio.

While Samsung has yet to reveal the price of the HW-K950 soundbar, you can be pretty certain that it’s not going to come cheap, considering the impressive audio technology that’s packed into it. Nevertheless, Samsung is expected to unveil its price during their CES 2016 showcase later this week.

Source: The Verge via Samsung

Previous Story
Ashley Madison garners four million new users, may or may not be bots
Next Story
Hacker successfully installs Windows 95 on the Nintendo 3DS