Canon has just announced the post-event report for the PhotoMarathon 2011, which happened around Kuala Lumpur last Saturday (October 15, 2011). 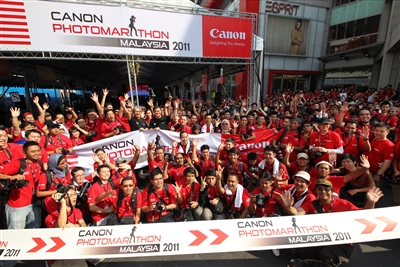 “In conjunction with the breast cancer awareness month of October, this year Canon Marketing Malaysia made the decision to charge a small participation fee as a way to support the efforts of the National Breast Cancer Research Foundation. This is one of the ways of living out our corporate philosophy of kyosei, living and working together for the common good. As an organization, we are not only about driving profits but we want to make an impact in our community,” said Melvyn Ho, President & CEO of Canon Marketing Malaysia. 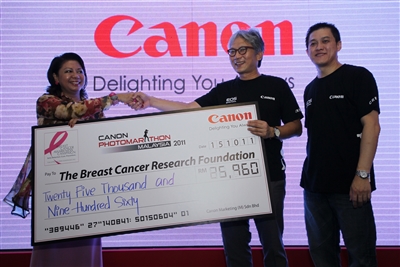 Throughout the day, three themes were announced for the photographers, which include The Earth Guardian, City of Colors, and Extraordinary of the Ordinary. After a long day of moving back and forth between the starting position and good photography spots, the day finally drew to a close at 8pm.

In addition to this, participants were also given the opportunity to print out their photos with the Canon PIXMA printers at a price of RM10 per A4 printout and a photo frame, where proceeds went to the National Breast Cancer Research Foundation.

Winners of the Canon PhotoMarathon 2011 will be announced on October 22, 2011 while the 'Canon Signature Gallery' photo exhibition will be held from October 19 to October 23, where top photography works by four of the judges, including Zainal Abdul Halim, Peter Tan, Harry Woo and Ng Kok Leong along with the previous PhotoMarathon winners, will be exhibited.

For more information or to view the photo gallery online, please visit www.eosworld.com.my.