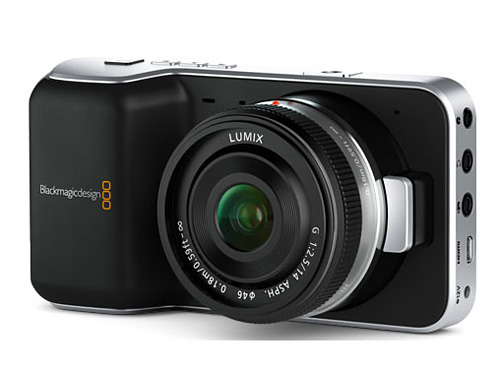 Blackmagic Design has announced a pocket-sized 1080p video camera which uses an 'active' Micro Four Thirds (MFT) mount, giving the user full aperture control of MFT lenses. The professional camera can record in 422 ProRes at 220 Mbps and BlackMagic Design says lossless CinemaDNG will be added in the future via a firmware update.

The Blackmagic Pocket Cinema Camera uses a Super 16-sized sensor (around 12.5 x 7.4mm), with 13 stops of dynamic range and records to an SD card. It offers magnified focus, focus peaking, can output HDMI for external monitoring and 3.5" audio input, however it can only shoot between 24 and 30fps. It will cost US$995 and be available in July.

Journalist Dan Chung has a preview of the new Pocket Cinema Camera on his site News Shooter:

Besides the Pocket Cinema Camera, Blackmagic Design also unveiled a new Production Camera 4K, which features 12 stops of dynamic range, a Super 35-sized sensor and a global shutter. The camera can store an SSD to record footage, and uses a touchscreen interface on the back monitor. The Production Camera 4K can capture in Apple ProRes 422 HQ or losslessly compressed CinemaDNG Raw, uses a Canon EF mount, and includes a Thunderbolt connector. It will be priced at US$3,995 and available in July.

Blackmagic Design's first Cinema Camera was announced last year, it could shoot up to 2.5k resolution for US$2,995, but was plagued with release issues like dirty sensor glass and problems with infinity focus. 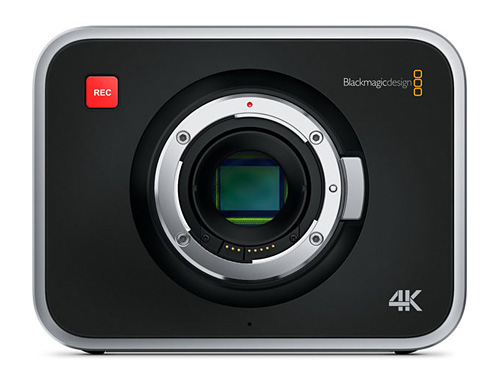