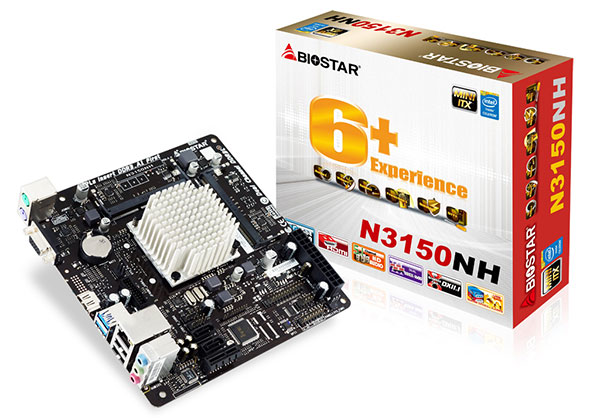 Biostar has released the N3150NH, a mini-ITX motherboard with an integrated, passively-cooled Intel Celeron N3150 CPU. The motherboard clearly derives its name from its pre-installed CPU, which is a 1.6GHz quad-core part with support for up to 8GB of DDR3L-1600 memory. However, if you’re willing to deal with lower clocked memory, you can install up to 16GB of DDR3L-1066 RAM.

The processor also comes with 2MB of L2 cache and supports a burst frequency of up to 2.08GHz. Don’t expect much from it in the graphics department though – it features a fairly lightweight Intel HD Graphics with just 12 execution units.

In addition, you’ll be able to add on a Wi-Fi expansion card via the single PCIe x1 2.0 slot, and up to two SATA storage devices thanks to the two SATA 6Gbps connectors.

When it comes to connectivity options, the N3150NH has two USB 3.0 and another two USB 2.0 ports on its rear I/O panel. There’s also an additional USB 3.0 header on board for further expansion. Video output options are also quite limited – there is just one HDMI port and one VGA port at the back.

Biostar looks to be targeting legacy devices with this board. In addition to the VGA port, there are two PS/2 ports for connecting both keyboard and mouse.

Onboard audio is functional, but not ground-breaking. The board relies on the Realtek ALC662 six-channel HD audio codec, an ageing codec that was originally designed to work with Windows Vista desktops and mobile PCs. 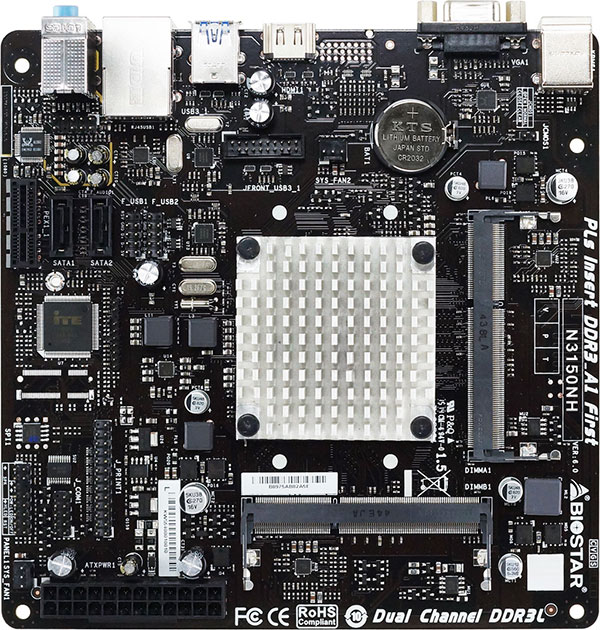 However, the board does come with useful features like SmartSpeed LAN, a network prioritization software, and Charger Booster, which enables you to charge your Apple device faster.

Biostar is also claiming a moisture-proof PCB design that enables the board to be used in extremely humid environments like coastal areas. One other useful feature that deserves mention is BIO-Remote 2, which allows Android or iOS users to control their PC and gain access to things like mouse and PowerPoint slideshow controls.

The Biostar N3150NH is available now at US$69. At this price, it certainly looks like it will appeal to users looking to build a no-frills, functional HTPC or office PC.

Previous Story
In Japan, almost no one wants an Xbox One
Next Story
OnePlus 2 is the first flagship smartphone to have a USB Type-C port