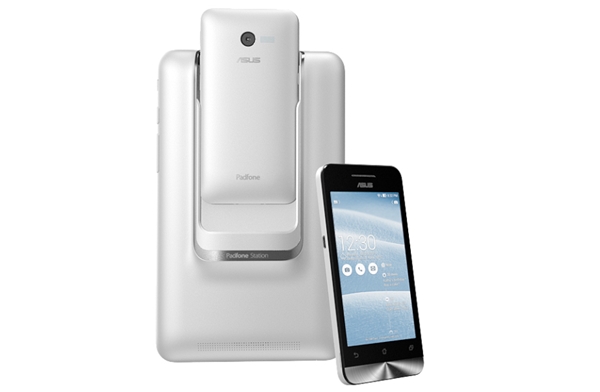 ASUS today announced its latest member to the PadFone family, the PadFone Mini at the Consumer Electronics Show (CES) 2014.

Like the Fonepad 7, the 4-inch PadFone Mini runs on an Intel Atom Z2560 dual-core 1.6GHz processor and 1GB RAM. At launch, the PadFone Mini ships with Android 4.3 Jelly Bean and ASUS's own customized interface, ZenUI. It is slated for an upgrade to Android 4.4 KitKat.

The PadFone Mini sports a 4-inch IPS+ display with a resolution of 800 x 480 pixels. For an expanded view, users can dock the smartphone into a 7-inch tablet with a display resolution of 1,280 x 800 pixels.

ASUS also introduced a brand new user interface, ZenUI on the PadFone Mini with simplified icons and menus, five device-matching color themes, and a clever What’s Next feature that helps users keep track of their lives.

While it only has 8GB internal storage, the PadFone Mini has a micro-SD card slot that supports memory cards up to 64GB in capacity. Other specs include an 8-megapixel rear camera with F2.0 aperture, a 2-megapixel front-facing camera, dual-SIM support and Bluetooth 4.0.

ASUS states that the PadFone Mini will be available in five colors: black, white, red, blue and yellow. It is expected to be available worldwide in Q2 2014.