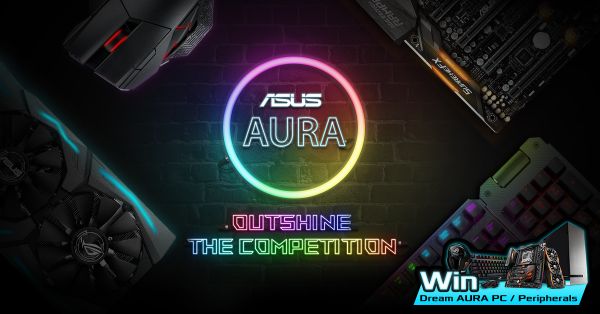 RGB lighting on computer components has definitely been the trend of 2016, and ASUS intends to keep that momentum going with their new Aura Sync synchronized RGB LED lighting platform, and to do that, the company recently launched their new 'Outshine the Competition' campaign

ASUS’ new Aura Sync works by combining and controlling the LEDs on an Aura Sync-capable motherboard, allowing the lighting effects to pulse and glow in perfect harmony. This feature can also be achieved via ASUS’ easy to use Aura Sync software.

Interested in owning one of ASUS’ Aura equipped products? Then head on over to their campaign's website and simply follow the instructions to stand a chance to win some new Aura products, including a new Aura Sync motherboard, or an Aura Sync-enabled dream PC package.

The Aura Sync is available to any ASUS and ASUS ROG product that is already equipped with Aura RGB lighting. ASUS has also teamed up with RGB strip-makers and case manufacturers, including CableMod, IN WIN, DEEPCOOL, NZXT, and BitFenix.

Previous Story
Windows 10 and Xbox One will support Dolby Atmos in 2017
Next Story
Dialog, an Apple supplier has invested in wireless charging firm Energous