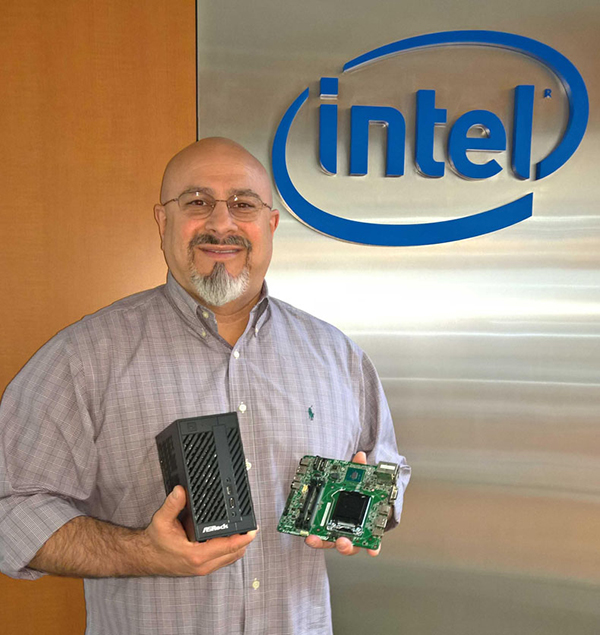 At CES 2016, Intel hinted at a new mini-STX motherboard form factor that would enable small form factor PCs to be truly customizable. Now, after a few months of further work, ASRock and Intel have unveiled the DeskMini, an ultra-compact PC that supports Intel LGA 1151 CPUs and has space for Intel’s stock cooler.

The DeskMini features a tiny 1.82L chassis that is just large enough to fit a mini-STX (Socket Technology Extended) motherboard, the stock cooler, and two 2.5-inch storage drives. There are also two M.2 slots on the board itself, one for M.2 SATA devices and the other for M.2 Key E products, which usually take the form of Wi-Fi or WWAN cards. Of course, such a compact PC has limitations as well, and there isn’t any room for PCIe devices. There’s actually nothing revolutionary about the DeskMini’s size. There are already plenty of other equally compact systems out there – MSI's Cubi 2 Plus for instance – and the DeskMini is relying on its support for more powerful socketed desktop CPUs to edge out the competition. Most, if not all, other systems of this size use soldered CPUs, which means that upgrading is out of the question. These are also usually mobile or ultra-low power processors that help keep heat production inside the case to a minimum, so they don’t offer much in the way of performance either.

On the other hand, ASRock is confident that it can offer desktop Skylake CPUs in the DeskMini and keep them cool as well. This makes the design a lot more attractive to enthusiasts, who will appreciate being able to upgrade their CPU further down the road.

Unfortunately, ASRock hasn’t set a price or release date, but we’ll probably find out more at Computex in June.

Previous Story
Lenovo's Snapdragon 820 flagship phone, the ZUK Z2 Pro has been unveiled
Next Story
The Hover Camera is an autonomous drone that hovers