Arctic presents its latest VGA cooler - the Accelero Xtreme 7970, and it will be available from 31st January. 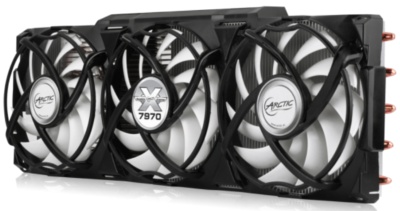 Compatible with the just announced and soon to be available AMD Radeon HD 7970 graphics card, this VGA cooler employs three 92mm PWM fans with a low noise impeller, five heat pipes and 84 fins for an enhanced heat dissipation. From our tech updates from AMD, we understand that the new cards will feature a renewed reference cooler, but with the availability of after-market options being announced even before the card hits the retail shelves, we got to wonder if AMD can't yet make an efficient default cooler? We'll find out pretty soon as we wrap up our own testing of this new graphics card.

Back to the Accelero Xtreme 7970, it features pre-applied Arctic MX-4 thermal compound to make contact with the GPU, while removable Arctic G-1 thermal glue optimizes RAM and voltage regulation modules' thermal conductivity. Last but not least, a patented fan holder promises to eliminate any buzzing sounds that fans are prone to produce.