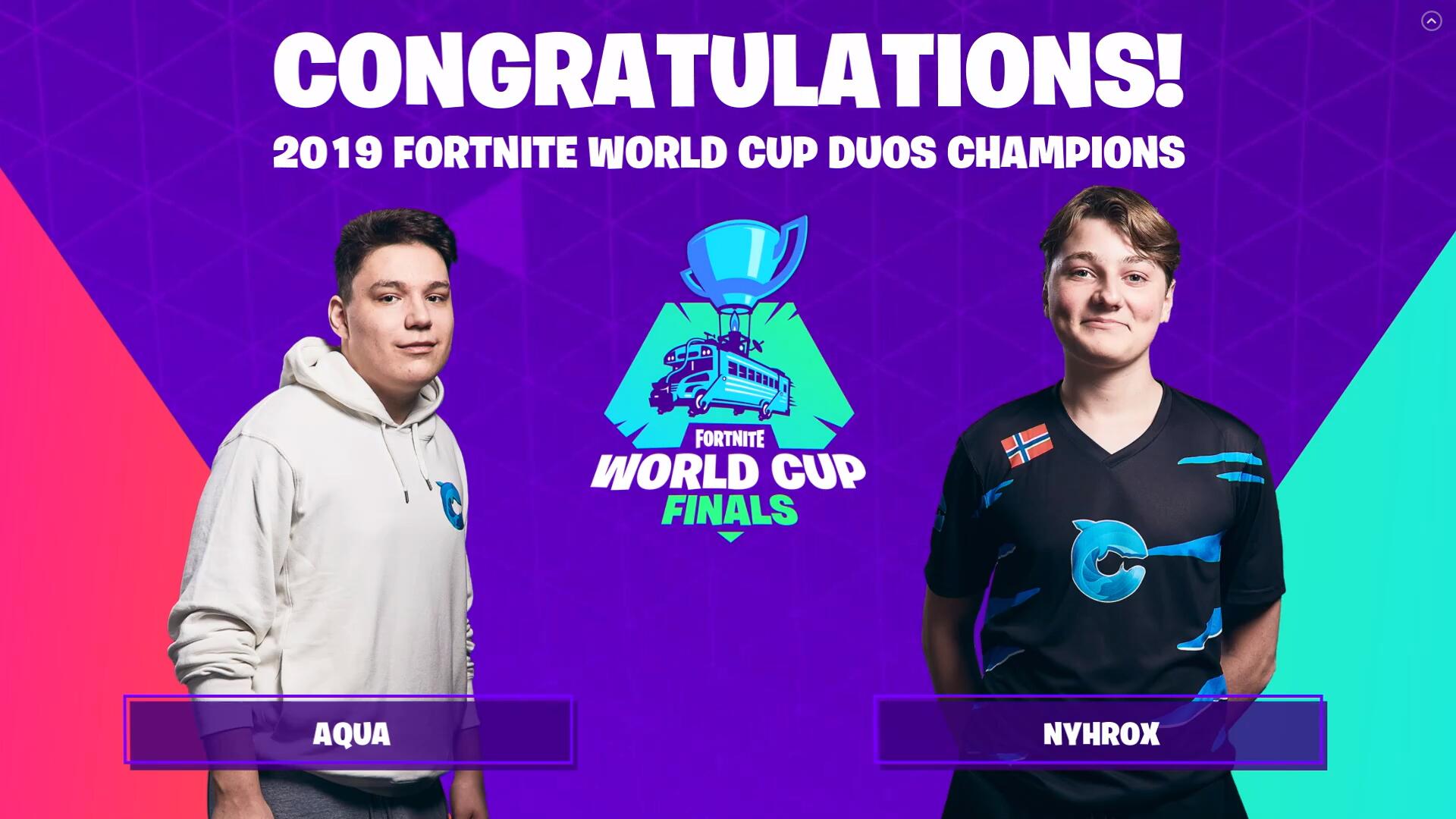 The Fortnite World Cup Duos finals were full of drama and excitement. In Duos, players had to compete by getting eliminations and placement points over the course of six grueling matches to win. Eventually, winners Nyhrox and Aqua came through to win first place in placements a prize pool of US$3 million!

European players dominate the Duos finals, with Nyhrox and Aqua earning first place, while Rojo and Wolfiez earned second place and the prize pot of US$2.25 million. Elevate and Ceice from NA East secured third place and US$1.8 million, while Saf and Zayt took fourth place and US$1.5 million. Think about it; winning fourth would have made you a millionaire. 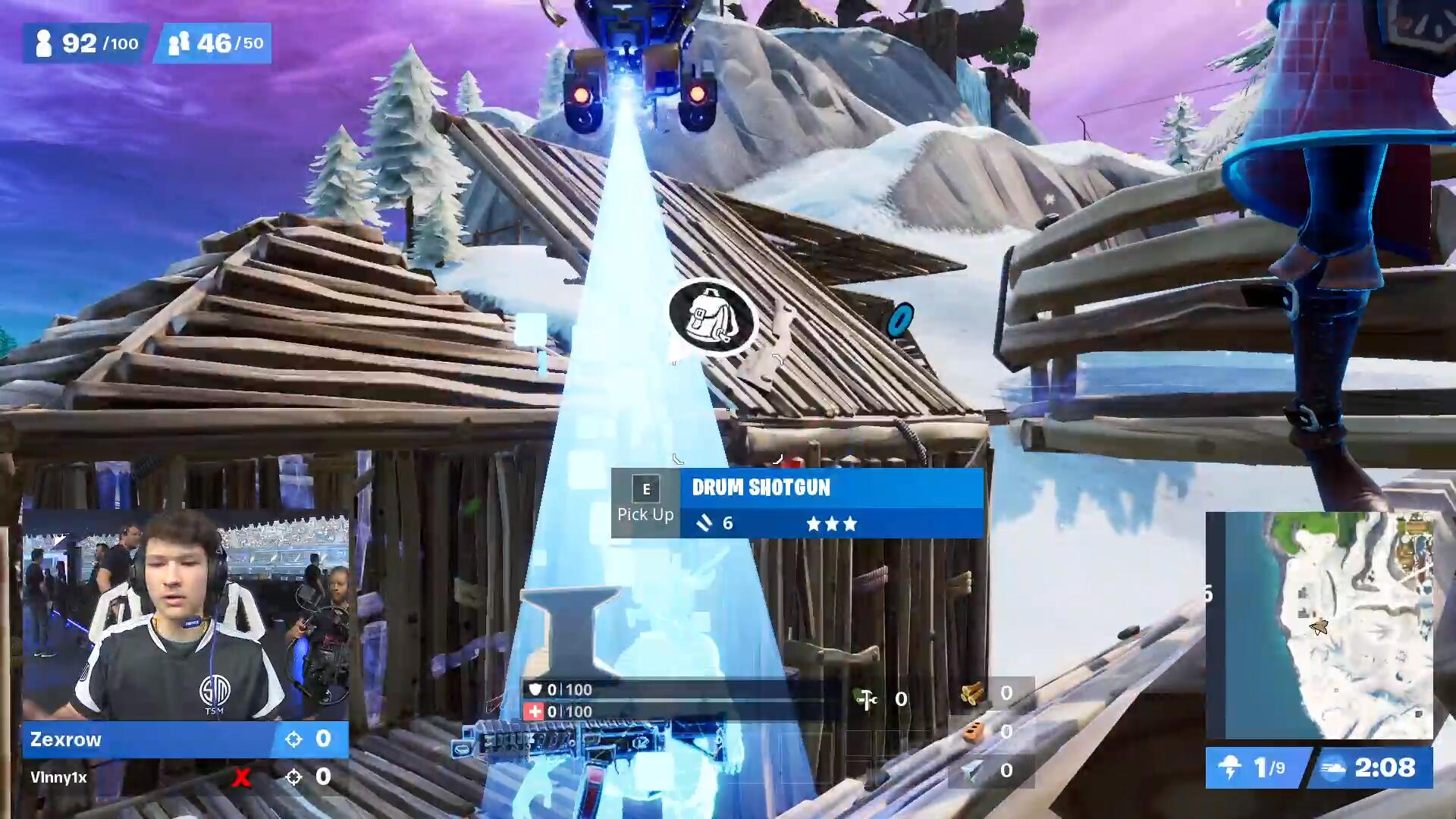 Game 1 started with a bang as famous players like Zexrow immediately went down just a few minutes after landing. Things proceeded slowly after that though, with everyone playing it safe, trying to make it to the endgame. Unfortunately, that couldn’t last for too long due to Fortnite’s new ‘storm surge’ mechanic present in competitive matches like these.

Storm surge makes it so that players who deal the lowest damage in a match regularly receive damage until the storm surge ends. This was obviously done to prevent players from playing games too passively, instead forcing them to be aggressive and create matches that are more fun to watch.

Storm surge worked only to an extent however, as more than 60 players managed to make it into the late game, fighting it out in an ever-shrinking circle. Saf and Zayt held the high ground, raining bullets down on unsuspecting duos still fighting it out on the ground. In the end, it came down to Scarlet, Mitr0 and Megga, facing off against Saf and Zayt from above. Mitr0 and Megga fell within seconds, and Zayt and Saf used their high ground advantage to knock out Scarlet immediately after, taking home the win. 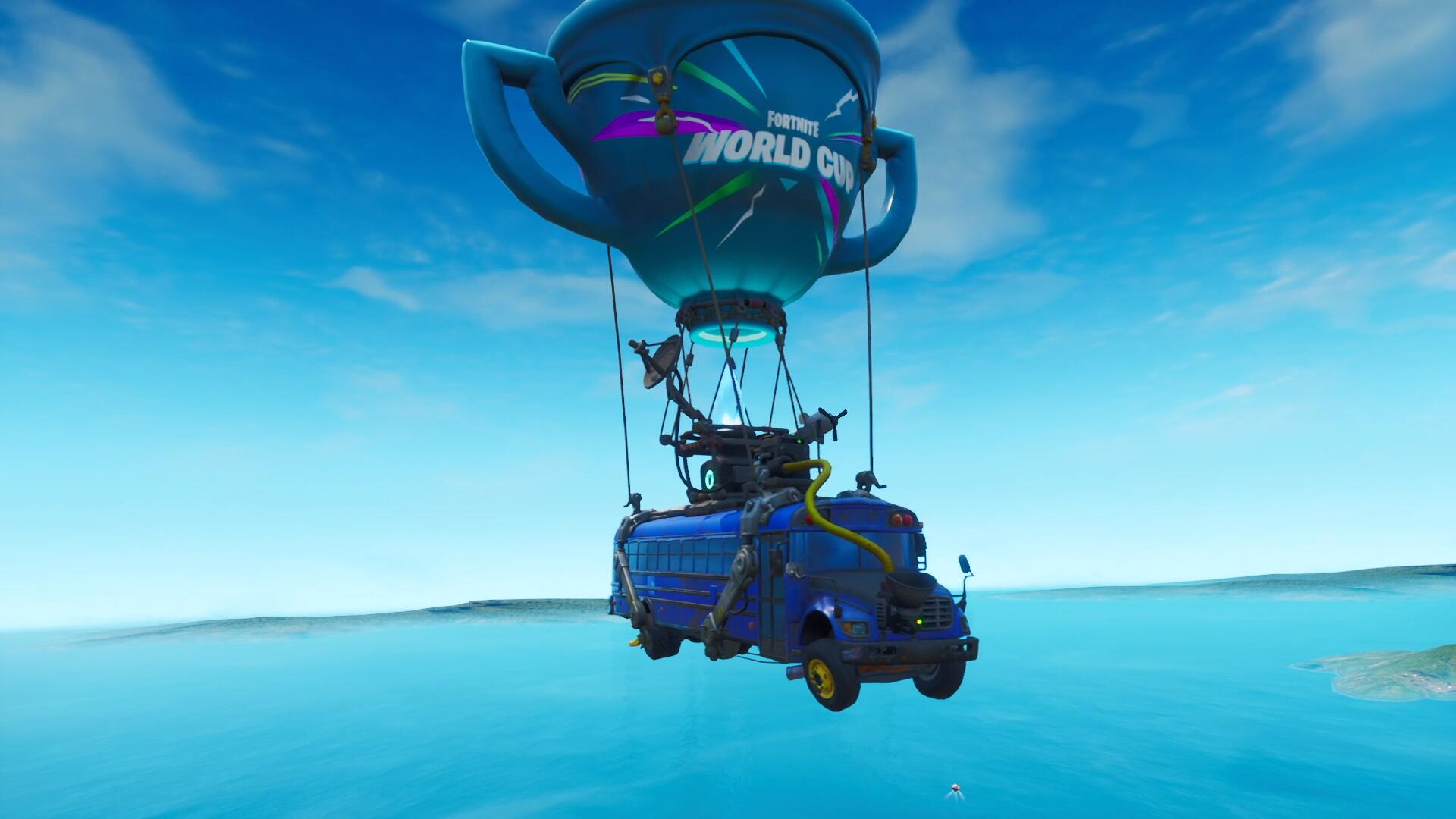 Game 2 had Zayt and Saf with a distinct advantage and a lead in points, but they were soon overtaken by Zexrow and Vinny1x. Zayt and Saf tried their previous strategy again by going for the high ground but were taken out by Znappy. Znappy didn’t hold out for much longer though, and Zexrow and Vinny1x ended up taking the win.

Game 3 immediately saw Mexe and KBB go down early, and the deaths just kept on coming. The late game saw Calculator and Mackwood earn the high ground by the skin of their teeth, taking down opponents below with ruthless efficiencies. Eventually, their hard work paid off and they won Victory Royale.

Game 4 weren’t without controversies. For the uninitiated in Fortnite ‘politics’, XXiF and his partner Ronaldo were unpopular in this Fortnite World Cup, to say the least. This is due to the both of them having been banned previously for two weeks for collusion. Both made it to the Fortnite World Cup anyway and were booed unanimously by the audience whenever they appeared onscreen. Hilariously, the audience also erupted into cheers and applause when they died. Despite the big drama, Aqua and Nyhrox came out of Game 4 with a Victory Royale.

Game 5 culminated in a similar way, with Aqua and Nyhrox claiming the high ground by the end of the game and destroying players below. At this point, whoever owns the high ground in a late game battle is pretty much guaranteed the win, aren’t they? Both players beat out the competition and secured the first ever back-to-back Victory Royale here. 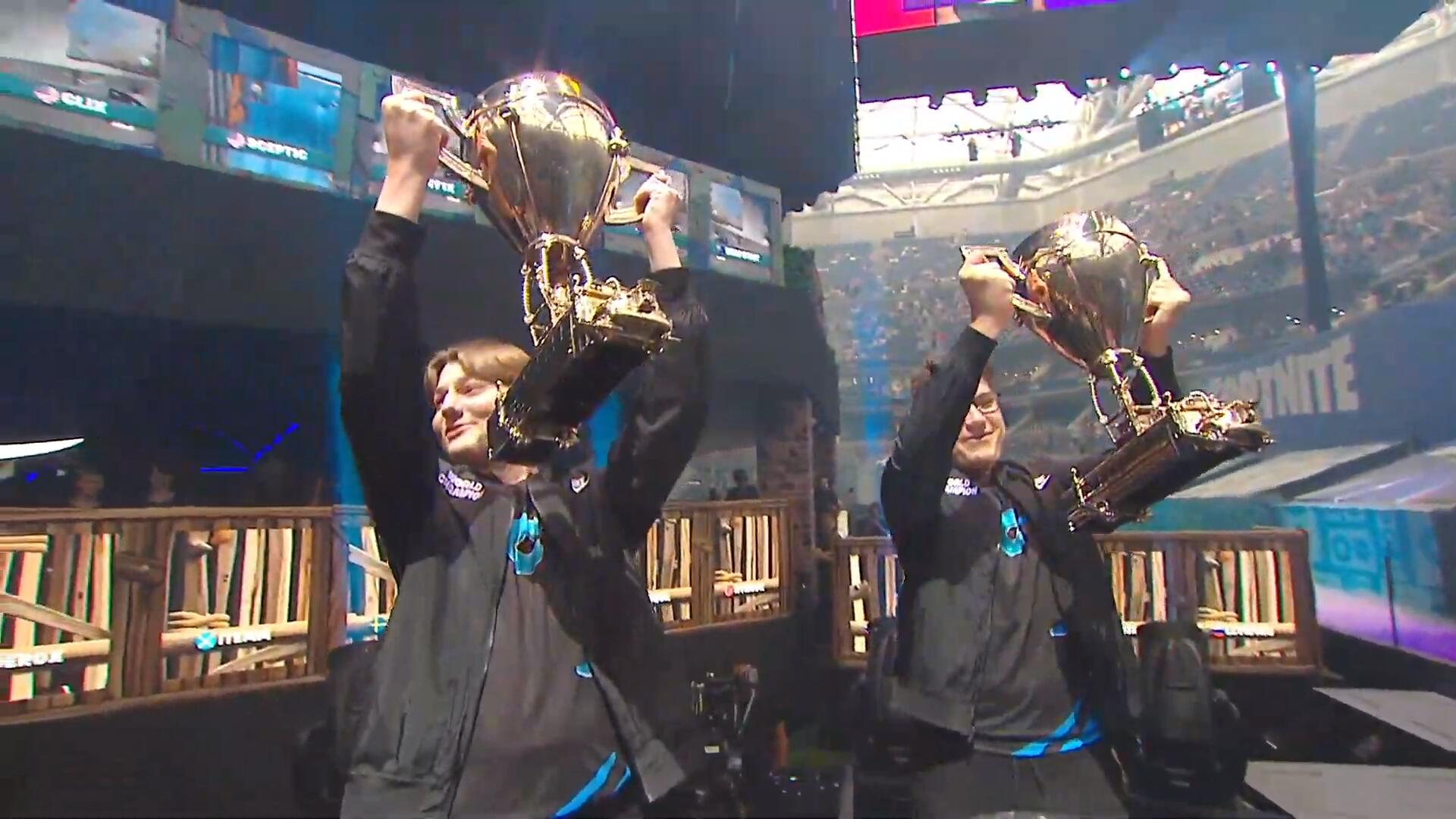 It all came down to the final game. Aqua and Nyhrox had a huge advantage in placement standings, due to their back-to-back Victory Royale wins, but other players still stood a chance with Game 6. Unfortunately, Aqua and Nyhrox did not make it to the end, going down in the late game after a brutal fight. 4zr and Noward ended up winning the final game instead, finishing off Arkhram1x for the Victory Royale. But Aqua and Nyhrox still took top spot in the overall placements and wrote Fortnite history by winning the first World Cup Duos. 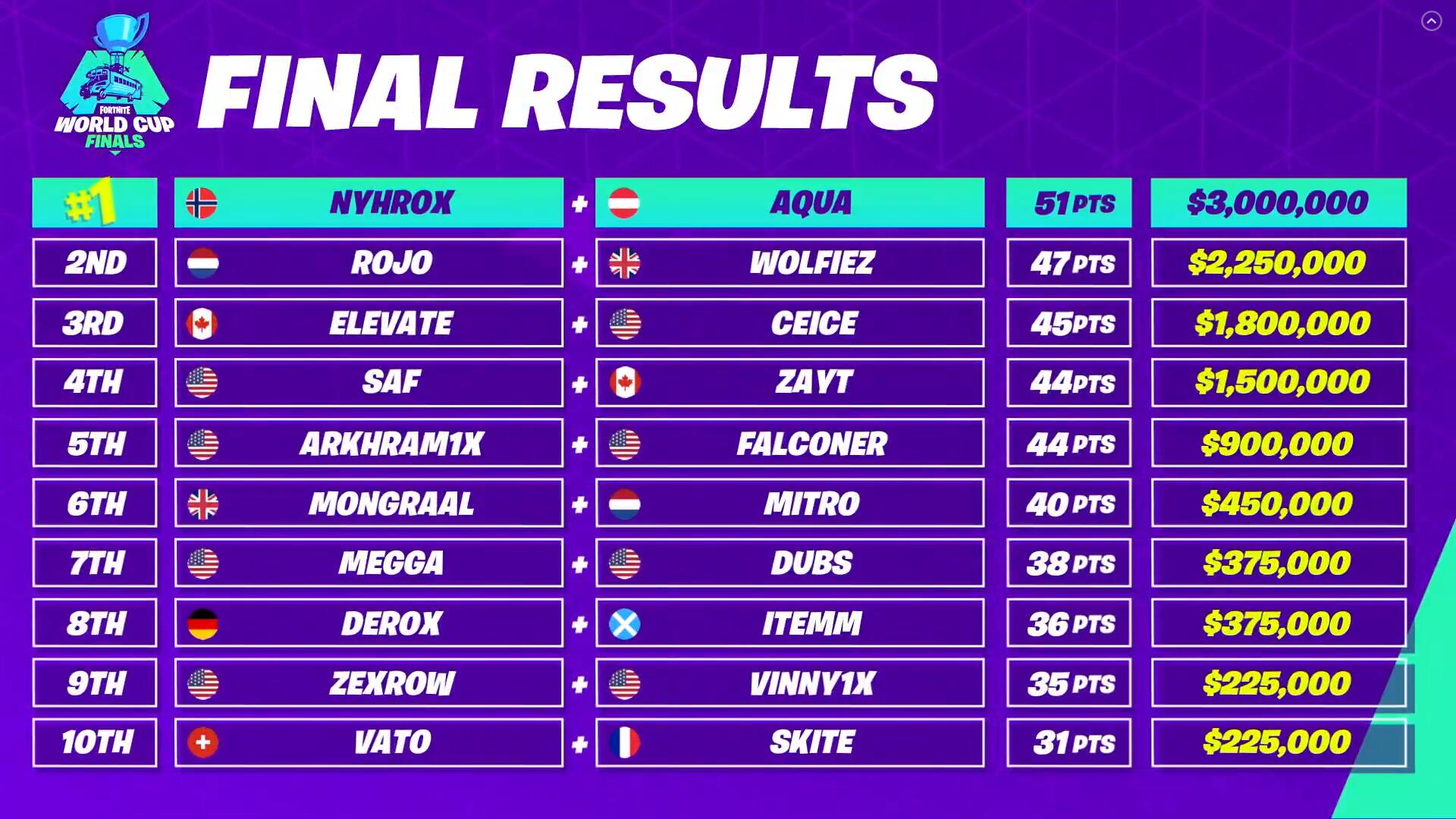 Tomorrow, we’ll see the finale of the Fortnite World Cup with the highly anticipated Solos event. Stay tuned for our match report!