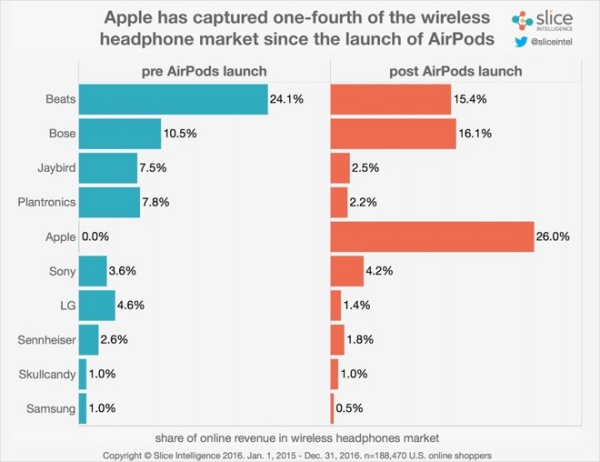 Apple's AirPods entry into the wireless headphone market last month was an impactful one according to research firm Slice Intelligence.

Slice Intelligence claimed that Apple became the dominant wireless headphone brand overnight with 26 percent market share after the launch of the AirPods on December 13. In addition, the launch of the AirPods turned December 13 into the largest single day for online headphone sales in 2016. The sales on 13 December were estimated to be 10 times greater than other major shopping events such as Black Friday and Cyber Monday.

Data obtained by Slice Intelligence indicates that AirPods' owners are mainly males of a young age group compared to the females who are in the "boomer" age group (born during the post-World War II period). The AirPods were described by Apple CEO Tim Cook as "a run away success" for the company, which at time of publication, shows a shipment date of six weeks.