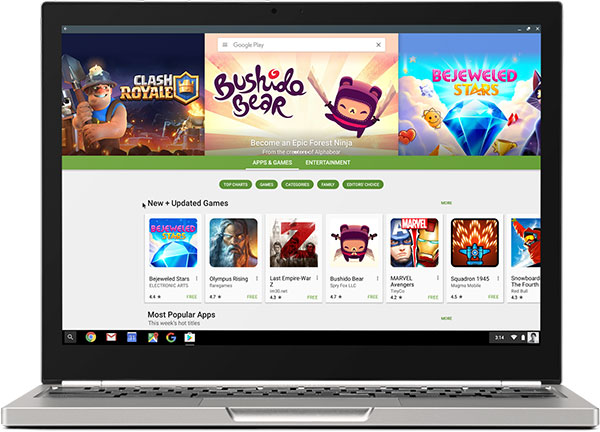 One of the big announcements of this year's Google I/O was the news that Play Store apps would finally be arriving on Chrome OS, including a handful of current generation Chromebooks. Now, thanks to an update from Google engineer Francois Beaufort on his Google Plus page, we know that the first device to officially receive support for all Play Store apps will be the ASUS Chromebook Flip.

However, support is currently limited to the developer channel for now, so the majority of Chromebook Flip owners will still have to wait a few more weeks to begin enjoying the full selection of Android apps.

Having said that, users who want early access to Android apps can just update the Flip to the developer channel of Chrome OS, where Play Store access is already enabled on the latest version.

Beaufort added that support for more devices will follow “very soon”, and other devices that are scheduled to get Play Store access as soon as next month include the likes of the Acer Chromebook R11, C738T, and the 2015 version of the Chromebook Pixel (although user reports suggest this may not be happening too smoothly). A more comprehensive – albeit non-exhaustive – list of devices that are slated to work with the Play Store moving into 2017 can be found here.

Android apps will run natively on Chrome OS and appear as normal windowed programs, and developers will not have to port each app over individually.