Canon Marketing Malaysia has got a lot going for it this year. They’ve just moved to a new place and launched a few new multifunction devices there. And just recently, the company has invited a few members of the media to have a short chat with its new President and CEO, Andrew Koh. 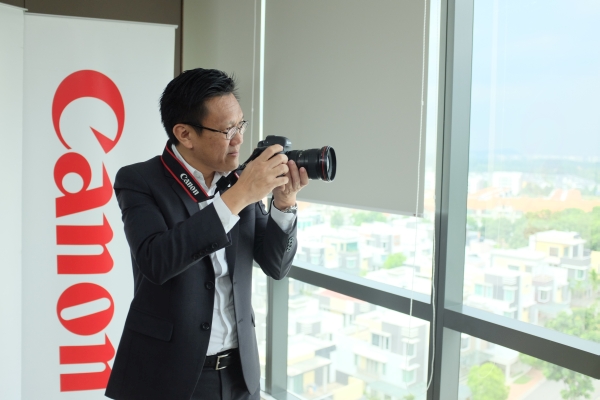 Sharing his vision as the new head of the company in Malaysia, Andrew said that “It’s more about taking the brand forward and to reinforce it as the full imaging solution provider, whether it’s for the B2B or consumer business.” In terms of numbers, he says that Canon is the top brand when it comes to inkjet printers for the past 20 years, holding more than 50 percent of the market share. On the laser printer front, Canon has achieved the number one spot last year. As for cameras, Andrew says that Canon has over 40 percent of the market share, which he intends to push beyond 50 percent in 2017.

Canon is still catching up on the mirrorless camera segment, with only around 10 percent of the market share, but Andrew says he intends to double this figure in 2017.

On smartphones and its relationship with digital cameras in the market, Andrew says that smartphones have taken the lower end of the imaging market, but with mirrorless cameras Canon is still reaching a new group of users, people who are picking up a camera of their own for the first time. Even as cameras in smartphones continue to improve, there will always be constraints on the image sensor size and lens. Despite all this, he also says that as long as people are still interested in photography and taking photos, then there’s still an opportunity for Canon.

Andrew also shared areas that Canon can expand in. Looking at the corporate end of Canon’s business, one area that he’ll look at more closely is SMEs, which is one area with tremendous growth potential. For consumers, Canon is looking at first time users and the younger generation of consumers, for both printers and cameras.