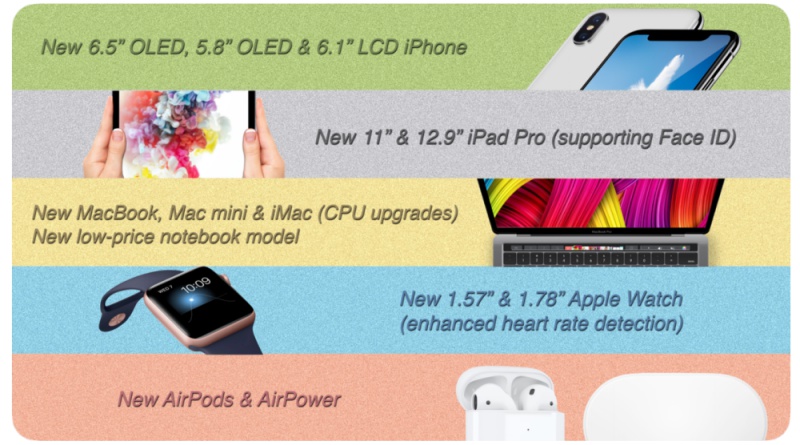 Starting from the iPhone and iPad, Kuo reiterated that there are likely to be three new iPhones (two OLED and one LCD model) and updated iPad Pros with Face ID and no physical home button. Apple could be introducing a new 11-inch iPad Pro to replace the 10.5-inch model.

For the Mac, Kuo thinks that there might be several Mac updates including chip upgrades for the MacBook/MacBook Pro, an iMac with "significant display-performance upgrades", a new Mac Mini and a new low-cost notebook.

Five new iPad and Mac models are recently listed in the Eurasian Economic Commission database.  The new low-cost notebook, which was initially expected to debut at WWDC 2018, was said to have been pushed back to a later launch schedule.

Kuo claimed for the first time that the new Apple Watch models might come with new screen sizes of 1.57-inches and 1.78-inches, and enhanced heart rate detection. The new claims are follow-ups to his earlier report on the Apple Watch Series 4 having 15% bigger screens and new sensors. The enhanced heart rate detection could be the built-in EKG feature that can help medical professionals establish the health of the user's heart, and can potentially spot some cardiac problems early

He also said that the new AirPods and the AirPower wireless charging pad should debut later this year. With such massive updates across multiple product categories, the risks of supply chain issues and delays in availability are high.