AMD has released its first 64-bit, ARM-based Opteron A1100 series processors for servers. These chips support 4- or 8-core ARM Cortex-A57 processors. The company also announced its contribution of a new micro server design, based on the Opteron A-series, to the Open Compute Project. 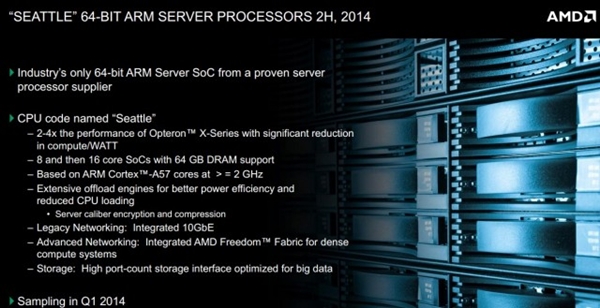 AMD plans to nurture a robust 64-bit software ecosystem for ARM-based designs that can support software services ranging from compilers and simulators to hypervisors, operating systems and application software. These applications are specifically designed to meet the key workloads of data center servers. To speed up such development efforts, AMD will offer an Opteron A-Series development kit that is packaged in a mATX form factor system.

In addition, AMD has announced its contribution of the AMD Open CS 1.0 Common Slot design, based on the AMD Opteron A-Series processor, to the Open Compute Project. It is compliant with the Common Slot specification that "will enable multiple CPUs from multiple vendors of multiple generations to co-exist on the same board." First announced in June last year, the processors were codenamed “Seattle”. However, we did get wind of the AMD’s plans to develop 64-bit ARM-based Opteron server processors as early as October 2012.

The specifications of the AMD Opteron A1100 Series processors are as follows:-

The Opteron A-series development kit is made up of the following components:-