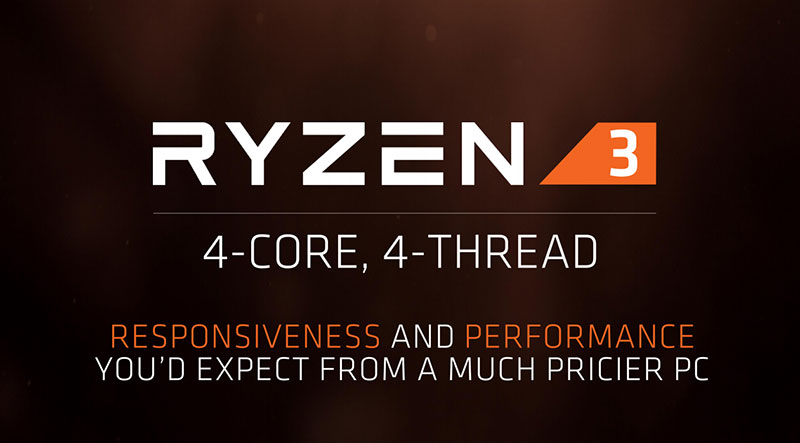 AMD has formally unveiled its Ryzen 3 processors, the final piece of its Ryzen product stack that already includes its Ryzen 5 and Ryzen 7 chips.

The company pressured Intel with the latter processors, which offered competitive multi-threaded performance for their price, and it’s continuing to do the same with Ryzen 3.

That’s quite a significant advantage in terms of core and thread counts, and Ryzen 3 offers a similar proposition.

AMD revealed more details about its Ryzen 3 chips when it announced the pricing for its upcoming Threadripper processors, so we already know that there will be two Ryzen 3 chips – the Ryzen 3 1200 and the higher-end Ryzen 3 1300X. Both processors are 4-core/4-thread parts that AMD says punch above their price bracket. Although both chips are priced even cheaper than Intel’s Core i3-7300 (4.0GHz, 4MB L3 cache) and Core i3-7100 (3.9GHz, 3MB L3 cache), they still offer four physical cores compared to the Core i3’s 2-core/4-thread design. That said, this does mean a higher 65W TDP, compared to the Core i3 chips' 51W.

Here’s a table summarizing their specifications:

AMD says the additional cores give it an advantage over the Core i3 chips in things like gaming, content creation, and video encoding, where the Ryzen 3 1300X is reportedly up to 13 percent quicker than the Core i3-7300 (4.0GHz, 4MB L3 cache) in Overwatch. Having said that, 1080p gaming performance has long been one of Ryzen's weaknesses, so it remains to be seen whether this will bear out in third-party tests. 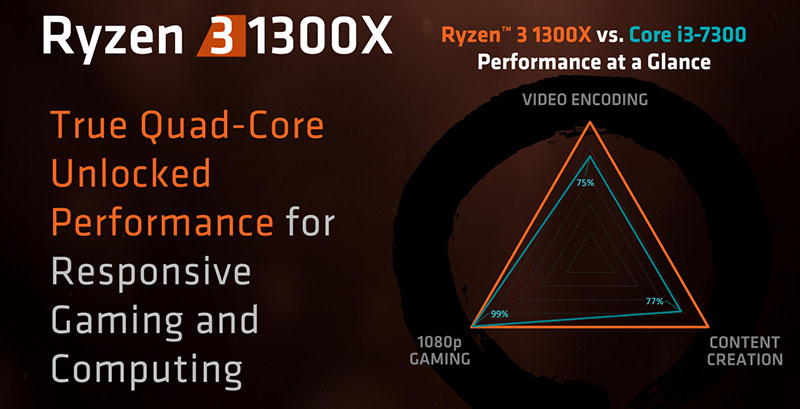 The launch of Ryzen 3 marks the completion of AMD's AM4 lineup, and the company pointed out that the AM4 platform was the first to cover the full spectrum of chips, ranging from its Bristol Ridge A-series APUs and Athlon processors at the low end to the enthusiast-grade 8-core/16-thread Ryzen 7 1800X. AMD has committed fully to AM4, and it intends to maintain the platform till at least 2020, which makes for quite a convenient upgrade path for system builders for the foreseeable future.

Finally, the Wraith MAX cooler with RGB lighting will also be available to buy as a standalone purchase for US$59. It will work with any AM4 motherboard with RGB controls, including ASUS' Aura Sync, Gigabyte's RGB Fusion, and MSI's Mystic Light. However, if your AM4 board doesn't sport the right lighting control software, you'll have to make do with the default red.