AMD has been slowly rolling back into the realm of HPC (High Performance Computing), thanks on no small part to the unveiling of their new HBM (High Bandwidth Memory) and upcoming Zen core CPU. With the advent of this new technology, rumors began to surface about the company’s endeavor in making a new monster of an APU, which would feature both their new Zen cores and Greenland GPU graphics. We even brought up the topic to Richard Huddy, Chief Gaming Scientist, AMD, back during the launch of the Fury X, but sadly, he was under strict orders to keep mum on it as well.

As of yesterday, those rumors were confirmed by AMD itself, when they finally revealed details of a new APU through a paper that had been submitted to the IEEE (Institute of Electrical and Electronics Engineer). 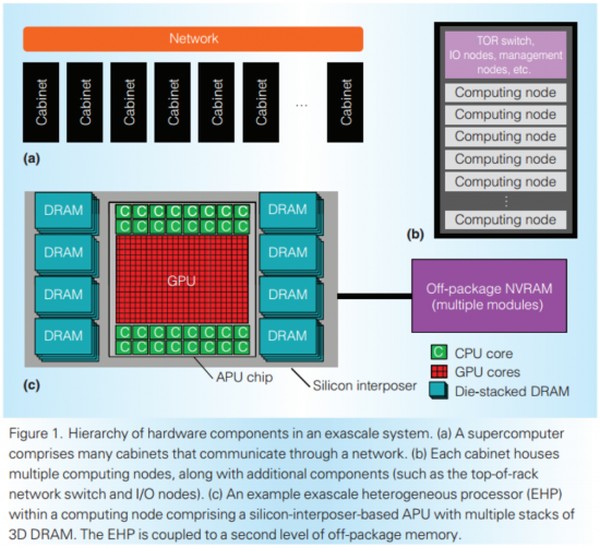 Thanks to the report published by WCCFTech, we now know that the new APU – dubbed as the Exascale Heterogeneous Processor, or EHP – is set to be a monster of a processor. It’s set to carry up to 32 Zen Cores, a massive Greenland GPU die, and up to 32GB of HBM2 memory, all on top of a 2.5D interposer.

Based off the image which was posted by WCCFTech as well, we can see that the new interposer design features eight stacks of the yet-to-be-seen HBM2. Each stack of HBM2 contains 4GB of memory, which is a total of 32GB of HBM2 memory onboard of the new interposer. As if that weren’t enough, AMD had mentioned that that memory can be further expanded by the new DDR4 RAM channel as well. It’s also got one of the biggest GPU die that AMD has ever made for an APU, covering more area on the interposer than the Zen cores do.

Now, before any of you enthusiasts and overclockers start getting all giddy with delight about this news, we think it’s important to note that this EHP APU was designed to be used in a HPC environment, so the chances of this new processor technology trickling down and becoming a consumer variant seems unlikely. That being said, we’ve still got AMD’s Zen CPU to look forward to when it makes its debut next year.