AMD has confirmed that a 64-core Threadripper processor is coming in 2020. The Threadripper 3990X is a 64-core/128-thread monster of a CPU, and it'll have an intimidating 280W TDP to go with it. However, the Threadripper 3960X and 3970X also have the same 280W, so it stands to reason that the 3990X will also drop into the same sTRX4 socket. The higher TDP across the board does help explain why AMD needed a completely new socket, since the new chips will undoubtedly require a more robust power delivery subsystem.

That said, it's a bit surprising that the TDP is actually the same for all the processors, given that the Threadripper 3990X has double the number of cores as the 3970X.

The new processor will also have eight chiplets, each of which has eight cores, and a total cache of 288MB.

That aside, AMD didn't reveal a lot about the upcoming chip. While we know that it will support PCIe 4.0, it's not clear whether it'll offer 64 PCIe lanes like the Threadripper 3960X and 3970X, or even 128 PCIe lanes like the server-oriented EPYC parts. 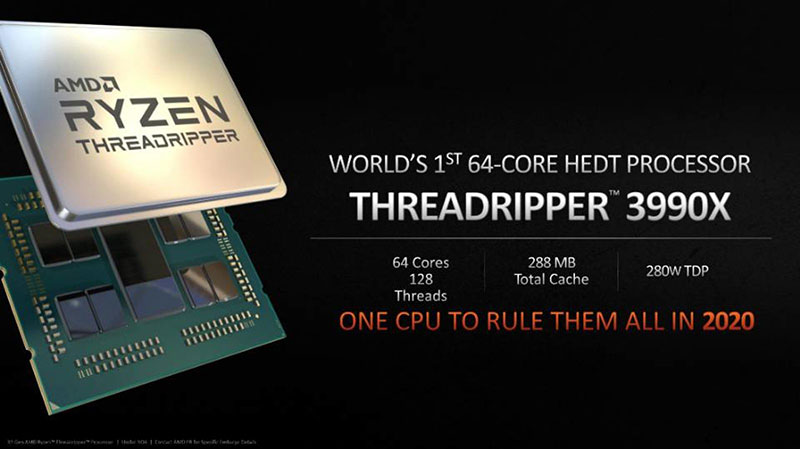 Furthermore, there was no mention of clock speeds, so it's possible that these could be lower, which might explain how AMD has kept to the same 280W TDP. However, since TDP is actually an indicator of how much heat a cooler should be able to handle instead of power consumption, you should still expect the 64-core chip to draw a lot more power.

If it isn't already obvious by now, these certainly aren't chips designed for gaming. AMD singles out "Hollywood creators" in its press release, and you can expect the Threadripper 3990X to be priced well out of the reach of the average consumer. After all, the 32-core Threadripper 3970X already costs US$1,999.

The Threadripper 3990X is basically the HEDT equivalent of the EPYC 7742, continuing AMD's efforts to make higher core count processors more accessible. Intel's Cascade Lake-X chips currently top out at the 18-core Core i9-10980XE, so AMD should look very appealing to professional content creators who need all the cores they can get.