Reports from both WCCFTech and Videocardz are saying that AMD’s Vega 10 GPU has already obtained certification by South Korea's National Radio Research Agency (RRA), meaning that the company’s ‘Radeon RX 490’ graphics cards is definitely already on its way, and that it’s only a matter of time until AMD makes the official announcement for it.

Any and all silicon-based electronics must receive the RRA's stamp of approval before it can even be considered a full-fledged consumer product. Simply put, it’s the final stage products like a GPU must undergo, and once the certification is received, no further changes can be made to the item. 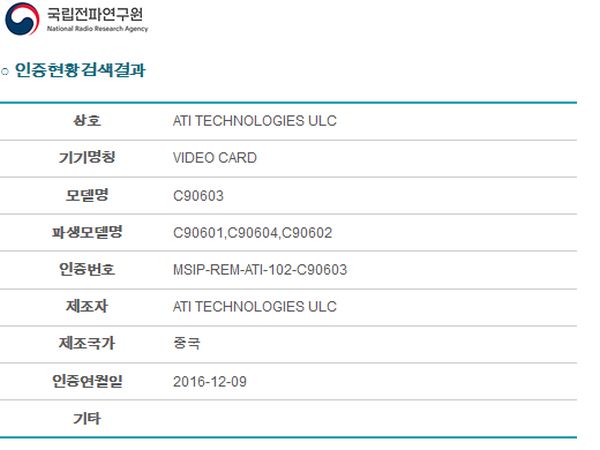 Coincidentally, the RRA Certifications also lists down a second Radeon GPU, which could possibly be AMD’s new Polaris 12 GPU. The appearance of this GPU would further confirm that AMD and its Radeon Technologies Group (RTG) is aiming for the enthusiast market with Vega 10, while the Polaris 12 GPU would be targeted towards the mainstream consumer market.

The Vega 10 GPU is set to be AMD's flagship GPU, and will reportedly sport a dual GPU build. Our earlier report suggests that the card would be powered by two Polaris 10 GPUs, but in light of this report, it now seems more likely that the card will be fitted with the new Vega 10 GPUs instead.

Previous Story
Tim Cook has said that Apple is committed to the Mac. This report suggests otherwise
Next Story
A look inside the Apple AirPods