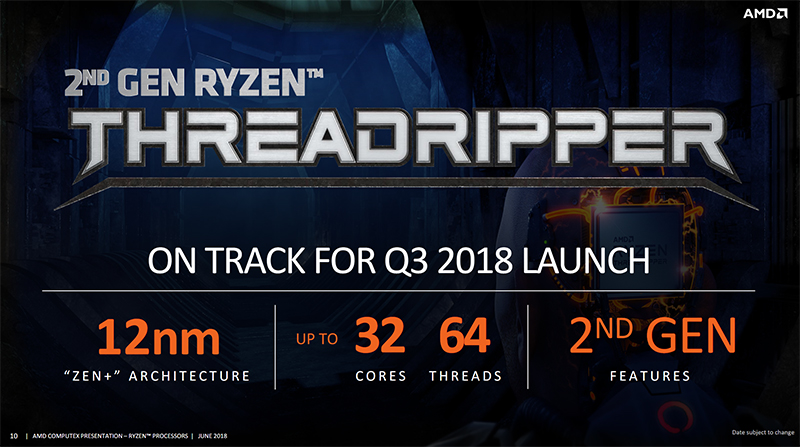 AMD has announced the second generation of Threadripper, and it has twice the number of cores as before. Threadripper 2 packs an impressive 32 cores and 64 threads, and uses the newer 12nm Zen+ core of the second-generation Ryzen processors.

The most fundamental element at the heart of each Threadripper chip is something AMD calls a Core Complex (CCX), which houses four cores, eight threads, and 8MB of L3 cache.

Each Zeppelin die holds two CCXes, and each first-generation Threadripper chip contained four CCXes for a total of 16 cores and 32 threads. Furthermore, the first Threadripper actually featured four pieces of silicon die – two active and two inactive – but Threadripper 2 will turn these inactive dies into active ones, thus increasing the core count.

The other CCXes without active memory controllers will have to route their memory requests through the other pair, which could translate into slightly higher memory latency.

Furthermore, while EPYC has 128 PCIe lanes, Threadripper 2 will have the same 64 as its predecessor because the newly active chips aren’t actually contributing any additional lanes.

The newer 12nm manufacturing process also enables reduced power consumption compared to 14nm, but doubling the number of active dies ultimately results in a higher power envelope. The thermal design power of Threadripper 2 now sits at 250W, compared to 180W from before.

The higher power requirement means that certain X399 boards may not be able to cope, so AMD may launch a range of new boards with more robust power delivery circuits.

That said, AMD hasn’t finalized certain specifications such as clock speeds. The company currently has two chip samples – a 32-core/64-thread part and a 24-core/48-thread chip. At the time of writing, they both have a base frequency of 3.0GHz and a turbo clock of 3.4GHz, the latter of which may change in the final release.

Previous Story
BlackBerry Key2 is official; joins the dual-camera module party with new keyboard
Next Story
You may soon be able to post videos of more than one minute on Instagram