For those of you who have been anticipating AMD’s new Ryzen Mobile processor, the wait is now (sort of) over. 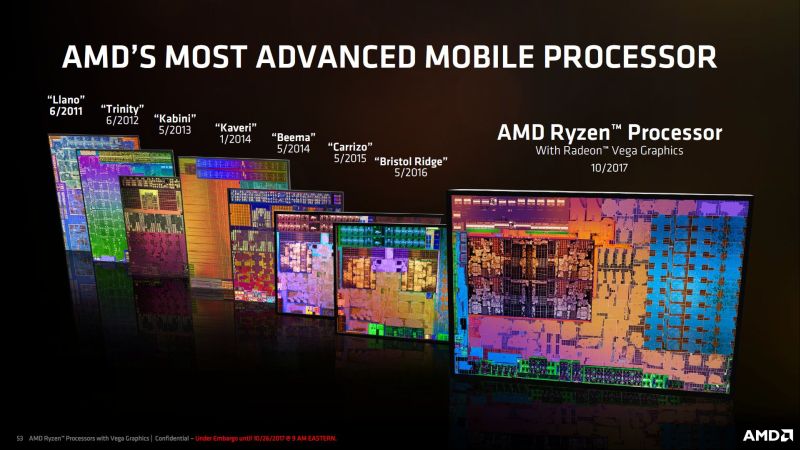 Previously codenamed ‘Raven Ridge’, the company officially announced its new Ryzen Mobile APU last night, much to our surprise. The Ryzen mobile chips use AMD’s Infinity Fabric interconnect to link both Zen and Vega on a single piece of silicon, and it says this method offers higher bandwidth and lower latency than the PCIe interface. Simply put, the Ryzen Mobile APUs signifies AMD’s entry into the world of ultrathin notebooks, and serves as the company’s response to Intel, who has dominated the Ultrabook market segment for many years.

But that aside, you obviously want more details on what is being offered. AMD will be releasing two SKUs: the Ryzen 7 2700U, and the Ryzen 5 2500U. Both APUs will a 4-cores, 8-threads layout, based on the current 14nm die lithography that is used on both the Ryzen and Vega architectures, respectively. Performance-wise, AMD states that these APUs will have three times better CPU performance and more than twice the GPU performance than all of its previous AMD mobile processors. And thanks to its 15W nominal TDP, AMD also a 58 percent power consumption reduction in comparison to older APUs. 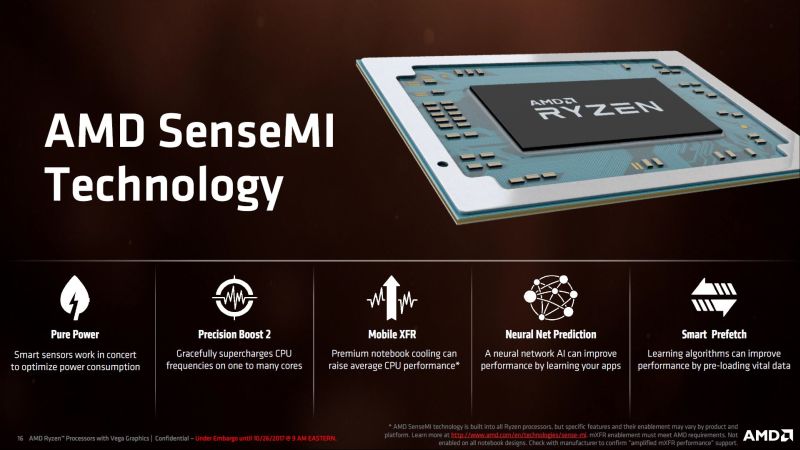 Even more impressive is that both Ryzen Mobile APUs have access to the same SenseMI CPU technology. Key features in SenseMI include access to: On the subject of GPU performance, AMD says that the 2700U and 2500U are capable of delivering smooth and playable framerates at Full HD resolution in titles titles such as League of Legends (LoL), Overwatch, CS:GO, and even DOTA 2. For media entertainment, Ryzen Mobile will also be capable of streaming both Full HD and 4K resolution videos.

Excited to try your hands out on a Ryzen Mobile-powered notebook? Well, the good news is that you may not have to wait long. As it stands, AMD is already working with manufacturing partners Acer, HP, and Lenovo, to have their own respective notebooks ready and available before the year’s out.

These notebooks will include a variation of HP’s Envy X360, Acer’s Swift 3, and Lenovo’s Ideapad 720S, respectively. For more from AMD, you can follow us here.