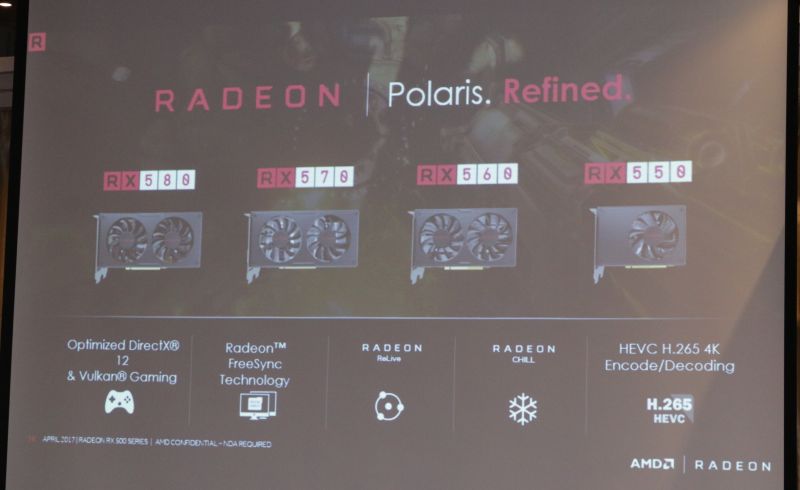 The news was first announced to us back during AMD’s official APJ summit in Malaysia, and as you would have no doubt judged from the slides, the new cards are expected to serve as filler for the company’s GPU division, at least until the arrival of its enthusiast-level Radeon RX Vega.

The new Radeon RX 500 GPUs are all fitted with a new and improved Polaris GPU, the company’s mid-range GPU architecture that made its debut last year with the launch of the Radeon RX 400 series GPUs. 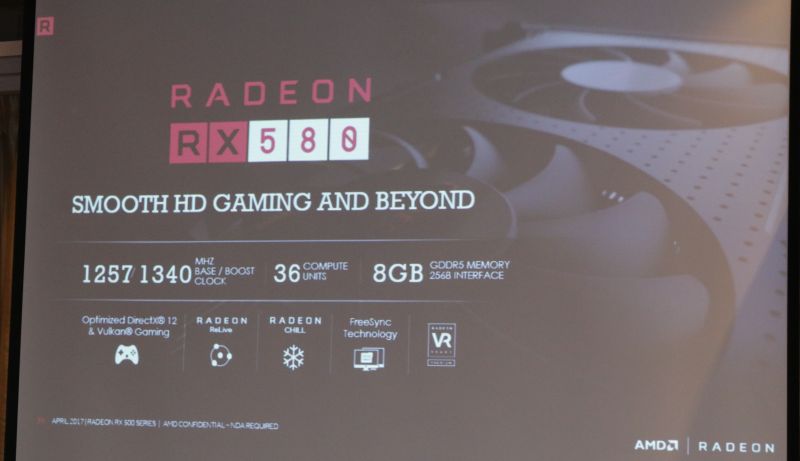 The RX 580 is, obviously, the flagship card of AMD’s refreshed mid-range GPU segment. Thanks to the use of a new and better manufacturing process, the RX 580 has a higher base and boost clockspeed of 1,257MHz and 1,340MHz, respectively. Like the RX 480, it will be available in either a 4GB or 8GB GDDR5 variant. Again, like the original RX 480, the RX 580 is a card that is designed for 1,440p gaming, and not 4K (that will be Vega). 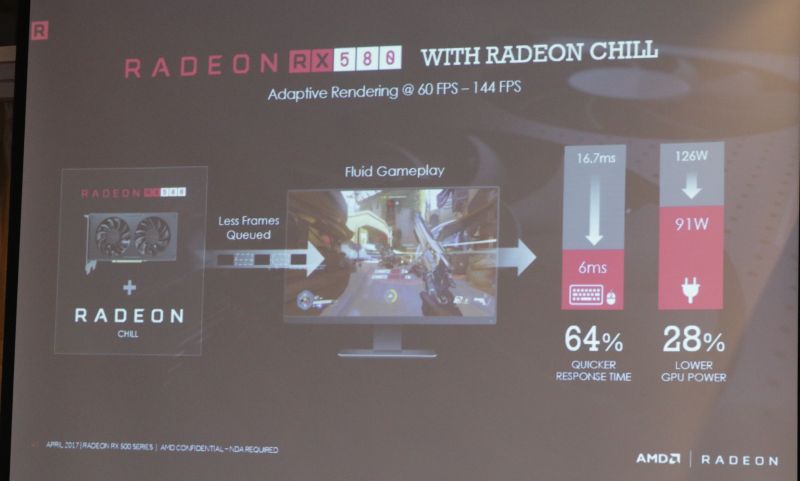 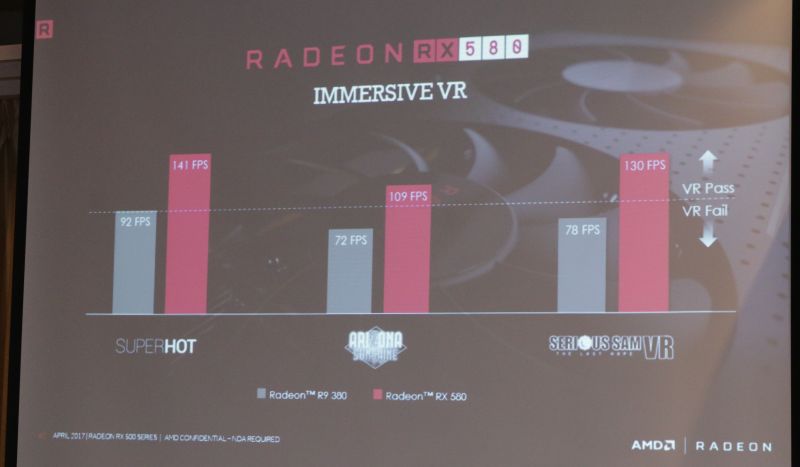 The one that AMD spoke broadly about during the APJ summit was the 8GB variant of the card, and even stated that the card would have performance boost over NVIDIA’s own GeForce GTX 1060 of 1.3 times. Additionally, AMD also ensured us that the RX 580 has also been improved for a better and more immersive VR experience. 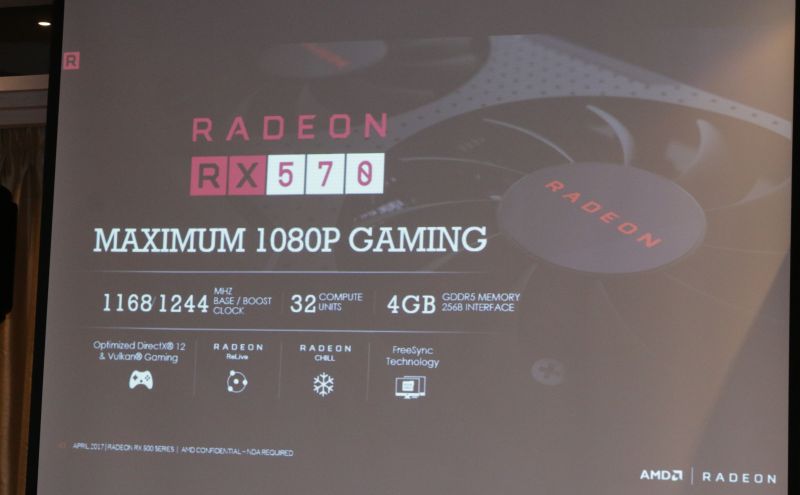 Next on the list is the RX 570. Like its predecessor, the RX 470, the card will have up to 8GB of GDDR5 graphics memory, and will have a base and boost clockspeed of 1,168MHz and 1,244MHz, respectively. In comparison, the card is catered to gamers that are looking for maximum graphics performance but still adhering to the standard Full HD resolution. By comparison, AMD is pitting the RX 570 directly against NVIDIA’s budget-friendly GeForce GTX 1050 Ti graphics card, with a performance improvement of 1.8 times over its competition. 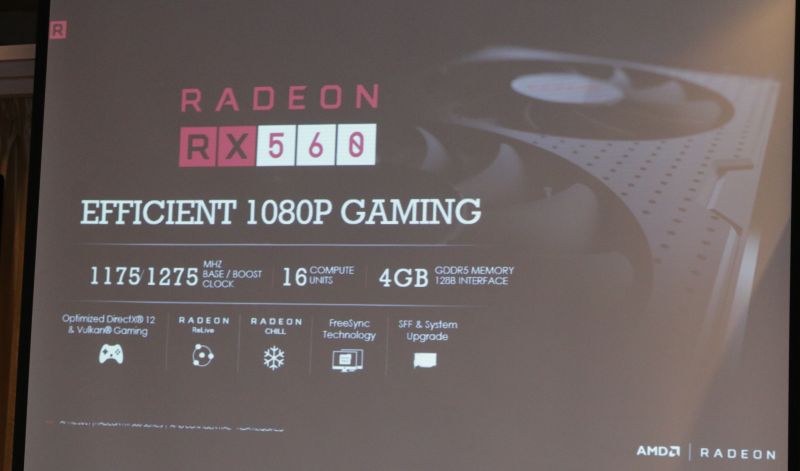 Moving forward, the RX 560 replaces the original entry-level Radeon RX 460 with its new and improved Polaris GPU. Featuring up to 4GB of GDDR5 memory and a base and boost clockspeed of 1,175MHz and 1,275MHz respectively, the RX 560 is catered to the gamer who aren’t looking to break the bank, but would still like to enjoy their favorite MOBA or triple A title at acceptable frame rates. 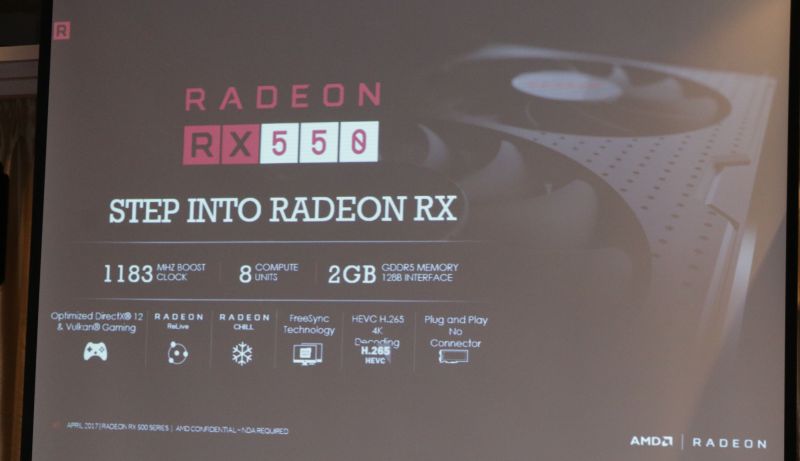 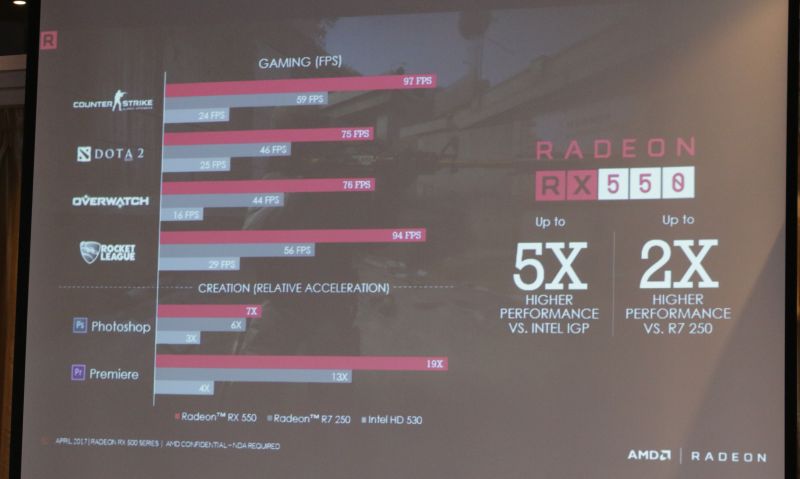 Last but not least is the RX 550, AMD’s latest entry-level graphics card to be added into its Radeon GPU lineup. With 2GB of GDDR5 clocked at a frequency of 1,183MHz, this card is essentially a simple and no-fuss graphics card that anyone who needs a GPU can easily just purchase and slot it into the machine without the need of a PCIe power connector (much like NVIDIA’s own GeForce GTX 1050 and GTX 1050Ti).

A common feature that the new Radeon RX 500 series GPUs share is that they will all be utilizing a refreshed reference cooling system. With the exception of the RX 550, all the cards seem to feature a double fan cooler configuration. 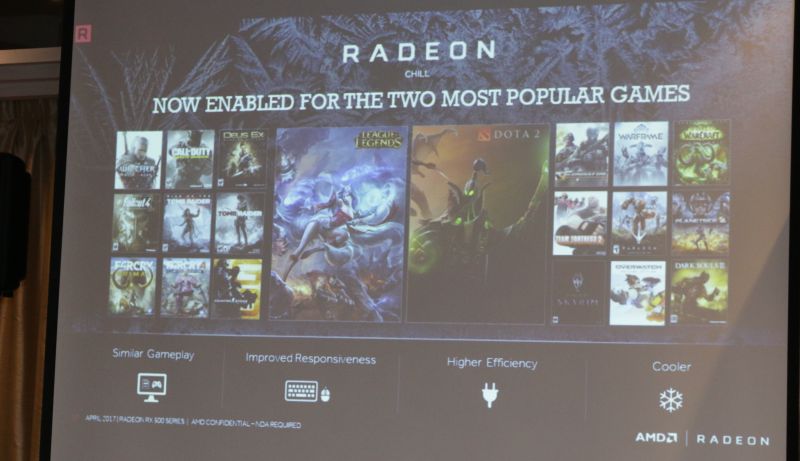 AMD’s Radeon Chill feature is also present across the board with all cards, meaning that all the cards will also be able to hit peak performance at lower temperature than the previous generation RX 400 series.

The Radeon RX 500 series graphics cards will be available starting today, with custom-cooled versions of each card to follow shortly.