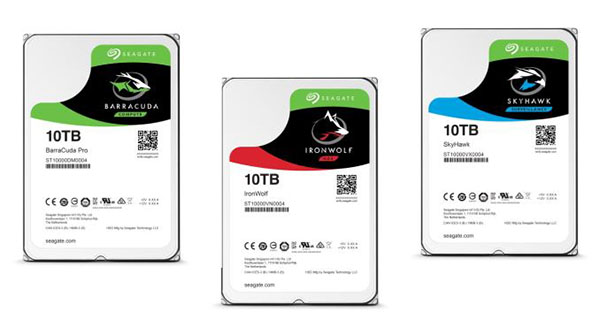 Seagate is launching three new models today, and although all three are offered with 10TB of capacity, are helium-based and run at 7,200RPM, they have been designed differently for use in different scenarios. For example, the BarraCuda Pro was designed for high performance general computing and comes with a 5-year long warranty. On the other hand, the IronWolf has been optimized for use in NAS systems and arrays, and has an incredible rated endurance of 180TB writes per year. Finally, the SkyHawk has been designed with endurance in mind as it is meant to be use in video surveillance systems. Like the IronWolf, the SkyHawk drives have a rated endurance of 180TB writes per year. SkyHawk drives even come with data recover options.

The BarraCuda Pro and IronWolf are now shipping worldwide, while the SkyHawk is presently being sampled by select customers with wide-scale availability to be confirmed shortly.