In recent years, Xiaomi phones have always been the top choice for those with a budget to adhere to. While Huawei has overtaken them as the top phone brand in China last year, this doesn't mean that Xiaomi is going to raise the white flag anytime soon. This year, they're putting up a strong fight with a host of new devices, including the Mi 5, but the device to arrive on our shores is the Redmi Note 3.

Those familiar with Xiaomi's lineup will know that the Redmi Note line of devices consists of budget-friendly phablets. The Redmi Note 3 is no different – it's a 5.5-inch phone with Full HD resolution, a 64-bit Qualcomm Snapdragon 650, an Adreno 510 GPU, a 16MP rear camera with phase detection, and a 5MP front camera. Most impressively though, this device comes with a fingerprint sensor and a humongous 4,050mAh non-removable battery that supports quick charging.

Malaysians will be getting two variants – differing only in the amount of RAM and internal storage. One variant will come with 2GB of RAM and 16GB of storage, while the other (reviewed here) will have 3GB RAM and 32GB of storage. Regardless of which variant you go for, there's a microSD slot for you to add more storage.

There's no denying that the Redmi Note 3 takes its design cues from a phone made by a company based in Cupertino. Regardless, it's sleek and rather beautiful. It has chamfered edges, and the edges at the rear are curved, so it fits nicely in your hand. Having said that, at 5.5-inches, those with smaller hands may find this phone to be slightly unwieldly.

You'll find the power and volume rocker the right side of this device, while on the left, you'll find the SIM/microSD tray. You'll need to use a pin to gain access to the tray, which supports Micro-SIM cards, by the way. Up top, you'll find a 3.5mm audio jack, as well as an infrared transmitter (more on this later).

At the rear, there's the 16MP rear camera, which does not protrude, as well as the dual-tone LED flash and fingerprint sensor. The fingerprint sensor is slightly flushed, so you won't need to feel your way around when attempting to unlock the phone. The speakers are also found at the rear, which we found to be mildly annoying, because they get completely covered when placed on a table – you have to prop it up against something if you want to watch a video with friends, or keep holding it in your hand.

One of the things that's exciting about the Redmi Note 3, is the fact that this phone comes with the MIUI 7 firmware. The interface itself is smooth, and many of the features found in previous MIUIs make a return, like the private messages tab, for example. Unfortunately, one of the more interesting features on MIUI 7, Showtime, is currently unavailable in Malaysia. Xiaomi did say that this feature will be rolled out globally though, hopefully sometime soon. What's also cool about the Redmi Note 3 is that it has an infrared sensor that, along with the Mi Remote app, allows it to function like a universal remote controller. The list of devices it supports is pretty extensive, but unfortunately, there's no way to add additional controllers to it, so what you see, is what it supports. 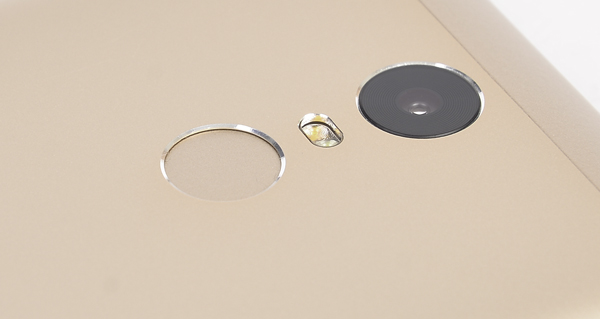 As mentioned, this phone also has a fingerprint sensor. This sensor is recessed and round, but unlike the fingerprint sensor of the Huawei Mate 8 or Mate S, which allows you to not only unlock the phone, but navigate the UI, and interact with the phone in other ways, the sensor on the Redmi Note 3 can only be used to scan your prints and activate the shutter button while the front camera is active for both the front and rear camera, for easier selfies. Known as the Fingerprint Selfie feature, it is still in beta, which means it's unavailable to us at the moment. However, support for this feature will be rolled out sometime soon. While on the subject, the scanner recognized a registered fingerprint nine out of 10 times during our time with the device, and on average, the phone does unlock in about 0.3 seconds.