Now we get to the part that sort of made Xiaomi as famous as it is right now. To test the Xiaomi Mi Pad, we ran the following benchmark apps:

You will notice that Quadrant is missing from our usual list of benchmarks. This is because the Mi Pad that was in our care had an peculiar quirk of not allowing benchmarking apps to send data back to their servers. As Quadrant requires the data to be sent back before even giving us the scores, we weren't able to get them. As for AnTuTu, we managed to get the scores, but because the Mi Pad did not allow the scores to be sent back for verification, they remain unverified. That makes us quite suspicious of the Mi Pad's actual performance, as Samsung once did.

Also worth noting is the option to turn on Performance Mode. the Mi Pad prompts you to do so when it detects any benchmark apps running, but we didn't really get any significant performance increase after switching. 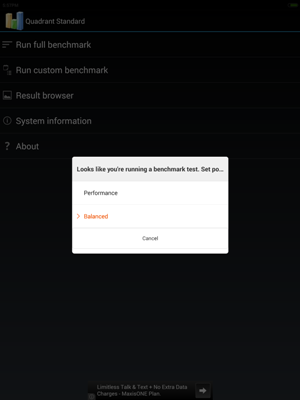 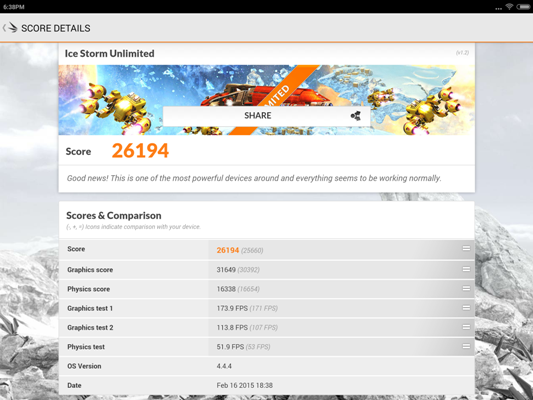 With 3DMark's Ice Storm Unlimited benchmark, the Xiaomi Mi Pad managed a score of 26,194. This is impressive, considering it is powered by a 32-bit NVIDIA Tegra K1 processor; the Google Nexus 9, with its 64-bit NVIDIA Tegra K1, scored lower, with 24,444. 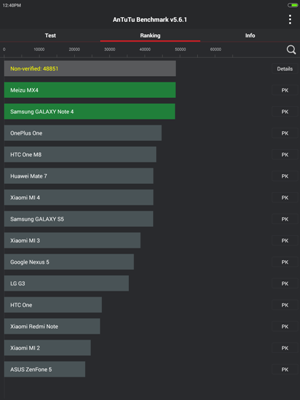 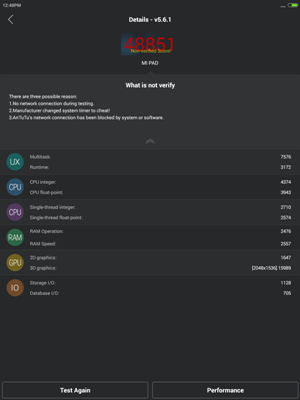 For the AnTuTu benchmark, the Xiaomi Mi Pad sits among the top devices, with a score of 48,851. This was a score that inched ahead of the Meizu MX4, but was a considerable margin behind the Nexus 9. However, from the screenshots we've taken, you can see why we were so suspicious of it, despite it not having the kind of performance the Nexus 9 had. 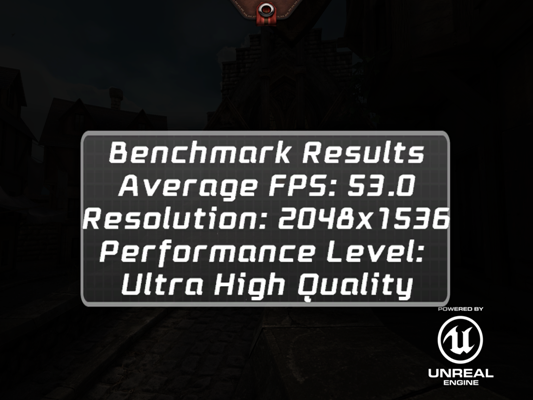 Powered by an NVIDIA Tegra K1, we expected great results on this benchmark, even if it is just the 32-bit version of it. While maintaining an average frame rate of 53 FPS isn't too bad, especially at a resolution of 2,048 x 1,536 and at Ultra High Quality, we expected it to be able to maintain an average of over 55 FPS. 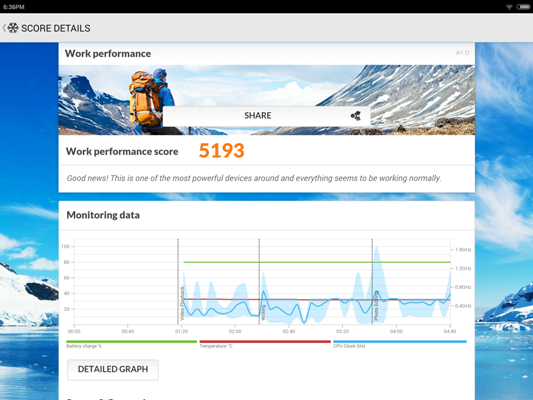 As PCMark provides the work benchmark, we decided to use it to see how well the Xiaomi Mi Pad performs as a working tool. The score it obtained was a solid 5,139. 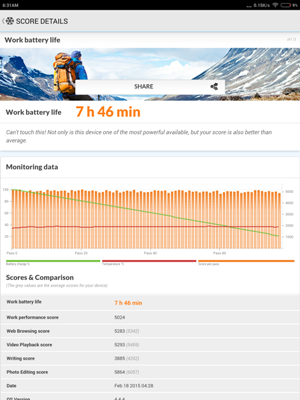 Continuing with battery life, we used the test included in PCMark to see how long it can keep working before it went out of juice. It lasted shy of a full day at work, at seven hours and 46 minutes. That's almost eight continuous hours of work, which was within our estimates considering its 6,700mAh battery. 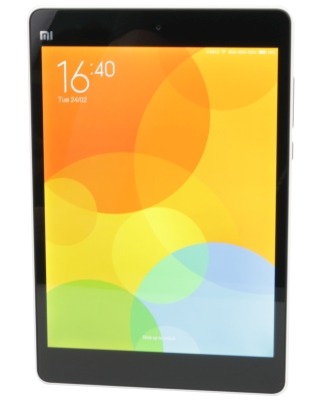 There have been many devices that have come in and out of our hands, but few have made us feel as divided as the Xiaomi Mi Pad has.

On one hand, it is extremely cheap and powerful without regard for each other. It lasts longer that its user would too, in a working marathon. The speakers are loud, albeit poorly positioned. The camera is nice under favorable lighting conditions. The overall 8-inch form factor is really great to handle, and is also comfortable for reading and video watching purposes.

On the other hand, it looks exactly like how it's priced. Its need for a pin to access the expendable storage and its really odd necessity for a factory reset every time you need to change locations are really tiresome, and the factory-reset-to-change-locations thing is also quite suspicious, but not as much as the device's refusal to send testing data to the respective benchmarking servers.

If none of the cons bother you (or if you think those are the ramblings of a hypochondriac), then we have no problems recommending the Xiaomi Mi Pad. It is powerful, its battery is long lasting, and having all that for RM799 is extremely good value for money.

Write a Review
Compare This | Specifications
Very good value for money
NVIDIA Tegra K1 is really powerful
MIUI is fun to use, albeit with some learning curves
Build quality reflects the price
Speakers are poorly placed
Access to microSD card slot is troublesome