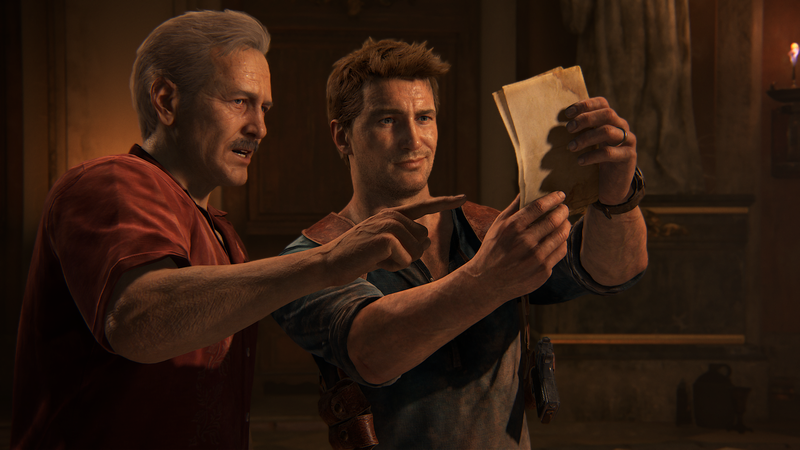 It has been over five years since we’ve last seen the treasure hunter extraordinaire, Nathan Drake, but fans will be pleased to know that the wait has not been in vain. Taking a leaf out of the successes of previous installments, as well as the new tricks that they’ve learned with The Last of Us, Naughty Dog has delivered yet another smashing blockbuster with Uncharted 4: A Thief’s End that brings back the excitement of treasure seeking, as well as the adrenaline rush from over-the-top action sequences that will leave players at the edge of their seat.

Set well after the events of Drake’s Deception, Uncharted 4 introduces us to Nate’s older brother, Sam, who was presumably dead until he comes knocking with a fresh new adventure, and a plea for help to save his life. Together, the brothers embark on a globe-trotting quest in pursuit of the long-lost treasure of the pirate king, Captain Henry Avery, traversing snowy highlands, bustling marketplaces, jungle islands and, of course, a staple of the series: ancient cities. A masterpiece that captures the spirit of adventure

There is no denying that the visuals of Uncharted 4 stand out amongst its peers; showcasing the PS4 as a veritable graphical powerhouse. Right from the get-go, it’s hard not to get lost in the immersion with realistic animations and breathtaking set pieces that make you feel as if you’re part of a movie rather than a video game. From lush mountainous regions to sprawling European cities overlooking the sea, from hand-to-hand combat sequences to car chases across a Madagascan Redland, every scene of Uncharted 4 has been carefully thought out and planned to deliver in incredible scale.

And the scale is magnanimous, from the complex puzzles you need to solve to the nail-biting literal cliffhangers that will have you tapping away fiercely at the DualShock 4 wireless controller, as if your life (or Nate’s rather) depended on it. Without giving too much away, fans will be pleased to find that Uncharted 4 has spared no expense in bringing back some truly Indiana Jones-esque sequences, including booby-trapped caverns, crumbling ruins, and a manner of all possible catastrophes that can happen while seeking one pirate’s fortune.

One such scenario involved scaling a grand clock tower to solve a perfectly simple puzzle fans may recall similar in Drake’s Fortune, while another was an escape from a beastly combat car that seemed almost unstoppable. Both inevitably culminated in a fustercluck of explosions and jaw-dropping near-death situations that it’s a wonder how Nate and his partners are still alive in the aftermath. Nonetheless, it’s these amazing sequences that players will enjoy and continue to look forward to, even though it can be pretty repetitive after the 20th time. While Uncharted 4 can be linear at (most) times, the joy of the game lies in its exploration with many treasures to find, as well as nooks and crannies to explore. The addition of some new gameplay mechanics, such as a new grappling hook and later, a piton, facilitates these discoveries, and is also a welcome addition for Nate to navigate the beautifully crafted levels that are both smart and challenging.

Other additions, while seemingly small, also help make the game more accessible to new players: ammo now lights up for easy identification on the battlefield, while maneuvering Nate is also more refined, thanks to revised combat mechanics that enable us to swap between melee and ranged attacks at ease. This results in seamless animations that are less jarring, making battles much more fun to play and realistic to watch.

As Uncharted 4 continues in its ascent towards the massive pay-off, however, players will start to weary of the puzzle-run-gun formula that each individual chapter offers (over 20 in all). The all-too-familiar breaking bridges, collapsing cliffs, and disintegrating platforms become tedious, as players shimmy, climb, swing and dodge roll their way through each and every new level, while the support characters are always ready to point out that the treasure is in another castle. The adventures of Nathan Drake and co.

Nonetheless, the accompaniment of support characters – Sam, as well as good ol’ mentor Sully and reporter Elena – helps break the monotony, packing some backstory in their dialogs with each other. Jumping from rock to rock isn’t so boring when you have Sam and Sully bantering in the background, filling you in on the details about the main plot, but more than that – are a joy to have in your journey, providing some comedic relief.

They do, however, serve some purpose, particularly during stealth sequences, when they helpfully whisper about enemies around the corner, letting you know if there’s a baddie nearby and if he’s carrying some serious firepower. Occasionally, when you’re stuck, the support characters even provide clues of what to try next, which is a shame because they then stand around waiting for you to solve the puzzle. It’s almost as if they’re saying: “I think you can do this. Now, go fetch.” We know it’s a game, but you can’t help but feel as if you’re doing all the work on your own. The fact that they can’t be spotted by enemies also adds for some hilarity, especially when you’re thick in the tall grass and your partner is running around freely in full view of the enemy.

As always, strong characterization has always been a plus point for the Uncharted series, and the latest installment doesn’t fall flat, delivering a theatrical piece that is sharp on the script and deep in the drama. The camaraderie is strong with the main three, and players will be able to feel the warmth of their tones and nuances, perfectly conveyed in the motions and voices of the actors. Even the new additions impress; from the elder brother Samuel Drake, who seems almost too suspicious to be trustworthy, to the hard-hitting mercenary Nadine Rossi and her counterpart Rafe Adler with the silver spoon in his mouth, Uncharted 4 succeeds in bringing the best out of every character.

This helps as the story unfolds, taking players down the road through time jumps in the narrative to shed light on the brothers’ lineage and their history as orphans, followed by some intense, dramatic scenes in the present that keep players on edge. The result is a cohesive piece of storytelling that keeps players wanting more with every passing chapter.

Finish the single player storyline, however, and Uncharted 4 still holds plenty of replayability in multiplayer, where players will be able to put their treasure hunting, gun-toting, rope-slinging skills to the test in eight maps (at launch) based on key levels in the game. Vastly improved from the multiplayer of yesteryear, Uncharted 4 offers up a completely new experience that allows players to take on a variety of common multiplayer game modes, such as Team Deathmatch, Ranked Team Deathmatch, Command, and Plunder. Multiplayer also offers various challenges to complete daily, so there is always something to look forward to online every day.

Players can take on the role of either heroes or villains from across the series, such as Marlowe, Chloe, Lazarevic, or Salim just to name a few, which they can then trick out with a variety of customizable options – adding on cowboy hats or sunnies – so no two characters look the same on the battlefield. Using relics earned from completing daily challenges, completing trials and winning matches, players will be able to unlock a bevy of skins, outfits and other enhancements for their character. Alternatively, those who prefer it easy can even opt to buy Uncharted Points in place of relics to get their item of choice, simplifying the play, collect, and spend process. The most notable changes to the multiplayer experience, however, come from the opportunities you take and the decisions you make on the battlefield. With the additions of new gameplay mechanics, such as the inclusion of an in-match store, Mysticals, and sidekicks, multiplayer is a whole new ballgame, which will require some strategy and quick thinking – all at 60 frames per second.

Mysticals, for instance, enable players to quickly turn the tide of battle using artifacts from the other installments in the Uncharted franchise, including El Dorado, the Cintamani Stone, and Indra’s Eternity among some, which grants a host of different benefits including teleportation, health recovery, slow motion, and more. The addition of sidekicks also enables players to call for backup in the heat of the battle, using cash earned from collecting loot and downing enemies in the match. There are over four different types of sidekicks to choose from, so gamers will be able to quickly summon for help when they need it, driving a quicker path to victory. All in all, Uncharted 4: A Thief’s End is a solid new addition to the Nathan Drake chronicles, and a perfect comeback for the series on the PlayStation 4. With new innovative gameplay mechanics, superb graphical investments, and masterful storytelling – Naughty Dog has outdone themselves once again, crafting a blockbuster cinematic experience that gives both Indiana Jones and Lara Croft a run for their money. Newcomers to the franchise will be able to pick this up and play it without missing a beat, while fans will appreciate all the little details that harken back to Nate’s earlier adventures. But more importantly, followers of the Nathan Drake story will finally get the closure and ending they deserve.