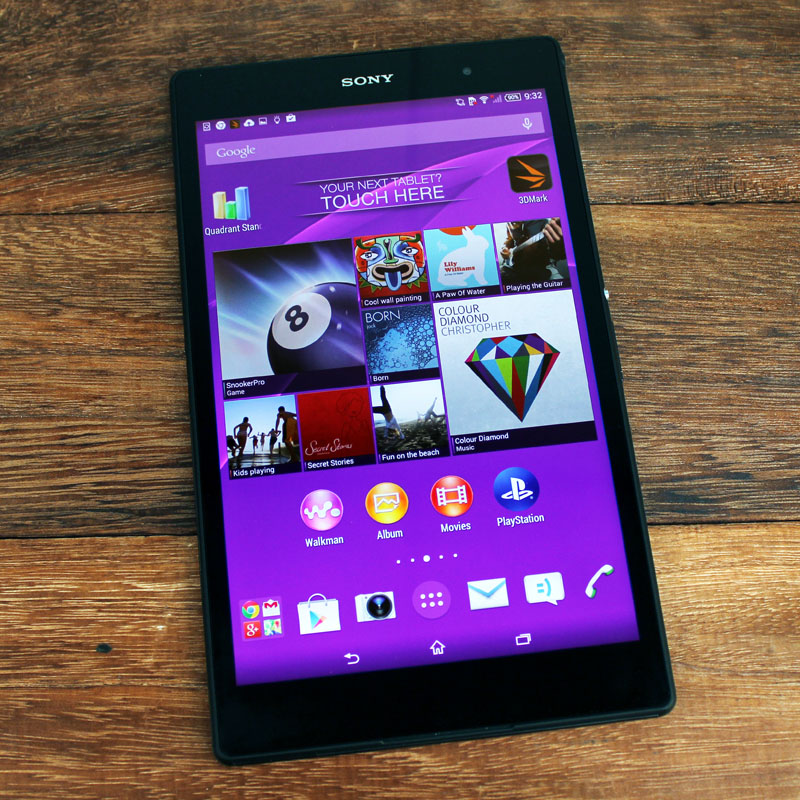 Sony has three products in its Xperia Z3 range, two phones: the 5.2-inch Z3 and the 4.6-inch Z3 Compact, and one tablet, the 8-inch Z3 Tablet Compact. While Sony's earlier tablets were all 10-inch affairs, the new Z3 Tablet Compact is the company's first foray into the 8-inch category, putting it in the same bracket as the Apple iPad mini 3, LG G Pad 8.3, and Samsung GALAXY Tab S 8.4.

Like older Xperia Z tablets, the Z3 Tablet Compact has a razer-thin design and is completely dust and waterproof, thanks to an IP 65/68 rating. It is powered by a Qualcomm Snapdragon 801 2.5GHz quad-core processor with 3GB RAM, and runs on Android 4.4.4 KitKat.

To set it apart from other Android tablets, it also has the unique ability to act as a remote display for your Sony PlayStation 4 console. Your console still does all the leg work, but it streams the feed directly to your tablet via Wi-Fi, letting you continue your game while your TV is off (of if you want to play games while you're in the toilet).

Before we start, here's a closer look at the Z3 Tablet Compact's specs:-

Sony has clearly found a look it likes and it's sticking to it, as the 'OmniBalance' design of the Xperia Z range has remained mostly unchanged since its inception. Fortunately, it's a pretty good look, and the Z3 Tablet Compact looks sleek and smart with its minimalist, rectangular slab design and rounded corners. 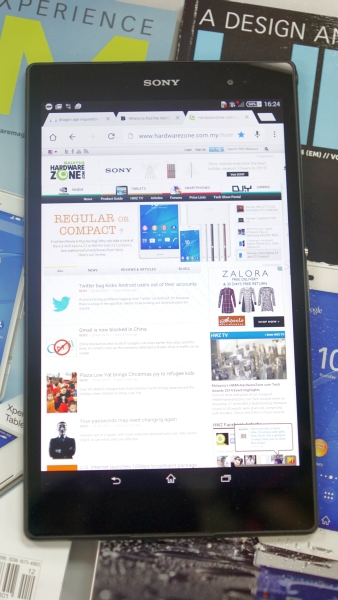 At just 6.4mm, the Z3 Tablet Compact is remarkably skinny - in fact, it's more than 1mm thinner than the iPad mini 3, and 0.2mm thinner than the Samsung GALAXY Tab S 8.4. While its slender size does make it look and feel very premium, it does feel slightly fragile, and you definitely don't want to accidentally sit on it.

The tablet is light too, and can easily be held one-handed for an extended period of time, as it weighs just 270g, making it 61g lighter than the iPad mini 3 and 28g lighter than the GALAXY Tab S 8.4. Sony has been able to keep the weight down by reducing the amount of metal in the build - unlike the Z3 smartphones, only the corners of the frame have metal edges,  with the rest of the frame constructed out of a metallic-painted plastic material. The Z3 Tablet Compact also loses the glass rear of its smaller smartphone siblings, in favor of a matte, textured plastic back. 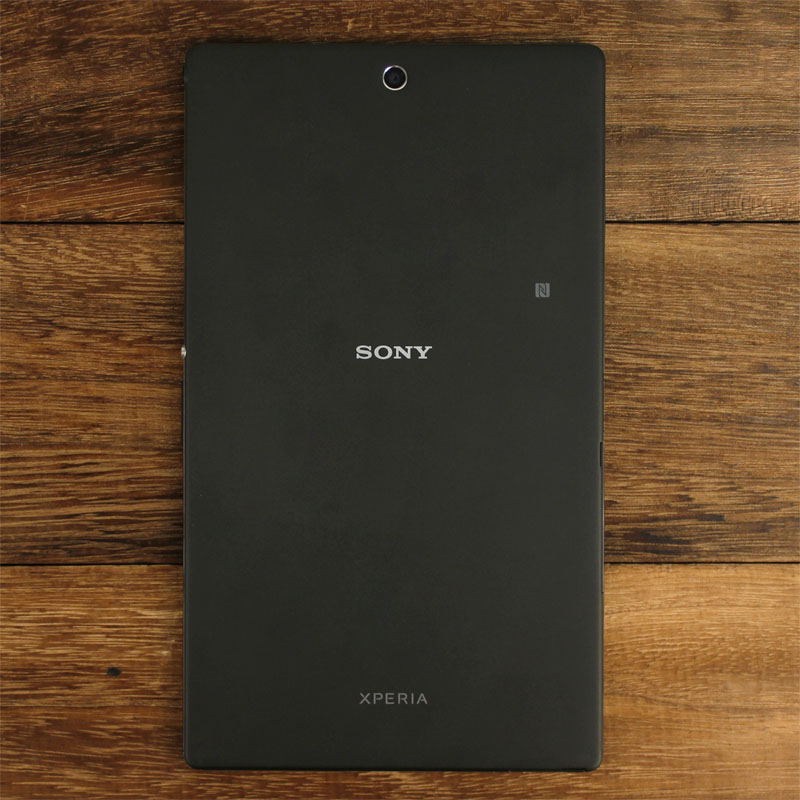 Like all of Sony's Xperia Z range, the Z3 Tablet Compact is completely dust and waterproof, and is rated IP65/68. That means you can safely use it at the pool - or even in the pool if you really want.

At the right side of the tablet, you'll find Sony's signature round silver power button, with the volume rocker located beneath it, and the headphone jack in the top right-hand corner.

The micro-USB port is hidden beneath a waterproof flap at the bottom edge, and a microSD card slot and micro-SIM card tray are hidden under a flap at the lower left edge. Both of these panels must be carefully re-sealed after use to ensure the device maintains its waterproofing. If you're worried about water getting in after repeatedly opening and closing the micro-USB flap, you can buy the optional DK39 charging dock, which charges the tablet via two pins on the left-hand side. Incidentally, the charging dock is compatible with Sony's 10-inch Z2 tablet, so you can share it if you have both devices.

The Z3 Tablet Compact's 8-inch display has a 16:10 aspect ratio (the same as the Tab S 8.4), making it quite a bit longer than it is wide. By comparison, the iPad mini has a 4:3 ratio, which makes it a bit more boxy. The 16:10 ratio makes the Z3 perfect for watching movies in landscape orientation, but content can look slightly stretched in portrait mode.

The display itself has a Full HD 1,920 x 1,200 pixels resolution, which gives it 283ppi, lower than both the iPad mini 3's Retina display (326ppi) and Samsung's GALAXY Tab S 8.4 (359ppi). Actually there are even smartphones that outclass it - LG's 5.5-inch G3 has a 2,560 x 1,440 pixel resolution (534ppi). Nevertheless, while disappointing on paper, in reality the Z3 Tablet Compact's screen is very crisp and sharp for its size, and honestly it's hard to tell the difference between it and the iPad mini 3's Retina display. 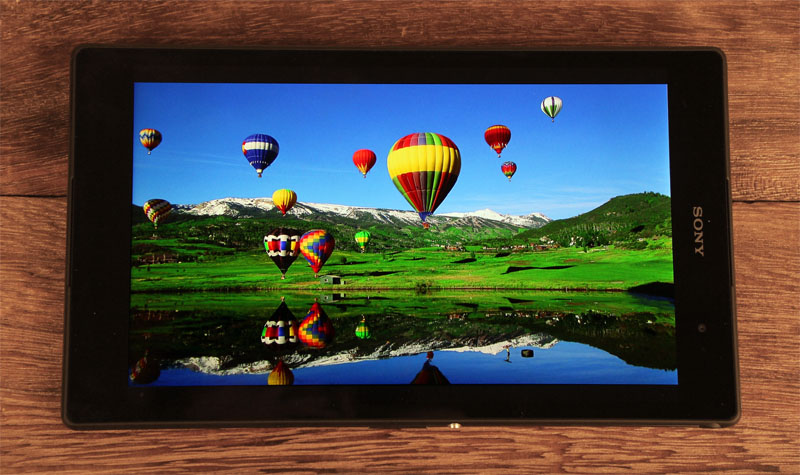 According to Sony, the glass screen is shatter-proof (although Sony is notably one of the few manufacturers who does not use Corning Gorilla Glass on its products) and comes equipped with an oleophobic coating to prevent unsightly fingerprints. While we weren't able to test the authenticity of Sony's shatter-proof claim, the latter claim is, to put it mildly, a big fat lie. The Z3 Tablet Compact's display is one of the worst fingerprint magnets we've ever laid our hands on (literally) and needs frequent wiping down. It's also quite reflective and, while its high brightness does mean that you can use it under direct sunlight, you'll often catch annoying reflections when you're trying to watch a movie with dark scenes in it.

Like the Z3 phones, the Z3 Tablet Compact boasts front-facing stereo speakers, located at the top and bottom of the tablet (left and right when held in landscape orientation). Sound quality is decent, and definitely better than most other tablets, with plenty of volume and even some mildly impressive bass. It's more than good enough for YouTube videos and personal movie watching but, of course, you'll still get more satisfaction out of plugging in a decent pair of headphones.

The Z3 Tablet Compact runs on Android 4.4.2 KitKat and includes Sony's usual enhancements and add-ons - an update for Android 5.0 Lollipop is due in early 2015. One of our favorite Sony enhancements, shamelessly stolen from LG, is the tap to wake function, which for some reason is turned off by default (perhaps not so shamelessly after all). You'll find the option for it buried in the Settings menu, under the Display sub-menu. 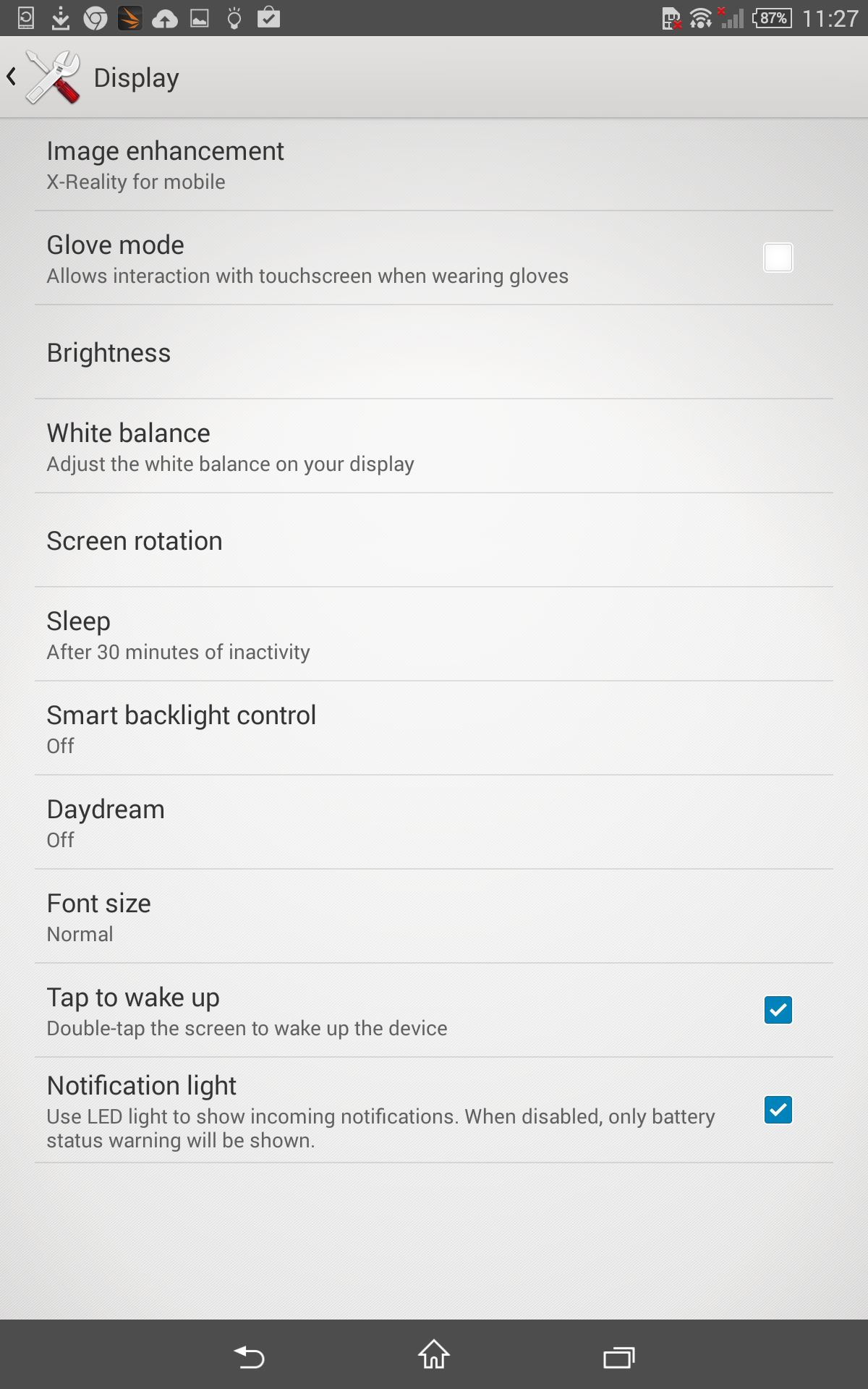 Sony's stand-out feature is Remote Play, which lets you use the tablet as a display for your PlayStation 4. The PS4 console still does all the processing, but it streams the content to your tablet display, letting you continue your game while your TV is off or being used for something else - or when you don't feel like getting out of bed or, of course, when you're in the toilet. Actually, since the Z3 Tablet Compact is waterproof, if you can find a waterproof PS4 controller (or you want to put yours in a Ziploc bag), you could play Destiny or Titanfall while you're taking a shower. What a time to be alive. 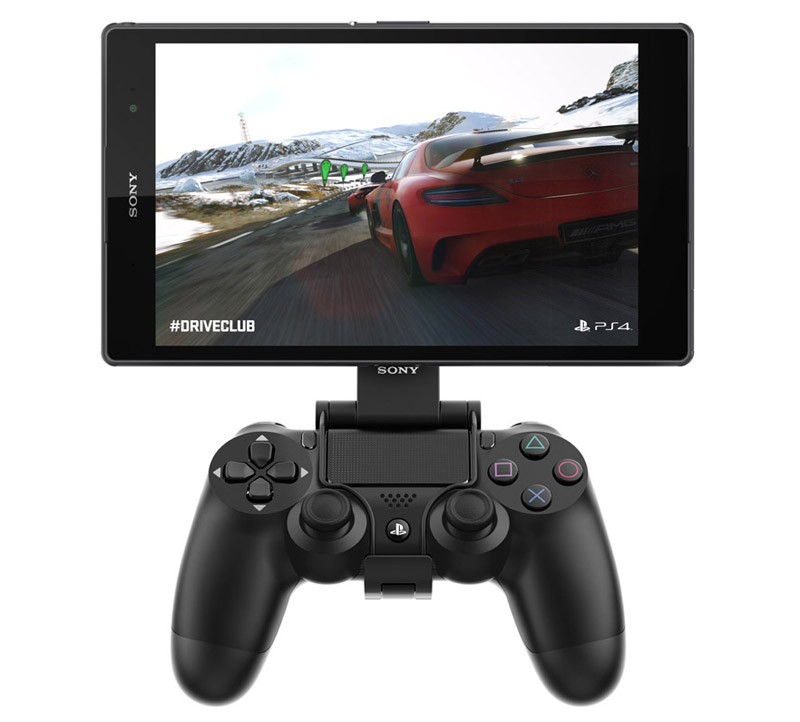