Having been officially released during the later half of 2013, Sony's SBH52 Bluetooth Wireless Headset and Stereo Speaker was one of those devices that sort of flew under the radar of cool gadgets. It wasn't until the official launch of the Xperia Z1 that we actually got a chance to see and play around with the device. The SBH52, as you would so imagine, serves the basic function of being a wireless headset whenever needed to afford its user easy control of the devices. Additionally, as the title would suggest, the SBH52 also doubles as a portable speaker. Here's our thoughts about it.

So aesthetically, the SBH52 follows the same design language as its brethren, the SBH50. The only real difference between the two is that the SBH52 is actually slightly slimmer than the SBH50, as well as being equipped with a relatively powerful speaker at the back of the device. On the front, you get a simple LED screen that lights up whenever activated by either the buttons on its sides or by the 'function' button directly on top of the screen.

The scrolling and play/pause buttons are located on the right side of the SBH52, along with a 'return' button that allows you to scroll through some of its basic functions, such as WALKMAN (or the basic music player for non-Sony smartphones) activation, retrieving missed calls, radio or even the device's settings.

On the top-left of the SBH52 is the volume rocker, which we're sure you don't need us to tell you how that works. What you see behind the SBH52 is actually quite interesting. The clip for the SBH52 shows the NFC symbol, which indicates that it can establish an instant connection to any smart device that is NFC-capable. But one of the more interesting features is the tiny speaker grill located just below the clip. We'll get to that in a bit, but believe it or not, that little speaker is actually a deceptively loud speaker. 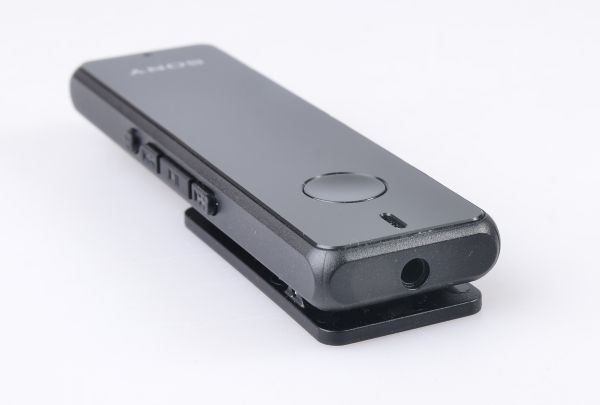 The subtitle above actually refers to the basic earphone function for the device. Like all wireless headset, the SBH52 is actually an excellent wireless device for listening to your music on the fly. It uses Bluetooth 3.0 technology, so sound replication from your media device is transferred in perfect sync to your earphones with almost no loss of audio quality. Music quality is determinant of the file or track quality, but rest assured, we heard no distortion or breaking as we blasted through the earphones at maximum volume. Even while using the built-in radio transmitter, the reception was good enough and presented no noise in the background at all. So, we've covered the basics with the earphones on the SBH52. Now let's move on to one of the party tricks of the SBH52: the built-in stereo speaker. With Sony's impeccable reputation of creating high quality audio devices, we thought the speaker on the SBH52 would be amazing. However, the end result was a bit of a hit-or-miss scenario. Sound placement and precision was surprisingly quite accurate, to the device's credit. It's when we maxed out the volume on the SBH52 during our testing period that it started to break and even show some signs of distortion. However, remember that this stereo speaker was built to be compact and also that it isn't a full blown stereo Hi-Fi system, and all is forgiven. One of the more interesting features of the SBH52 is how the device actually doubles as an extension of your smartphone in two ways. The first is, of course, through the use of earphones and taking calls with the SBH52 clipped to your shirt. The second method is (and we're not joking with this) to pick it up and to answer your calls on it like you would with a telephone. Alternatively, because that speaker is actually quite loud, you can also press the back button and put the call on loudspeaker, effectively making the SBH52 an impromptu con-call device.

In conclusion, the SBH52 is something which we believe many people could take to in the future. With more than just a single function, it's a personal media player and a loudspeaker all in one. Granted, the speaker on it may need a little refinement to it, but Sony has plenty of time to perfect this in the near and immediate future. Until, if you're looking for something that helps you and other people communicate clearly, we do humbly recommend that you take this Bluetooth wireless headset and stereo speaker into consideration.