When Samsung first announced that they were discontinuing the GALAXY Alpha, we weren’t quite sure what to feel. Though flawed, the Alpha proved that if they wanted to, Samsung can make a premium high-end phone with a metallic frame, which was something many of their fans were yearning for after generations of polycarbonate on the GALAXY S series. Of course, they also announced at the same time that the Alpha will be succeeded by the A5. Now we’re not quite sure what the S of GALAXY S series stands for, but we’re just going to assume the A in the Samsung GALAXY A5 stands for Alpha. The A5 has begun entering selected markets since November last year, and will be officially launched in Malaysia tomorrow, January 9. But before that, it is here, in our hands.

Two comparable scenarios come immediately to mind, when it comes to comparing the A5 in relation to other Samsung phones: one is HTC’s One (M8) and One (E8), where the latter is essentially the same phone as the former, save the polycarbonate body and simpler camera. The other was the iPhone 5c, a watered-down version of the 5s, in terms of price and performance. With the A5, Samsung has gone down Apple’s path, to the potential dismay of Samsung’s devotees.

That said, the A5 is a thing of beauty. Like its predecessor, the Alpha, the body is predominantly metal, is extremely light and thin, and consequently very nice to hold in the hand. Unlike the Alpha, however, the A5 has a metal unibody, which means no access to the battery or the rest of the innards. To get around that, the nano-SIM and MicroSD slots are on the outside, sharing the same side as the power button and masquerading as buttons themselves. 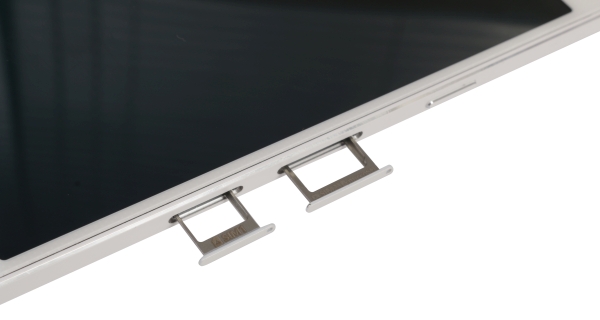 Moving to the front, the display is a 5-inch HD (1,280 x 720) Super AMOLED screen, slightly larger than the Alpha, but with the same resolution. Images are sharp and colors are vivid and vibrant. This is great to go with the non user-removable 2,300mAh battery, which means a better battery life. Above the screen, you have a 5-megapixel camera and what we would guess to be ambient light sensors; one of them contributes to the Smart Stay feature, which keeps the screen active beyond its timeout duration as long as you’re looking at it.

Other things you’ll find on the outside are the Micro-USB and the 3.5mm audio port at the bottom, the volume rocker on the left and the 13-megapixel main camera at the back, flanked by an LED flash on the left and a similarly shaped speaker grill. On the inside, you get the usual Android 4.4 KitKat OS with Samsung's TouchWiz UI, along with other proprietary features like Ultra Power Saving Mode, Private Mode, and the Smart Stay mentioned earlier, among others. Also, the screen is large enough for you to make sense out of a multi-window mode, so it’s something that you can take advantage as well; good for those times when you are listening to a song on YouTube and want the lyrics to be on the screen at the same time. The main camera has a 13-megapixel sensor, which is slightly over what you get from the Alpha. We were quite pleased with it, especially considering the fact that it is positioned as a mid-range phone. Images are nice and clear, with pretty accurate color reproductions as well. There are a number of camera settings to play with, such as ISO, white balance and exposure, aside from the usual panorama and night modes. The front 5-megapixel camera has some of these as well, in addition to the usual selfie-related functions. Write a Review
Compare This | Specifications
Metal unibody
Very light and thin, making it very comfortable to use
Multi window is nice to have, and the 5-inch screen accomodates it just nicely
Battery life seems subpar, despite the large capacity and HD resolution
Speaker performance is compromised by design and positioning.