We tested the Razer Blade Stealth with our usual suite of ultrabook benchmarks. Even though it could be considered a gaming product, we omitted additional tests that we run on gaming systems because without the Razer Core dock, the Blade Stealth is a bona fide ultrabook. For comparisons, we included the two competitors that Razer singled out – the Dell XPS 13 and the 13-inch Apple MacBook Air (early 2015 model) – in addition to a slew of Ultrabooks from our most recent shootout.

Note: The Storage benchmarks reflected here are version 1.0 scores. We also ran version 2.0 – which has been updated to better support NVMe SSDs – and got a higher score of 4,936. The Razer Blade Stealth uses an NVMe PCIe SSD.

We also ran the updated Adobe benchmark with Adobe After Effects CC installed, and obtained a score of 3166.

PCMark 8 puts test systems through a variety of workloads in order to provide an objective measure of comparison for performance in real-world applications. The Razer Blade Stealth turned out quite a strong performance in all the benchmarks, and it was the notebook that came closest to rivaling the Acer Aspire R13. It had the largest lead over the other notebooks in the Home and Work benchmarks, which are arguably the lightest benchmarks as they test a system’s ability carry out a variety of basic computational tasks and office workloads.

It was around eight percent quicker than the Dell XPS 13 in PCMark 8 Home, and also had a similar lead in the Work benchmark. And while the MacBook Air may look like the worst performer, bear in mind that this is 2015’s configuration. Apple has since updated it with 8GB of RAM, which should help it in tasks that consume more memory, like the Adobe applications benchmark.

The Blade Stealth didn’t do quite as well in the Storage benchmark, but that was probably due to the fact that version 1.0 of the benchmark doesn’t quite take into account the unique behavior of NVMe drives. As we noted in our review of the Microsoft Surface Pro 4, an NVMe drive doesn’t automatically translate into faster performance because they run on an entirely new software stack. In a nutshell, the entire process works differently from AHCI drives, and certain new implementations can end up leading to reduced performance in the benchmark. The Dell XPS 13 uses an NVMe SSD as well, and it ended up performing very similarly to the Razer Blade Stealth.

With that said, Razer’s Ultrabook sports near identical specifications as the other Ultrabooks here. Other than the Apple MacBook Air, all the notebooks have the same Intel Core i7-6500U processor and 8GB of RAM. So while the numbers may look rather different on paper, you’re not likely to notice any glaring differences in actual use.

Ultimately, the Razer Blade Stealth proved more than adequate at handling the demands of everyday computing. We’re in the habit of opening an inordinate amount of tabs in Google Chrome, and the Blade Stealth handled everything without a hitch. At the same time, we also launched multiple programs, including things like Microsoft Word, Excel, and Adobe Photoshop CS6 and After Effects CC. Even then, the notebook remained responsive and application switching was fluid with no delays. 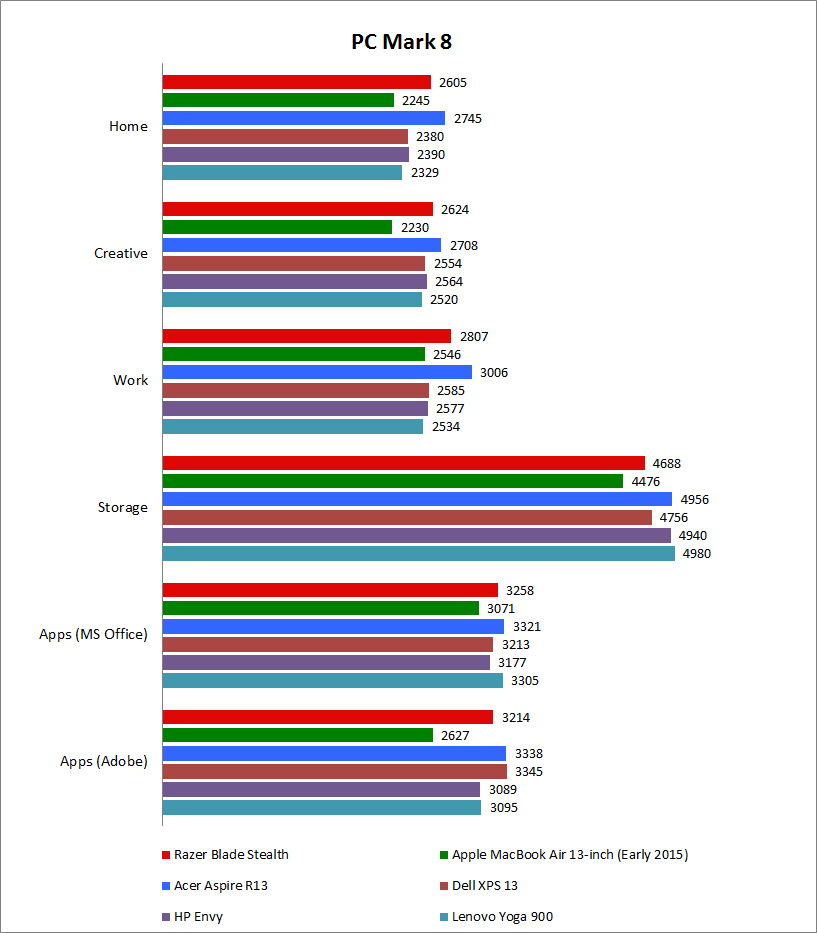 This may be a Razer notebook, but it still lacks any discrete mobile GPU and instead relies on an Intel HD Graphics 520 iGPU for graphics processing. This means that it’s not going to be any better at running games than the other notebooks with the same iGPU.

Unsurprisingly, its performance was very similar to the other Ultrabooks, although it did end up behind its competitors. In both 3DMark Fire Strike and Cloud Gate, it was around five percent slower than the Acer Aspire R13, which was among the top performers among the notebooks equipped with the Intel HD Graphics 520.

Strangely enough, the Apple MacBook Air’s Intel HD Graphics 6000 outdid everything else in Fire Strike, but that was only by a small margin, and it ended up falling behind in Cloud Gate, where it was around five percent slower than the Razer Blade Stealth. All in all, there was little to differentiate the Intel HD Graphics 520-equipped notebooks here. 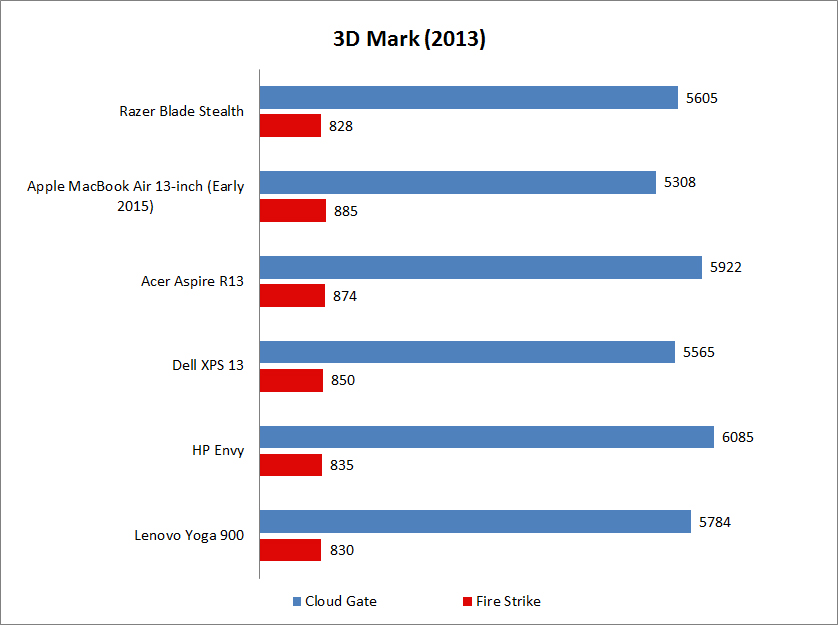 The Razer Blade Stealth managed to edge out the other Ultrabooks in Far Cry 2. But as in 3DMark, because most of them share the same iGPU, they all ended up within a few frames of each other. At Medium settings, the Razer Ultrabook was around nine percent faster than the slowest Intel HD Graphics 520 notebook, the Lenovo Yoga 900. 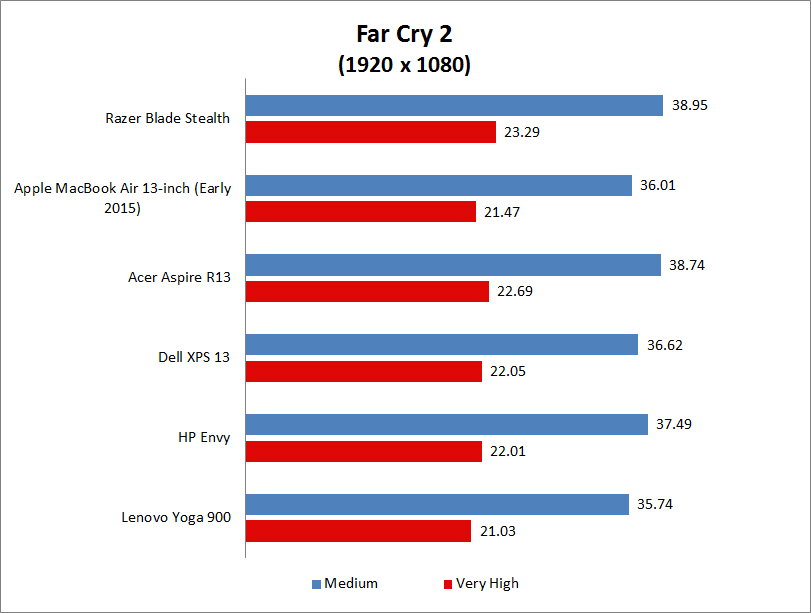 Razer’s Ultrabook managed the same in Tomb Raider, where it inched to a small lead over the HP Envy, which had the next best performance. At High settings, it was just over 12 percent faster than 2015’s Apple MacBook Air, and around five percent quicker than the Dell XPS 13.

However, it’s still the case that none of the tested notebooks were able to output enough frames to allow for a smooth, playable experience, so Tomb Raider is better taken as a relative measure of graphics performance rather than an indication of gaming prowess. 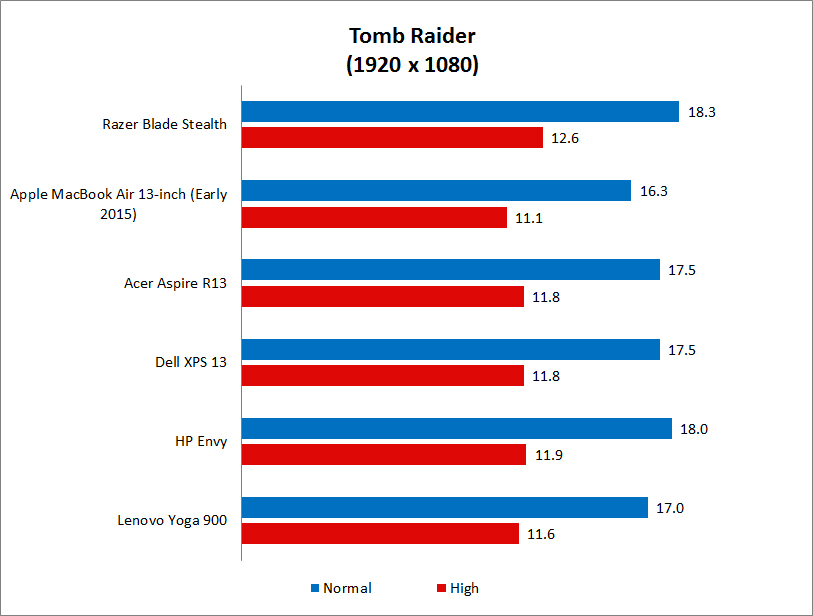 Unfortunately, battery life is one of the Razer Blade Stealth’s weaknesses. In PCMark Home’s built-in battery life test, the Blade Stealth lasted only 197 minutes (with the Chroma keyboard turned off too), behind even the HP Envy, which had a similar-sized 45Wh battery. On the other hand, the MacBook Air continued its class-leading performance with an impressive 323 minutes of battery life, beating out even the Lenovo Yoga 900, which had a larger 66Wh battery versus the Air’s 54Wh pack.

When it came to general use, the battery level on the Razer ultrabook was down to 45 percent after slightly over three hours of light web surfing at 40 percent brightness. It takes slightly over two and a half hours to recharge over the Thunderbolt 3 port, which also feels a bit on the slow side. The Blade Stealth may be intended to be an ultra-portable notebook, but its battery performance casts some doubt on that status. 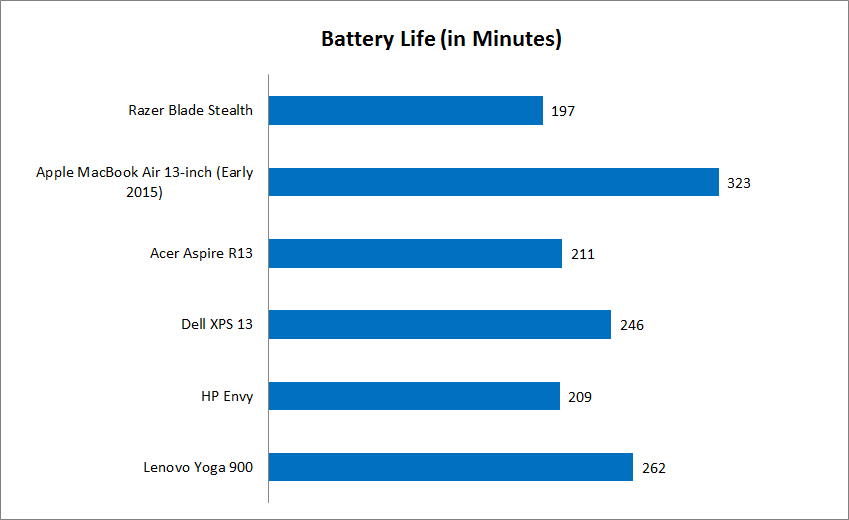 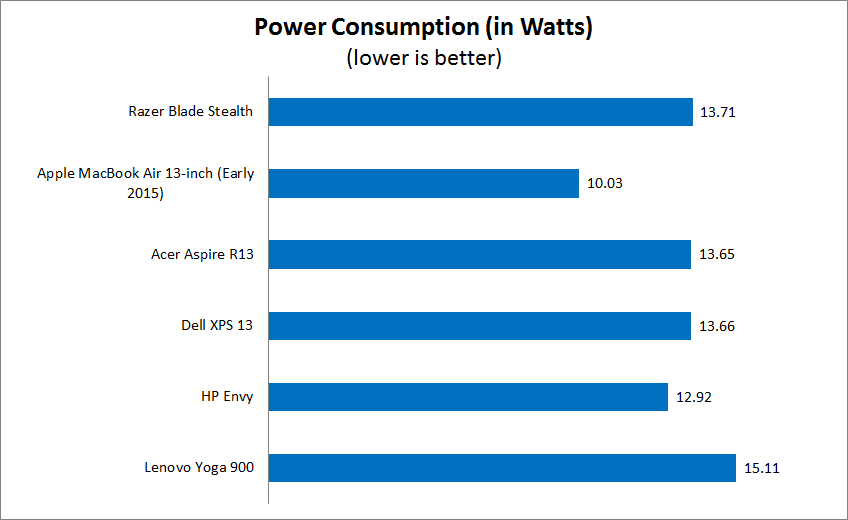 Our portability index takes into account battery life, weight, and volume to provide a measure of how easy a notebook is to carry around relative to other compared systems. The higher the figure the better, and the Razer Blade Stealth came in just behind its two main rivals, the Apple MacBook Air and the Dell XPS 13. Razer has done a good job in making the notebook quite compact and slim, but it was ultimately dragged down by its subpar battery life.

Given that portability – and consequently the ability to work untethered to a power point – is a key factor in choosing an Ultrabook, the Blade Stealth’s less-than impressive battery life may be a deal breaker for some. Again, it depends on your usage habits. Battery life is not abysmal, and may very well be enough for most users, but those who demand truly outstanding battery life will come away disappointed. 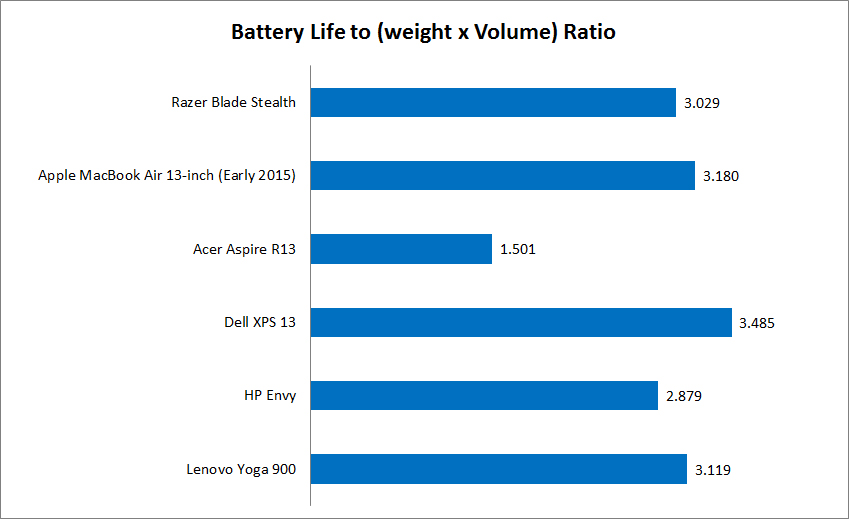