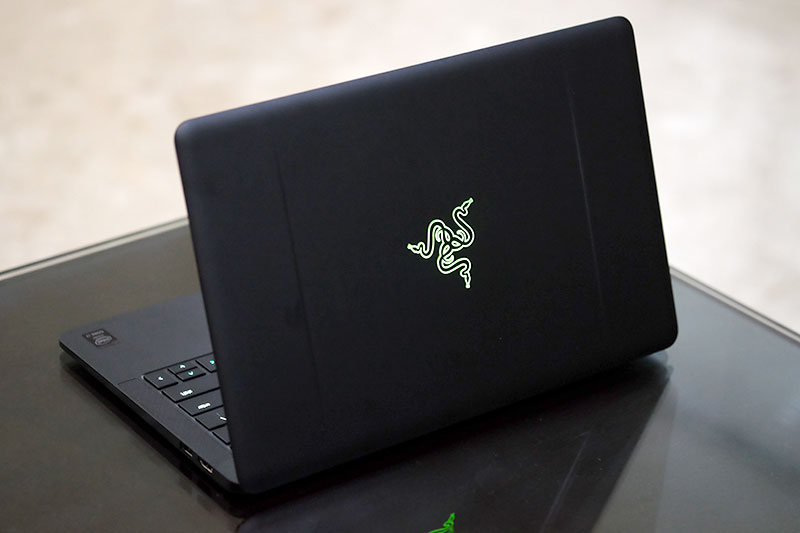 We’ll say this about the Razer Blade Stealth – for a notebook with a 12.5-inch display, it feels more solidly built than you might expect. For starters, it’s constructed entirely out of CNC-milled aircraft-grade aluminum, which successfully conveys a feeling of premium quality and ensures that there’s zero flex to the keyboard. You can even open the lid single-handedly without having to hold the notebook down with your other hand, which should tell you just how solid the base is.

There’s also no forgetting the gorgeous matte black finish that gives the notebook its stealthy look, until you activate the Chroma-illuminated keyboard that is. Black is really, well, the new black, and we wouldn’t want for the Blade Stealth to come in any other color. It’s also a Razer product, so it’s not like there was any real possibility of that happening in the first place.

However, while not quite a grease magnet, the notebook did pick up some blemishes in a short period of time, and the black lid will show off dust or other stains rather clearly. If you have sweaty palms or have your hands perpetually in a bag of chips, maybe don’t touch the notebook before wiping them down.

Then there’s Razer’s signature triple snake logo on the lid itself. The logo glows a bright green when the notebook is powered on, but there’s the option to turn the lights off in Razer’s Synapse software, perhaps for when you want to appear a little less obnoxious. With that said, the logo is still quite striking – it is bright green after all – even with the LEDs powered off. For better or for worse, it’s probably the most attention-grabbing aspect of the Blade Stealth’s minimalist design. It also sports a glossy finish, which may appear cheaply done to some (now that we think about it, it looks a bit like someone slapped a sticker on the lid) but that’s really a matter of personal opinion.

The astute among you will also have noticed that it’s a little on the large side for a notebook with a 12.5-inch display. It measures 321 x 206 x 13.1 mm, which is bigger than the Dell XPS 13’s ultra-compact 304 x 200 x 15 mm frame. That’s largely due to the large bezels around the display and Razer’s desire to include a full-sized Chroma keyboard. As it turns out, the thick bezels, which can look a bit dated on an otherwise sleek notebook, are there for a reason.

According to Razer, it decided to pick function over form when selecting a display for the Blade Stealth. This means that instead of focusing on shrinking the bezel like Dell did with its InfinityEdge displays, Razer wanted the freedom to implement a 4K display that covers 100 percent of the Adobe RGB color space (in simplified terms, this is the range of colors that a monitor or other device can display). That wasn’t the end of the Dell comparisons however, and Razer went on to point out that the 3,200 x 1,800-pixel display on the XPS 13 can only display 72 percent of the Adobe RGB color space. 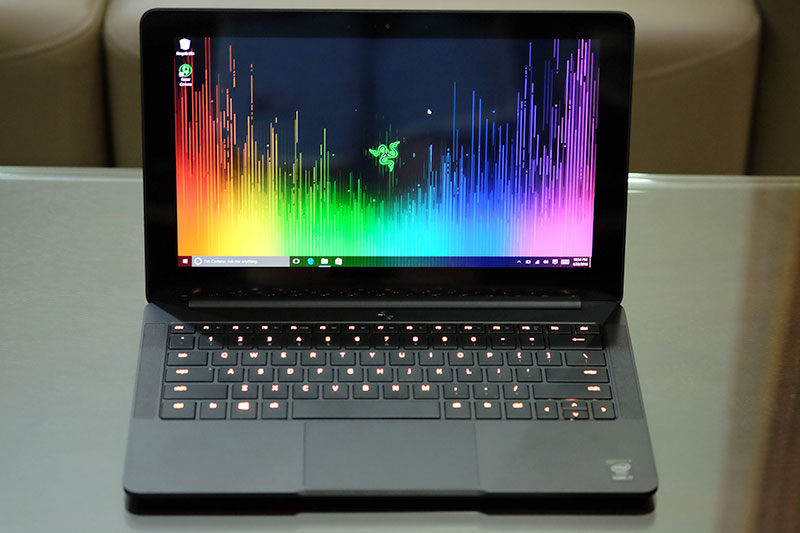 But those are all abstract figures, and it still doesn’t quite explain why Razer couldn’t implement thinner bezels. Would a 4K display not fit in there? Ultimately, we think it may have something to do with engineering costs and the need to keep the Blade Stealth affordable. For what it’s worth, we’ve used both machines, and there didn’t appear to be any significant difference between the displays. Granted, we didn’t get the chance to place them side by side for comparisons, but the key takeaway is that Razer’s screen didn’t take our breath away with eye-popping colors or anything like that (the 4K display may prove more impressive, but we didn’t get to see it). Furthermore, despite the ultra-thin bezels on the XPS 13, we didn’t feel like the image quality was lacking in any way.

Still, don’t get us wrong. We’re not saying that the Razer Blade Stealth has a bad display (quite the contrary in fact). Our review unit came with a 2,560 x 1,440-pixel IGZO touchscreen panel, which is actually fairly bright and vibrant, with really deep blacks. Viewing angles were also excellent, and we were able to continue to watch Daredevil even while sitting at quite a large off angle. The display took to walls of black-on-white text and National Geographic photo galleries with gusto, and there’s little to complain about. Nevertheless, we feel the need to make an obligatory note about screen reflection – this is a glossy display, so yes, you might need to turn up the brightness to mitigate reflections. 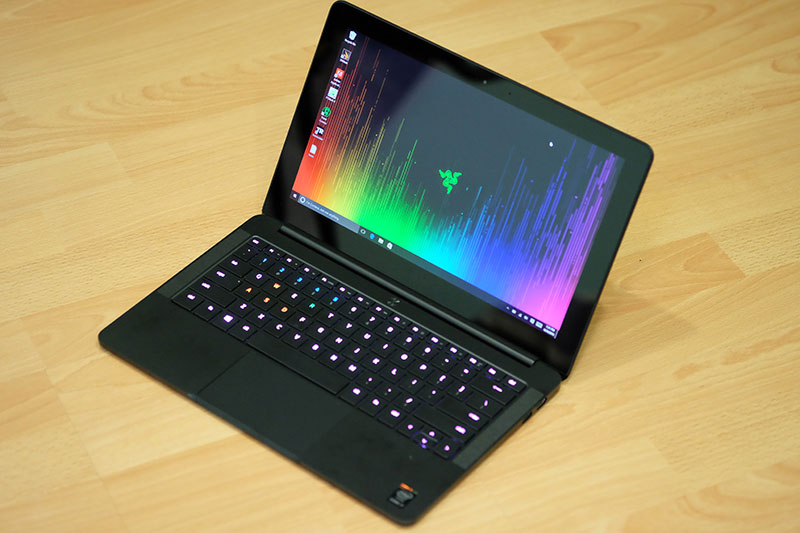 Is there anything special about this IGZO display, you ask? In a nutshell, IGZO theoretically enables higher resolution displays, lower power consumption, and higher refresh rates. It is also not a panel type like IPS or OLED. Instead, it is a backplane technology – the materials and designs used for the thin-film transistors that turn individual pixels on and off – comprising a transparent, semiconducting compound that uses Indium Gallium Zinc oxide as the semiconductor in place of amorphous silicon (a-Si). IGZO transistors are smaller than their counterparts that use a-Si, so Razer has been able to easily scale up the display resolution and squeeze more pixels in. The smaller size also means that the layer of IGZO transistors doesn’t block as much of the backlight as a-Si would for the same pixel densities, which means that lower brightness levels, and hence less power, is required for a certain output. Finally, the higher electron mobility of these transistors also theoretically enables higher refresh rates and faster pixel switching, but the Blade Stealth still has a regular 60Hz display.

The Blade Stealth uses a Killer Wireless-AC 1535 module, which offers a maximum throughput of up to 867Mbps over two spatial streams. But the best part is that it supports MU-MIMO, although you'll still need a compatible router and other MU-MIMO devices to take full advantage of the benefits (MU-MIMO lets the router serve multiple devices all at once, which translates into shorter wait times).

And now for the port connectivity options, which is what really makes the Blade Stealth so special. The Thunderbolt 3 USB-C port is located on the left edge, alongside a green-colored USB 3.0 port and 3.5mm audio jack. The Thunderbolt 3 also doubles as the charging port, and it’s where you would plug in the Razer Core dock if and when you decide to get one when it becomes available. This is also the first notebook and dock pairing to support AMD’s XConnect, a technology that allows you to switch between discrete and integrated graphics on-the-go, and even add or remove an external graphics card without needing to reboot the notebook. 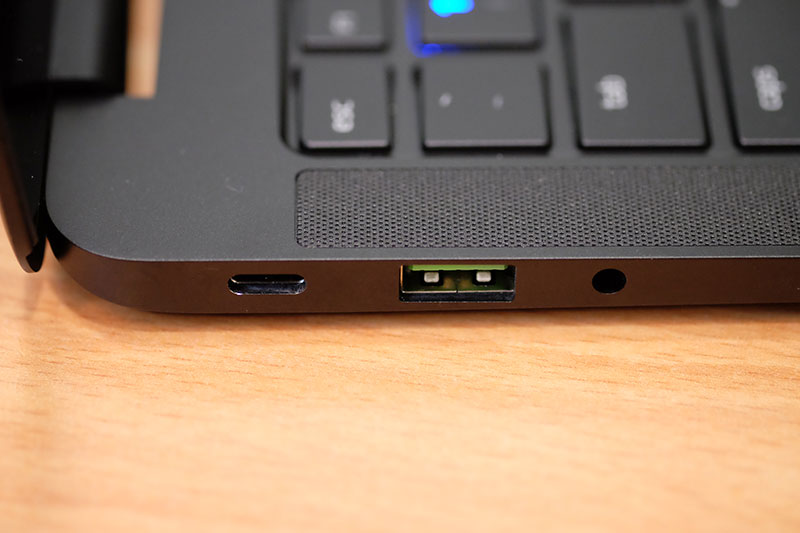 A second USB 3.0 port and full-sized HDMI port are located on the other side. We like how Razer has managed to include the HDMI port, because it could just as easily have dispensed with it since notebook has a Thunderbolt 3 port that supports video output over DVI, HDMI, and VGA (via adapters) anyway. 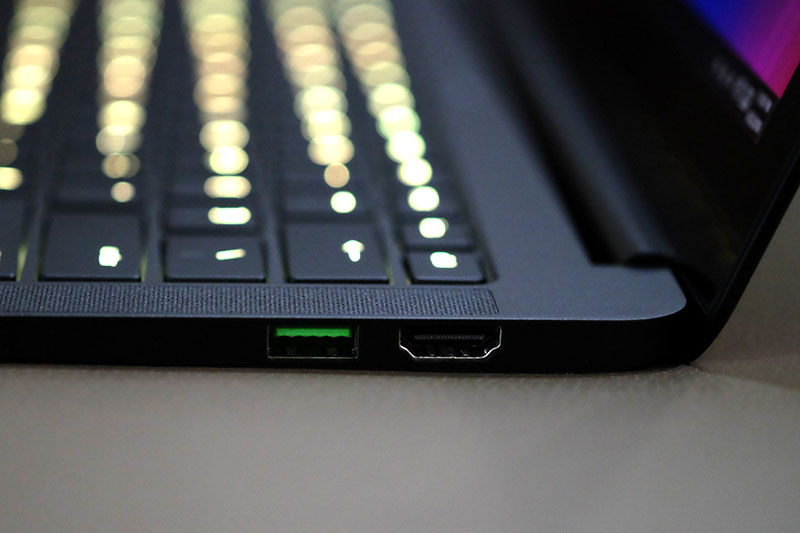 The speakers are the final feather in the cap of the Razer Blade Stealth. Even though this is ostensibly a 12.5-inch notebook, Razer has managed to cram good-sized ones on either side of the keyboard. Upward-facing speakers have the best possible orientation, so your tunes or movies don’t end up blasting into the table. However, speaker performance was quite a mixed bag. While they could go fairly loud and managed not to sound too thin or harsh, clarity was a bit lacking and there was some distortion at the high frequencies even with the volume slider set in the middle. 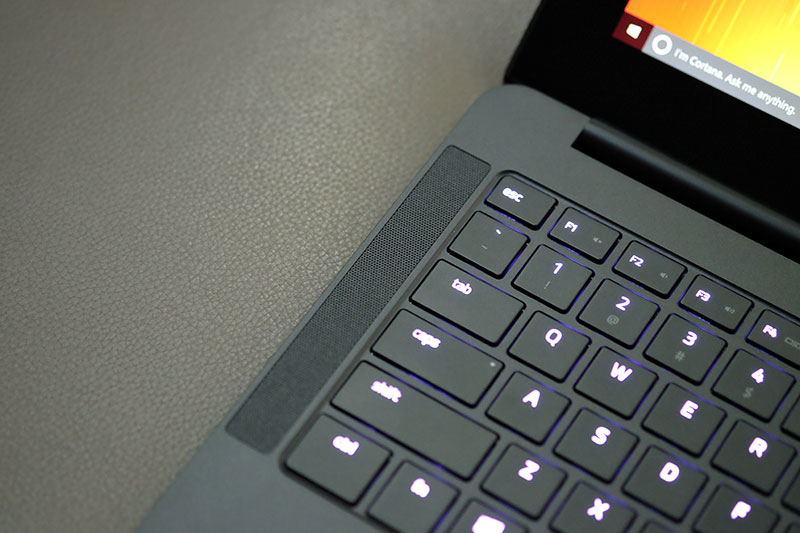