Is there a pot of gold at the end of the rainbow? 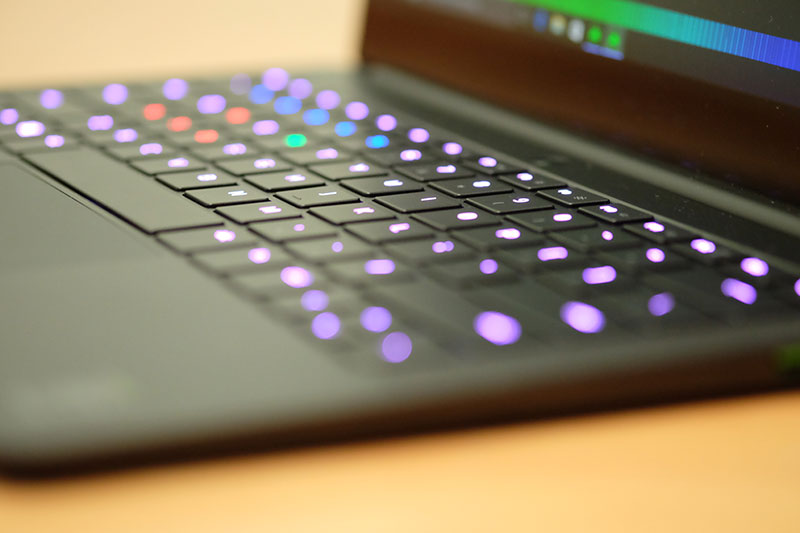 The Chroma keyboard deserves its own section because of the sheer number of things you can do with it. But ironically enough, the keyboard is simultaneously one of the best, and also one of the weakest aspects of the Razer Blade Stealth.

For one, key travel feels awfully shallow, even for an Ultrabook of this size. Furthermore, even the detachable keyboards of the HP Elite x2 1012 G1 and Microsoft Surface Pro 4 felt like they had greater depth to them. The chiclet keys are also set so close to the surface that it became difficult to differentiate between individual keys while touch typing, which resulted in a fair bit of typographical errors. We’re thankful for the full-sized keyboard, but the combination of shallow key travel and flat keys means that it may require a bit of getting used to. If you intend to do a lot of typing on your notebook, this is something to take note of. 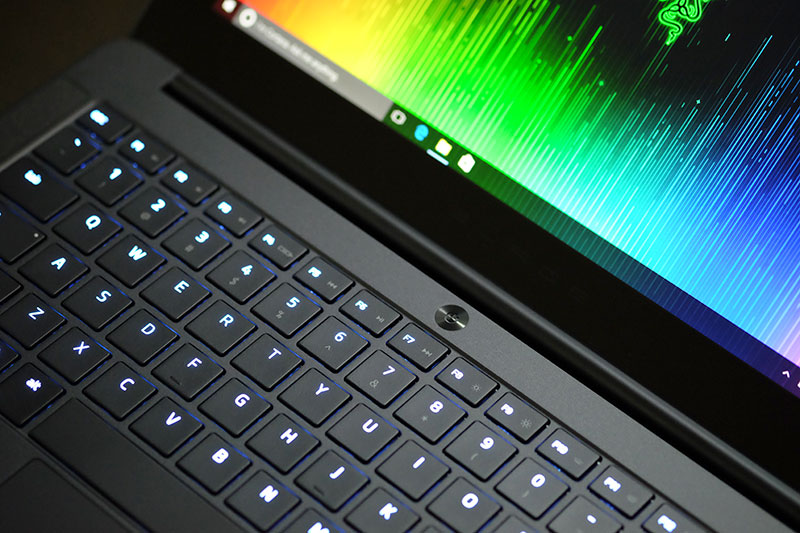 But now on to the good stuff. The Razer Blade Stealth is the first notebook to support per-key RGB illumination. This means that you can customize what color every single key glows, or how it dazzles, flashes, and pops, should you feel so inclined. If that sounds a bit excessive, that’s because it is. And it doesn’t matter that probably only a few folks will take the time to paint their own personalized rainbow – we simply relish the fact that the option is there.

To start matters off, opening up Razer’s Synapse software gives access to a few basic options, like the ability switch between custom profiles that you downloaded from the Chroma Workshop or created on your own. For some quick effects, you can take your pick of six different illumination modes, including things like spectrum cycling, reactive, breathing, ripple, and wave. Wave is our favorite if we may say so – with the lights off, the keyboard transforms into a veritable Bifrost. 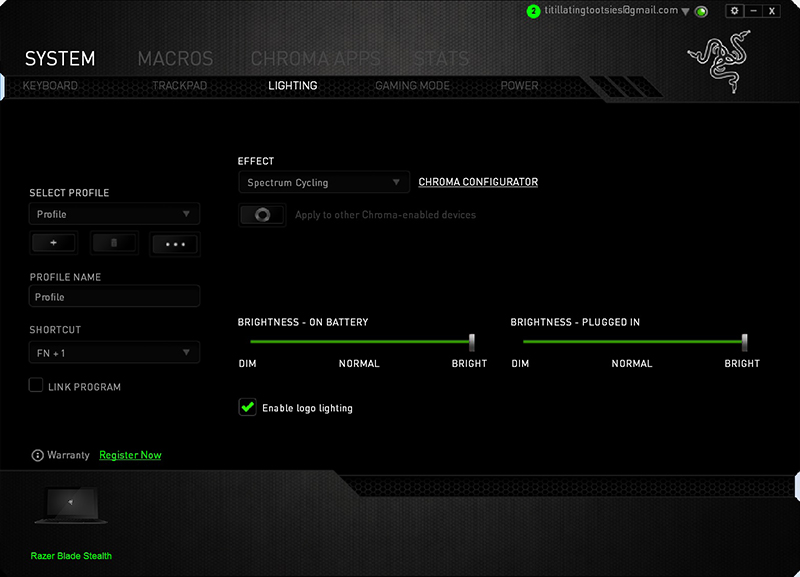 There’s also the option to disable the Razer logo lighting on the lid, and set the brightness levels for when the notebook is powered or running off its battery. It goes without saying that all these fancy lights are a drain on the battery, so you’d do best to turn them down (or off) if you want to conserve some juice. Alternatively, if you absolutely must have some illumination (because the night is dark and full of terrors), Razer says that setting the keyboard to a solid red, green, or blue color will help save battery as well.

But click on the Chroma configurator option, and that’s where the fun begins. The user interface can look a little overwhelming at first, but Razer has helped to smooth things over with certain key presets for different game genres, among them FPS, MOBA, and RTS. These settings group the keys into clusters most likely used by the different genres. For instance, the FPS preset singles out the WASD cluster, the R key, and numbers 1 through 5 for customization, while the rest of the keyboard is lumped together as one huge cluster.

If you’d like to create your own effects, there’s a list of pre-defined clusters ready to allow you to quickly select things like the arrow or number keys. But if you’re shooting for something outlandish or quirky, you can select individual keys and add effects to them in the Effects Layers panel.

This panel stacks various lighting effects as layers, with the topmost layer taking priority over layers on the bottom. Here’s a shot of our own settings, modeled after the FPS preset. The WASD cluster, R key, and select number keys all have their own static color, while the rest of the keyboard is set to cycle through the entire color spectrum. In this case, the three static layers sit on top of the spectrum cycling layer because if the order was reversed, the whole keyboard would simply be set to spectrum cycling. 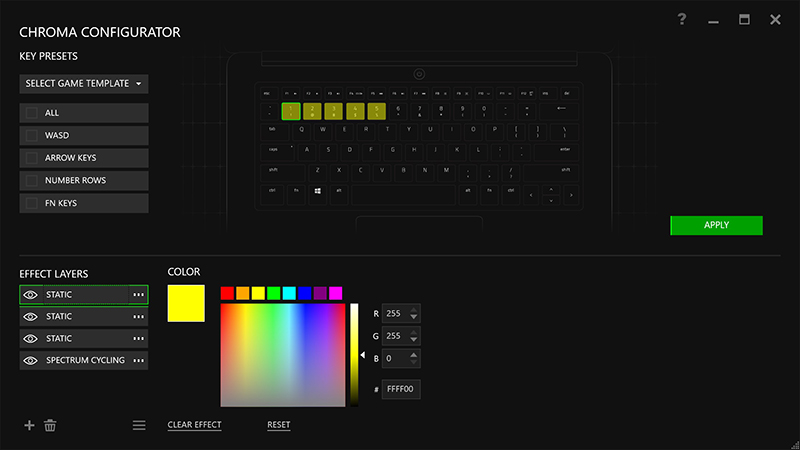 Each effect also comes with its own control panel. The options for static colors are simple, just pick something from the color palette and you’re done. But when it comes to the settings for the wave effect, you have access to an array of mind-boggling options like width (how wide the wave is), angle (the direction the wave is flowing in), and the colors that the wave 'stops', or crests, at. 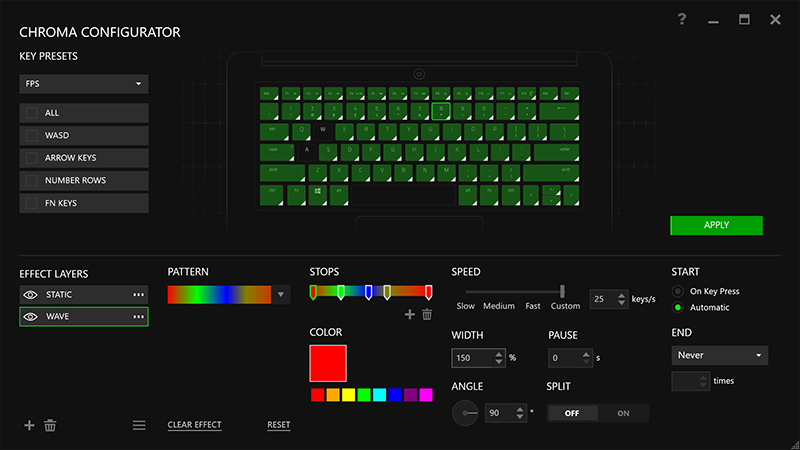 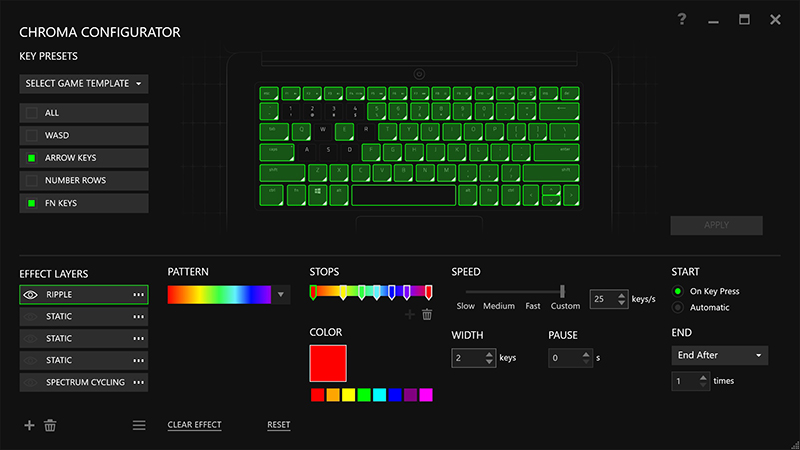 Seriously, unless you’re a staid utilitarian, what’s not to like?