Plantronics isn't usually a name you'd associate with consumer headphones, but this is a perception that is steadily changing since the introduction of the BackBeat FIT and BackBeat PRO. Now, there's another entry in the consumer market by the brand, and it's called the BackBeat SENSE, which is something that's put a smile on our face, and we haven't been excited about with a pair of headphones for a very long time.

The first thing you'll see is the packaging, and boy, does it feel premium. Inside, you'll find a fabric carrying case beneath some black wrapping paper. You'll find two compartments on the fabric carrying case: the main one houses the unit itself, while the secondary one is where you'll find the manual, the 3.5 mm audio cable with in-line controls and mic, and the micro-USB charging cable. 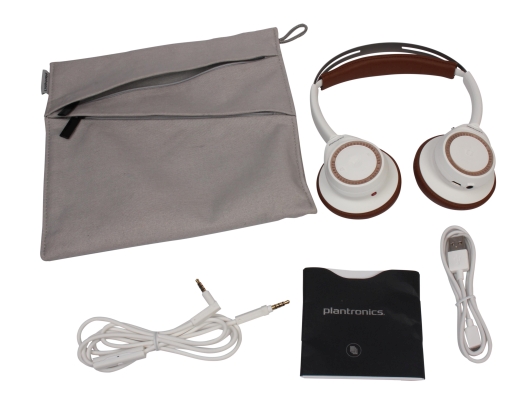 The cables probably gave away the fact that the Plantronics BackBeat SENSE is a pair of Bluetooth headphones. And a good looking one at that, to match the fancy packaging. The frame of the band is a metal one, extendable from plastic arms on both sides. Right beneath it is a secondary "self-adjusting" one padded with memory foam wrapped in soft leather. This is held by a rubber strip that also extends from the plastic arms. The plastic arms themselves have a nice matte finish to it, leading to the ear cups, both that swivel 90 degrees in both directions, and each housing a different set of controls.

The one on the left houses most of the media tools. There's the play/pause button, and the skip forwards and backwards button flanking it. Around those is a knob of some sort that controls the volume; you turn it up or down by flicking the knob towards the corresponding direction. There's also a button at the bottom that, when pressed, pauses your music and activates the microphones in both cups, letting you listen to what's going on around you. This is a feature that you'll find quite commonly among Plantronics headphones, the idea being you don't have to remove them when someone approaches you and needs to talk to you.

Depending on the direction you're facing, you can sometimes hear things louder using this feature than with your own ears. However, using this for any other purpose besides the unethical one that is eavesdropping is pointless, as it’s so much easier to take off the headphones that to reach for the button, and people might still think that you're being rude anyway for talking with headphones on. On the inside, you have a fairly thin layer of memory foam in soft leather serving as earpads. The perforations are done in a way that clearly spells out the L and R on each side. 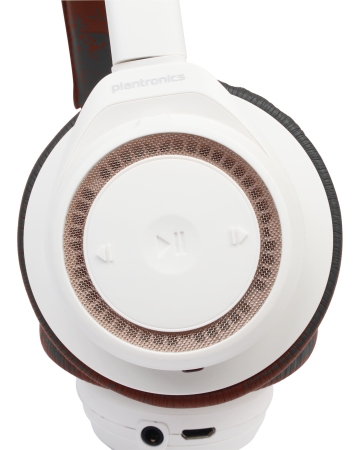 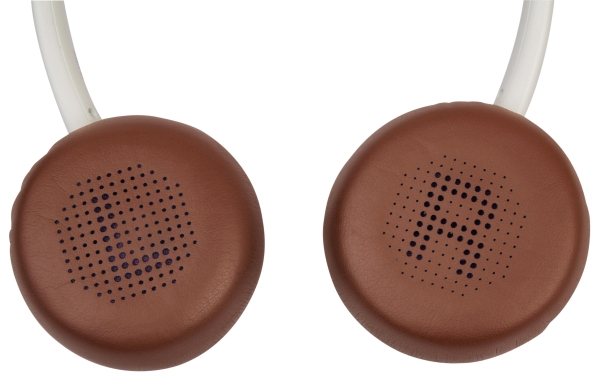 Things are simpler on the right. There's a switch that turns the headphones on - which you won't need if you intend to make use of the cables - when positioned in the middle. Hold it all the way up and you'll initiate the Bluetooth pairing mode. Speaking of which, the BackBeat SENSE can have two devices connected simultaneously, which does come in handy in certain situations. There's a button on the side that, when turned on, tells you - in a female voice - the battery level and the number of devices connected, when pressed. Press it when a call is coming in and you'll pick it up. You won't be able to bring up Google Now or Siri with this like you could using the button on the cable, however. Just below the button are five LEDs that tell you the battery charge level visually, which are nearly invisible when not alight. 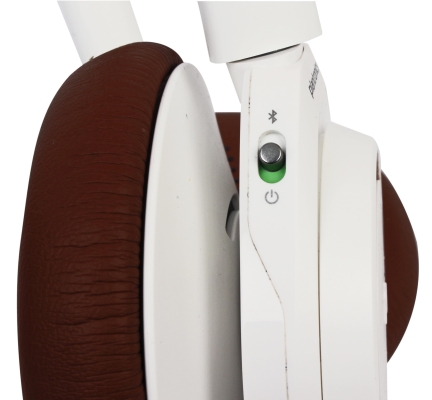 Down at the bottom are the 3.5 mm audio and micro-USB ports. The inside is where things get interesting: beneath the memory foam and the leather are pressure sensors going round the whole ring. This allows the backBeat SENSE to detect when you have it on or off; it pauses your tracks and videos when you take it off - or when nothing is pressing against the sensors, and resumes when you put it back on. You can trick it to keep playing when you take it off by pressing a finger against the sensors if you feel like messing around, although there’s no actual benefit of you doing so other than for giggles. This is a feature that we feel other headphones should adopt, as it is the epitome of convenience; once you get used to your music automatically stopping when you need to take the headphones off and resume when you put it on, it will be a troublesome hassle indeed to have to manually do so with other headphones.

Another notable thing about the SENSE is its battery life. Plantronics sasy it can give you 18 hours of straight, non-stop music, and we’re quite inclined to believe it. Using it from the start of the working day to the end, its battery level only went down to “medium,” with three of its LEDs alight. This is, to put it simply, amazing battery life. Few other wireless headphones have what it takes to do its job for three-quarters of a day with no rest in between, and in our practical test, after going through slightly under nine hours of use it can seemingly go another nine.

With all the smart features that we never knew we needed built into this pair of headphones, it would be a terrible shame if it didn’t perform at least decently on the most important department: actual audio performance. With fingers crossed, we proceed to our formal audio testing.

The first on our list is NY Rush by Yoko Kanno & The Seatbelts. On this track, every instrument was clearly heard. Resonance from the cymbals and saxophones sounded natural.

Onto the next track: Joanna Wang’s The Best Mistake I’ve Ever Made. Vocals and instruments were clear, and the resonance in them was good too.

Moving on with John Mayer’s Why Georgia. With natural resonance and good detail overall, it’s another good track with the BackBeat SENSE.

The last track on our test list was In Love With The DJ by ATB. We were a little worried that the BackBeat SENSE would suffer on the bass department, but gladly, that wasn’t the case. It’s not stellar by any means, but it wasn’t poorly either.

The Plantronics BackBeat SENSE is another of the company’s entry into consumer space. On the outside, it retains its signature Plantronics look. But upon closer examination, we discovered many extra features that are actually useful, and that we never realized were a good idea until we came across this pair of headphones.

While its audio performance is good, it isn't on par with some of better-known cans like the Audio Technica M50X or Sennheiser HD 598. All that said, its true value lies in the useful features mentioned earlier.

The best feature on a pair of headphones since high-fidelity wireless music is, in our opinion, the automatic pausing and playing when the headphones are removed or put on, found on the BackBeat SENSE. This brings so much convenience to the user, especially when someone needs to ask a quick question and the response is such a quick one that it doesn’t justify the effort to pause and play your music or video manually, without missing bits in between. The button to pause the music and use the microphones to listen to what’s going on around you is a bit of a gimmick though, as there are more benefits - and less effort - to just taking the headphones off.

Completing the near perfect package is the long battery life. It’s so long that you could, in fact, use it wirelessly from the moment you wake up and - assuming you wear it with you into the shower, which is a bad idea since it’s not water resistant - leave it on your head until you want to go to bed and the BackBeat SENSE will still be able to keep up. It also takes only about two hours to charge before it can go on another 18-hour music marathon with you.

So, when you put all of this together, Plantronics says it’s worth RM729. If you agree with its maker, then there is little reason why you shouldn’t get it. In fact, we’re not sure what’s stopping the reviewer from getting one himself.