To test out the GTX 1080, we used our testbed, which consists of the following components:

As a comparison, we benchmarked the GTX 1080 against Gigabyte’s G1 Gaming GTX 980 Ti to see how much further the GTX 1080 pulls ahead, but more importantly, it’s actually the closest last-generation graphics card that we had for a head-to-head comparison.

We’ve also updated the drivers to NVIDIA’s latest GeForce 368.16 drivers, and also overclocked the card by an approximate increase of 30 percent of its overall GPU and memory clockspeeds.

The synthetic benchmarks which we used to test the card were:

And the games which we used to benchmark the GTX 1080 are as listed below:

We’ve updated our games list with Ashes of the Singularity, Doom, Rise of the Tomb Raider, and the latest episodic title, Hitman, for the simple reason that these are the latest games that can run on the new low overhead DirectX 12 (DX 12) API (the Vulkan API notwithstanding), and we really wanted to see what sort of performance we could get using the games that run on DX 12. Ashes of the Singularity Ashes of the Singularity is a game that prides itself on being one of the first titles on PC to be DX 12 compliant, as well as being a title in which AMD has long held a frame rate domination. The reason we decided to try add this game to the lot was because NVIDIA has mentioned that the GTX 1080 was capable of performing some asynchronous computing. We’re glad to tell you that the GTX 1080 was definitely able to maintain a pretty steady frame rate for all of the game’s batch tests. As second Square Enix title that has support for the DX 12 API, the new episodic Hitman title actually surprised us with its performance on the DX 12 benchmarks. Despite the registering of relatively high average frame rates when running the benchmark, the game actually showed signs of struggling in parts of the benchmark, and more often than not, model textures were having a hard time keeping up with the API. 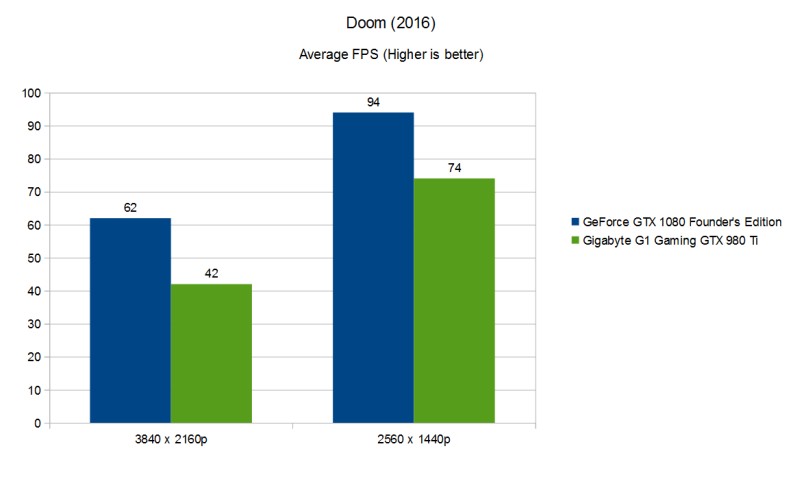 This game was literally just released the day before this review was supposed to go live, and as you may have seen in a post by NVIDIA, the GTX 1080 literally had no problem playing this game on both 4K resolution and 1,440p resolution. At 4K, we were getting average frame rates of 62 fps, with maximum frame rates already entering well pass the 85 fps mark at one point.

Rise of the Tomb Raider Rise of the Tomb Raider is a game which jaw-dropping graphics and real-time features that can seriously cause your system to lag if your GPU isn’t up to par. That being said, the GTX 1080 definitely showed no signs of a struggle, as it maintained a steady frame rate on both 4K and 1,440p resolutions. Despite having been released two years ago, Dragon Age: Inquisition is still one of the most graphically demanding titles on PC. At 4K, we could almost hear the GTX 1080 screaming as it struggled to hold an average framerate of 45 fps. Of course, the minute we dropped the resolution down to 1,440p, that number doubled. While not as demanding as the other titles The Witcher 3: Wild Hunt is still a very pretty game that still has a relatively high graphical demand. Even at 4K, the GTX 1080 was averaging out at 45 fps. 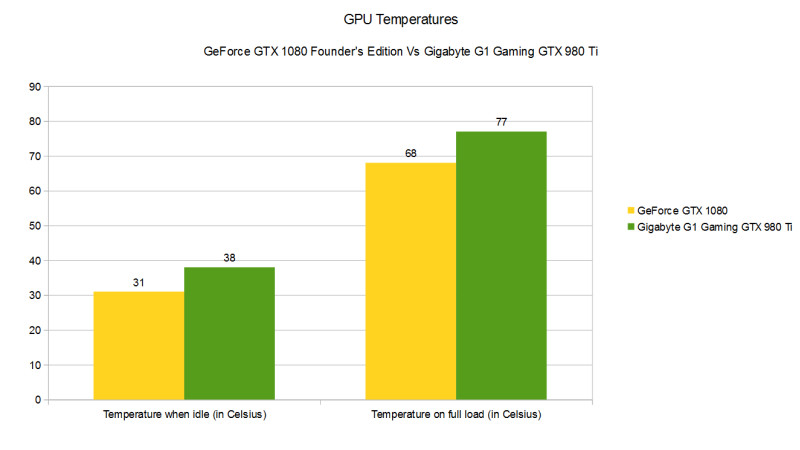 The power draw of the GTX 1080 really and genuinely is nothing short of impressive. Despite only being air cooled, NVIDIA’s 180W TDP really rang through with the card. With just a single 8-PIN PCIe port, the card idled at 80W and on a full load, the numbers never went past the 280W mark. Even more impressive is the fact that the card was consistently hitting idle temperatures of 31 degrees Celsius, and a maximum of 68 degrees Celsius at full load.

As far as single GPU flagship cards go, the GeForce GTX 1080 is a card that’s in a world of its own. It’s quite obvious that NVIDIA has made good on its promise of creating a card with improved power efficiency without sacrificing its performance.

Compared to our G1 Gaming GTX 980 Ti that we used, it’s clear that the GTX 1080 had a few hits and (near) misses in certain titles and benchmarks. Speaking of benchmarks: our only peeve with the card was that despite the massive headroom we had with overclocking, the performance numbers on 3DMark’s Fire Strike benchmark suites barely showed any major increment.

On the plus side, overclocking the card was simple and a dream. By the time we were done with overclocking this Pascal-powered wonder, we had pushed the card’s core and memory clockspeed nearly 25 percent past its factory clockspeeds. But what is exceedingly impressive is that, despite all that overclocking and the single 8-PIN PCIe port, the card still managed to hold its own with game running at 4K resolutions.

Back in our GeForce GTX 980 Ti review, we said that NVIDIA was betting on DX 12, 4K and VR. We harken back to that statement and add this statement: Where the GeForce GTX 980 Ti was the initial bet into the VR game, the GTX 1080 would very well be one of NVIDIA’s trump card in helping them pull ahead in the race.