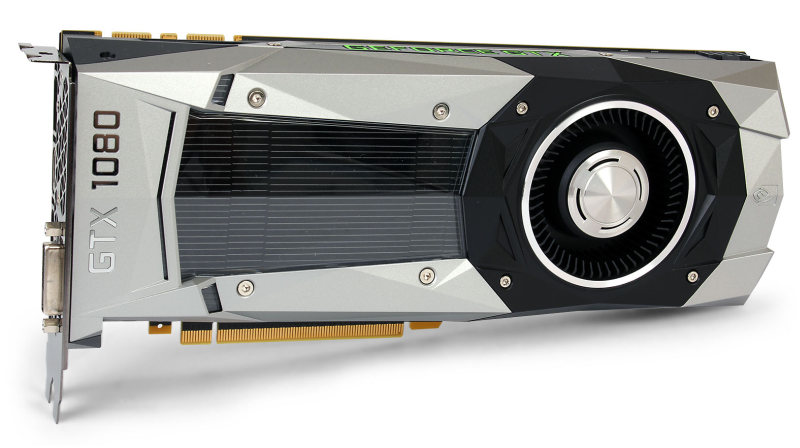 After a bittersweet ending for our writer at the GTC 2016 (he was almost in tears, that man) with Jen-Hsun Huang, CEO of NVIDIA, only announcing his company’s new and refreshed initiative of entering the realm of Virtual Reality (VR) and the availability of the new Tesla-powered P100, any and all rumors that NVIDIA would announce and unveil a new consumer-level GeForce graphics card was squashed.

But all was forgiven the day that NVIDIA flew us out to Texas and allowed us to watch their new king of gaming be unveiled: the GeForce GTX 1080 (they also announced the GeForce GTX 1070, but that’s a story for another day).

As with all GeForce cards, the GTX 1080 is covered with the company’s trademark grey shroud that’s been used on several of their major flagship GeForce cards in the past. There is, however, a distinction between the GTX 1080’s cooler shroud, and the cooler shrouds of yore: its design actually pays homage to the humble polygon, and quite frankly, it’s a relatively decent facelift from the old school design. 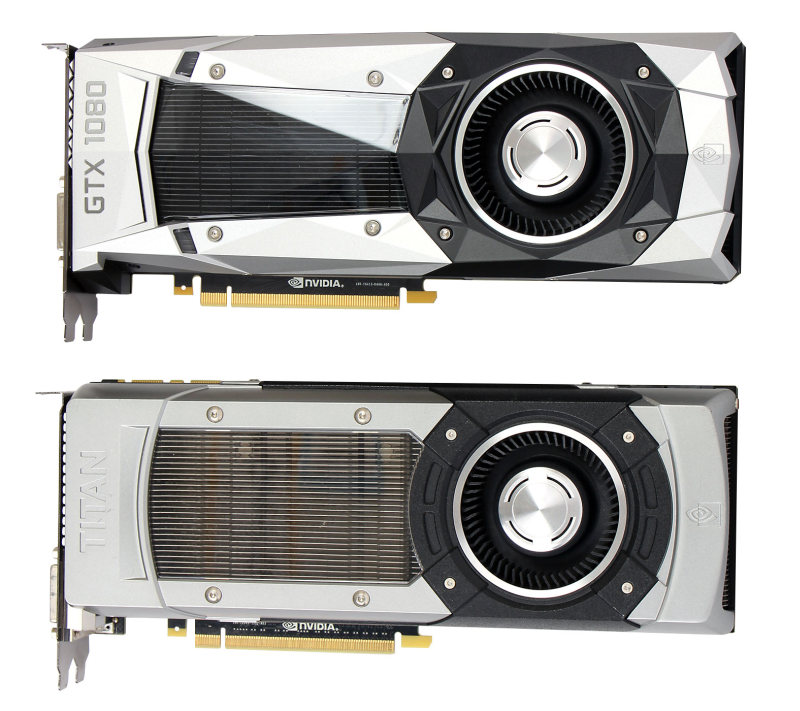 A backplate with the NVIDIA’s moniker and card title emblazoned on it adds a nice and distinguished touch to the card’s overall aesthetics, while reinforcing the card and (obviously) improving the card’s heat dissipation for a more sustained, overall performance. 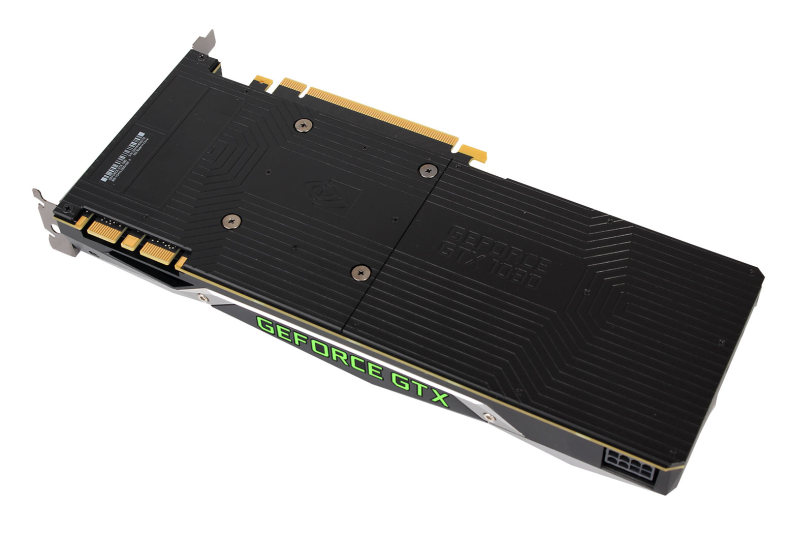 But the cooler cover isn’t the main meal of this review, and what we’re really gushing over is the company’s new GP104 Pascal GPU. NVIDIA purports that, despite not being the new HBM2 memory format, its new GPU architecture would still run rings around the TITAN X and the GTX 980 Ti, with the latter in a 2-way SLI. 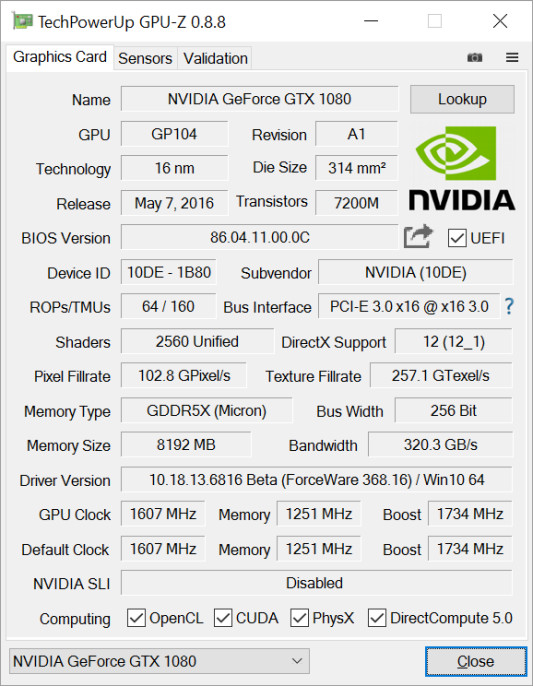 Rather than HBM2, the GTX 1080 comes with 8GB of GDDR5X memory, which is practically an improved (or rather, heavily modified) version of the already dated GDDR5 memory format that’s still used in all of today’s current cards. It’s not just a new memory format either: the Pascal GPU architecture is also based off a smaller, thinner, and more improved 16nm process die. The end result is a graphics card that’s powerful, and yet still power efficient (more on the card’s performance in the next page).

Helping the new memory format along is a 256-bit memory bus, as well as a record-breaking memory clockspeed of 10,000MHz, which completely overshadows the majority of previous generation graphics cards (AMD’s cards included).

As a reiteration and summary of the GTX 1080’s hardware, the card is based off NVIDIA’s new GP104 Pascal architecture, which in turn is made of from a new 16nm FinFET process die. Much like the TITAN X and the GTX 980 Ti, the card fits 8 billion transistors and 2,560 CUDA cores, which is significantly less CUDA cores than its predecessors. But don’t let that decrease in core numbers fool you.

Despite having less CUDA cores, NVIDIA has successfully managed to stabilize the GTX 1080’s core base clock speed at a massive 1,607MHz, with a boost clock speed of 1,733MHz: a little more than 60 percent of the original 1,000MHz core clock speed of the original TITAN X and GTX 980 Ti. Even more amazing is the fact that the card is able to dish out more than nine teraflops of compute performance: a number that NVIDIA says is far more than a single TITAN X or GTX 980 Ti in 2-way SLI mode.

Besides the awe-inspiring and drool-worthy numbers, the GTX 1080 sports these numbers for a very simple reason: VR Gaming.

Love it or leave it, VR gaming is set to be a big thing starting from this year, and considering the asking requirements of both the Oculus Rift and the HTC Vive, it’s not wrong to say that NVIDIA is merely practicing the art of future-proofing themselves for the medium with what is the currently the world’s most powerful consumer grade graphics card (at least, until NVIDIA announces and releases the GTX 1080 Ti).

If you're not into VR gaming, the GTX 1080 is still a superb card for gaming on a multi-monitor set up. In fact, NVIDIA has included a new feature called Simultaneous Multi-Projection, or SMP.

What is SMP? To explain, we’ll let Tom Petersen, one of the top engineers at NVIDIA, give you the down low on how SMP works in the video below.

As with the TITAN X and the GTX 980 Ti, the GTX 1080 is fitted with three full-sized DisplayPorts, one HDMI port, and one dual-link DVI port. Naturally, the card supports anti-tearing and refresh rate technology, G-SYNC as well. 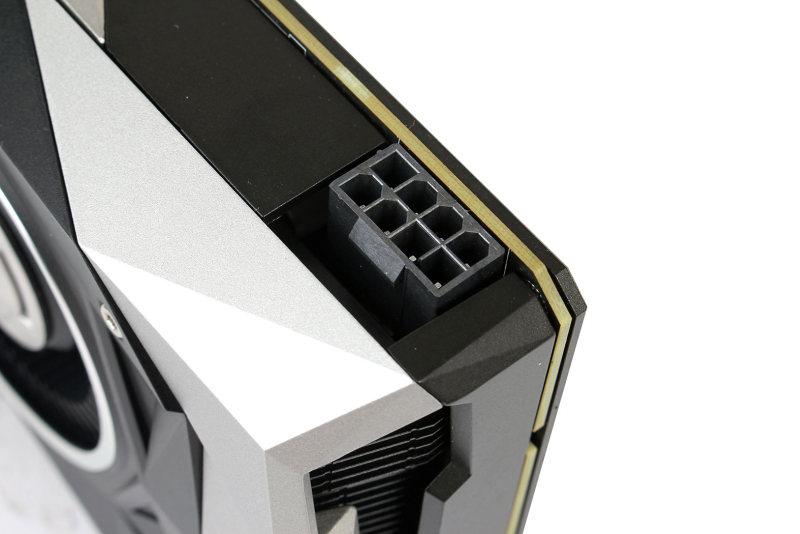 One more amazing thing about this card that we should point out before we get to the benchmarks is the card’s overall Thermal Power Draw (TDP). The Pascal architecture is so efficient that the card’s TDP is rated at 180W, but more impressive is the fact that unlike the previous generations, the GTX 1080 only requires a single 8-PIN PCIe power port. And mind you, this is a card that is designed to run games at 4K resolution.