MSI GS63VR: Something Subtle, Yet Powerful The world of PC gaming can pretty much be summed up into two categories. On one hand, there’s the desktop PC gamers, and within that group, there are several different users that range from the game-ready PC gamer, all the way to the hardcore, enthusiast-level PC gamer (e.g. multi-GPU setups, triple 4K displays, etc.).

On the other side of the spectrum, you have the notebook gamers: gamers who want to play their favorite triple-A titles, but unlike desktop PC gamers, they also want the ability to bring their machine around, without the bulk.

But, as you all well know about gaming notebooks, finding a notebook that has battery stamina as good as its performance in games was always an elusive factor. That factor, however, changed dramatically when NVIDIA launched its new GeForce GTX 10-series GPUs for notebooks not too long ago.

Completely dropping the ‘M’ moniker from the back of its mobile graphics cards, the new Pascal GPU architecture now provides notebook manufacturers like MSI with the means to come up with ultra-portable gaming notebooks like the GS63VR, a notebook that we think could very well defy the status quo of all gaming notebooks.

So, as a member of the GS series, the GS63VR pretty much follows the same basic rules of the series: it’s got a slim form factor design (though not as slim as the Razer Blade or Razer Blade Stealth), and on top of that, the notebook's weight of 1.8kg makes it light enough to be lugged around without weighing you down.

Honestly though, we’re actually glad that MSI didn’t make the GS63VR any thinner than it already is. There is a problem with most thin and slim form-factor notebooks these days, and that problem is the lack of ports. The thinner these machines get, the less ports the manufacturers are able to put on their notebooks, and that usually leads to them having to provide a specially-designed port hub that can be used to extend out of one (or two) of the limited ports on these machines.

Here’s another impressive feature: the GS63VR’s entire chassis is constructed out of a special magnesium-lithium alloy. The end result is a notebook that’s lighter than 3kg, and a body that’s extremely durable, as well as a display frame that barely even flexes.

We don’t know if it’s just an added touch of luxury, but the bottom of the notebook is layered with a sort of velvet material. Our guess is that it is there to further alleviate any heat generated from the notebook. That brings us to the next subject of the notebook: ventilation and system cooling. MSI has really thought hard about ensuring that the onboard Intel 'Skylake' CPU and NVIDIA GeForce GTX 1060 works at its best, and to that end, the GS63VR literally has exhaust vents all over the notebook.

The top one-third of the notebook’s bottom is fitted with vents (the remaining two-third is covered in the velvet material), and there are vents located on both sides of the notebook. Naturally, the back of the GS63VR is fitted with stylish vents, with the word ‘Stealth’ emblazoned smack dab in the middle of it. And if you think that the notebook doesn’t have enough vents, think again. Right at the top of the machine’s keyboard, you’ll notice that there’s a sort of machine-drilled grill. Initially, we thought that it was where MSI had placed the speakers, but no, that’s actually another ventilation grill.

With the GS63VR, however, you actually get all the port trimmings, which include three USB 3.0 ports, an SD card slot, and (surprisingly) an RJ45 LAN port on the left side, along with a Nahimic 2 audio and microphone jack.

The right side of the GS63VR is actually where the design of this gorgeous-looking notebook starts to get a little interesting. The port where you connect the device’s accompanying power brick is situated not at the top corner of the notebook (like all notebook power ports should be), but somewhere closer to the middle. Throwing itself into the fray is a Mini-DisplayPort 1.2, an HDMI port, a USB Type-C port, and (for some unexplained reason) a USB 2.0 port.

But it doesn’t end there. Upon first glance and the first opening of the notebook, the GS63VR’s power button isn’t located anywhere on the main slate. Instead, MSI had placed the power button right at the edge (the edge towards you, specifically) of the same side as the power port and other display outputs. Why MSI decided to do this is beyond us, and its placement is rather bittersweet.

On one hand, its out-of-sight placement just adds to the GS63VR’s already sleek and minimalist design, but on the more physical aspect of it, accidentally powering off the notebook when we just wanted to move the notebook either a little closer or away from us had (and there’s no easy way of saying this) frustrated us to no end. Seriously: we were accidentally turning off the notebook while doing simple tasks such as typing out this review and even worse (and this really hurts the most), while running one of our games.

On that note, the LED I/O symbol in the middle of the notebook’s base is a nice touch, and serves to let you know that the notebook is powered on or gone into sleep mode.

Moving on, the GS63VR is fitted with a 15.6-inch Full HD display with a refresh rate that’s locked at 60Hz (sorry guys, it’s not 120Hz). Mind you, it isn’t a G-SYNC display either, but considering the power that this lightweight machine can do, it’s really a very small price to pay. But more on the performance numbers later. The GS63VR’s keyboard is a full-sized, backlit chiclet keyboard, courtesy of SteelSeries. As is the trend with all PC components these days, the backlit keyboard is fitted with RGB LEDs, so you can bet that the keyboard can be programmed to glow all the colors of the rainbows, and in different patterns to boot. Programming and choosing the colors is simple, thanks to the SteelSeries Engine 3 utility. Of course, if you’re feeling a bit lazy about doing that, there are a couple of preloaded modes that come with the program, such as static mode, breathing mode, or a wave mode.

Audio-wise, the GS63VR’s speakers and woofers are located just at the edges of the notebook near the bottom of the machine. The audio quality of the speakers aren’t actually too bad, and bordered on the line of impressive, if not for the fact that its audio placement wasn’t very accurate (then again, these are notebook speakers, so we can’t fault them too much, and that the highs and mids are audibly more powerful than the bass. Plug in a pair of earphones or headset, and it’s actually a slightly different story, and that’s all thanks to the built-in Sabre HiFi DAC and MSI’s Nahimic Engine 2. Beyond PC games, every song and video that we watched and listened to sounded exceptionally clear. Audio placement was spot on, and the balance between the highs, mids, and lows was impressive, with nary a distortion or audio break in the tones. As you could with any sound card, the Nahimic Engine 2 could also be tweaked via the pre-installed Nahimic 2 software.

The overall gaming audio experience wasn’t really as sublime, however, and was more of a bittersweet experience. During several occasions, we noticed the audio engine bugging out on us, which caused the audio to becoming choppy over time. If you’ve never experience a sound card chopping up your audio experience, believe us when we tell you that it’s actually very irritating. Eventually, we actually narrowed down the problem to the root of it all: the Nahimic Engine 2 system itself.

Now, before you jump to conclusions, we did manage to fix the choppy audio problem after updating both the Realtek and Nahimic Engine 2 with the latest drivers. Once updated, this problem ceased to exist.

Last but not least, this notebook also has a pretty basic 720p webcam. That being said, let’s be honest here: you’re not going to be spending RM9,000 for a gaming notebook just so you could see your pixelated face and talk to someone else over Skype.

So, with the GS63VR’s design and aesthetics out of the way, let’s get right down to laying bare what’s exactly MSI has packed into the machine. 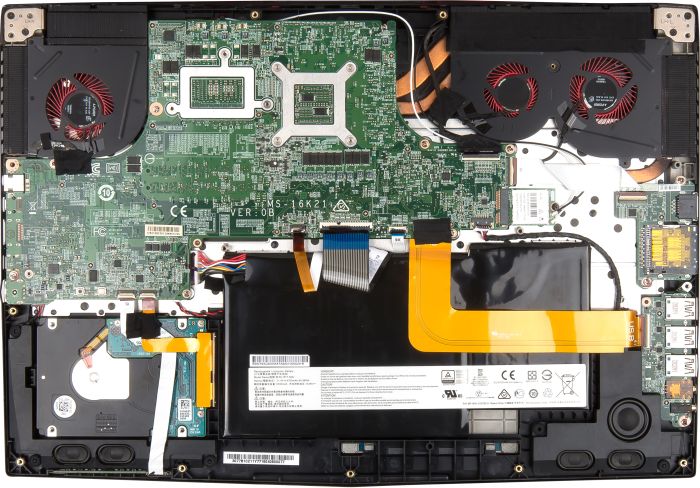 To kick things off, the CPU inside this machine is using Intel’s Core i7-6700HQ 'Skylake' CPU, which has been clocked at 2.6GHz. Helping it along, MSI has provided not 8GB, but 16GB of DDR4 RAM, and can be expanded even further to a maximum of 32GB. For storage, the GS63VR is fitted with a combination of a 128GB M.2 SSD (but it’s also NVMe compliant) and a 1TB HDD rated at 5,400 rpm. The HDD’s speed is a bit of a sore point for us, as the lower speed obviously contributes to longer loading time for games and apps. Our friends at MSI Malaysia was apologetic about this, but it seems like it was a decision from the upper echelons of MSI.

The most important component of the GS63VR (the heart of the dragon as it were), of course, is the GPU that it houses: a full-on desktop-grade GeForce GTX 1060 from none other than NVIDIA. For those of you in the void: not too long ago, NVIDIA officially announced that it would be dropping the ‘M’ moniker from the back of its notebook-grade discrete GPUs, on account that the new Pascal GPU architecture can now be applied to both the desktop and notebook categories.

As we proved in our review of the GeForce GTX 1060, the card is already a brilliant card to begin with: it has absolutely no trouble running all of our triple-A game titles at their maximum settings at Full HD, and as an added bonus, it didn’t even break a sweat running some of the titles at 1,440p resolution.

To cool things down in the machine, the GS63VR utilizes MSI’s Cooler Boost Trinity fan system. The system is pretty effective, but as is with all gaming notebooks, these fans tend to get significant louder once your components work at full load, so don’t start expecting a ‘silent but deadly’ sort of performance with this notebook.

Write a Review
Compare This | Specifications
Slim form factor
Lightweight
Runs triple-A titles at maximum graphics settings on Full HD
Onboard GeForce GTX 1060 GPU can be overclocked
HDD only spins at 5,400rpm
Awkward placement of the Power button
Notebook is loud whenever working at full capacity