At just 2.15kg, the Dyson V8 Slim is its lightest vacuum cleaner yet
Product Listing
AppleASUSFitbitLGMotorolaPebbleSamsungSonyXiaomi 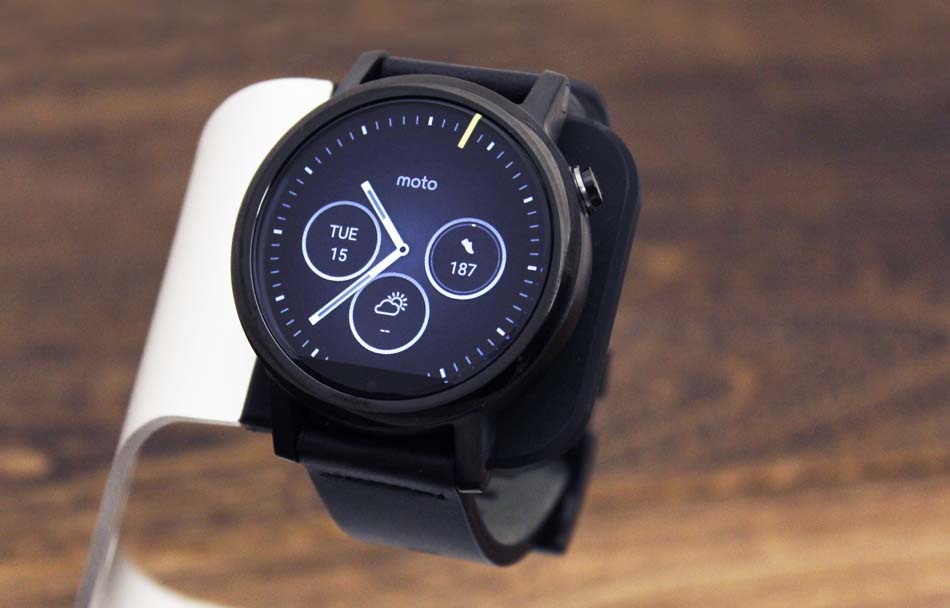 The original Motorola Moto 360 was one of our favorite smartwatches of last year. With its minimalist round design, and stainless steel and glass build, it was one of the few smartwatches that didn’t make you look like a total nerd. This year, there's a new Motorola 360. It comes in two sizes, it has an updated design and a it's got a few internal upgrades too. But it's also gotten a steep price hike. Is it worth shelling out the extra cash for the latest model? Let's find out.

The Moto 360 (2015) now comes in two sizes (and three editions): a black 42mm model, a rose gold 42mm 'ladies' edition, and a silver 46mm version (the same size as last year's). All three versions are made from stainless steel. For this review, we have the 42mm black version. 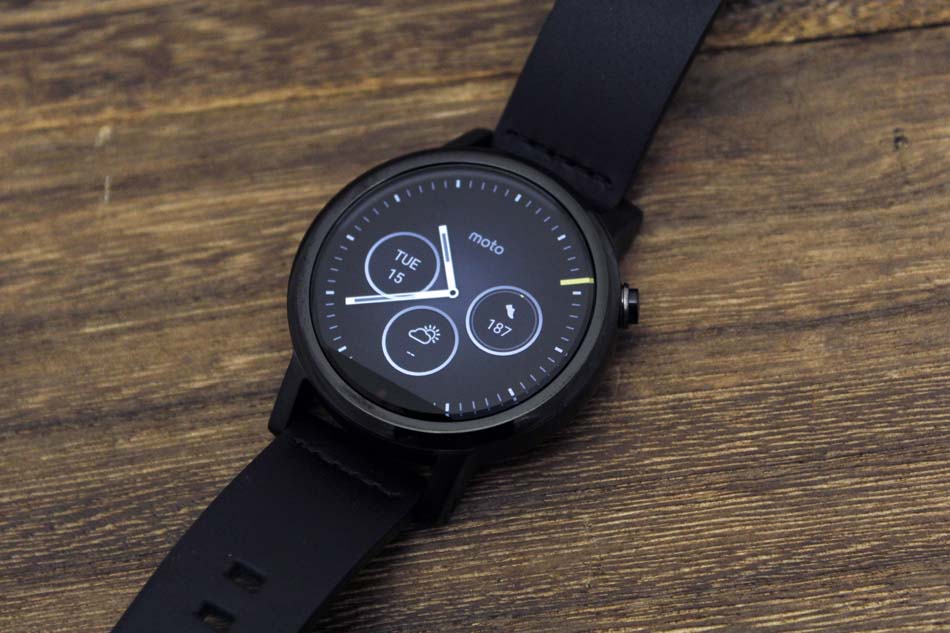 Whichever version you opt for, they're all expensive, coming in at about RM1,469 (42mm black), RM1,531 (42mm rose gold), and RM1,684 (46mm silver) respectively. In the US there are more options. For example, you can get a 46mm black version with a black stainless steel link bracelet. If you buy direct through the Moto Maker store, you can even create your own custom version. There are options for a contrasting color bezel or a knurled bezel (a bargain at just US$20 more). Unfortunately none of those options will be making their way over here. 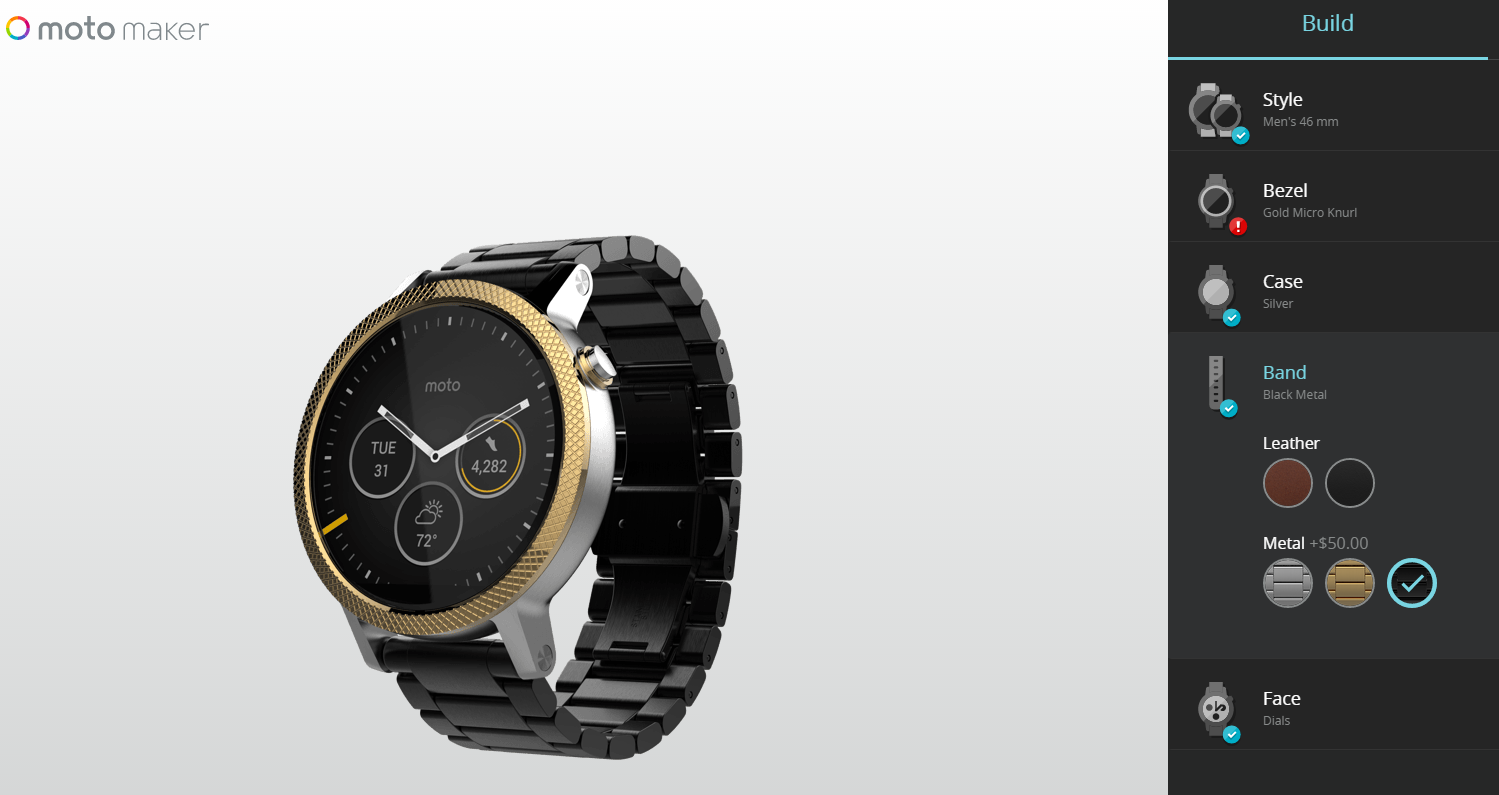 The new model looks basically the same as last year with a chunky round case, which looks fine on the larger 46mm version, and okay on the black 42mm version (black is slimming right?) but a bit too thick for the 'ladies' 42mm rose gold version.

Like last year's Moto 360, the display is actually slightly raised up from its stainless steel casing, with an angled bevel on the edge. This is to make swiping the watch face easier, but it also causes some weird distortion towards the edge of the watch face. 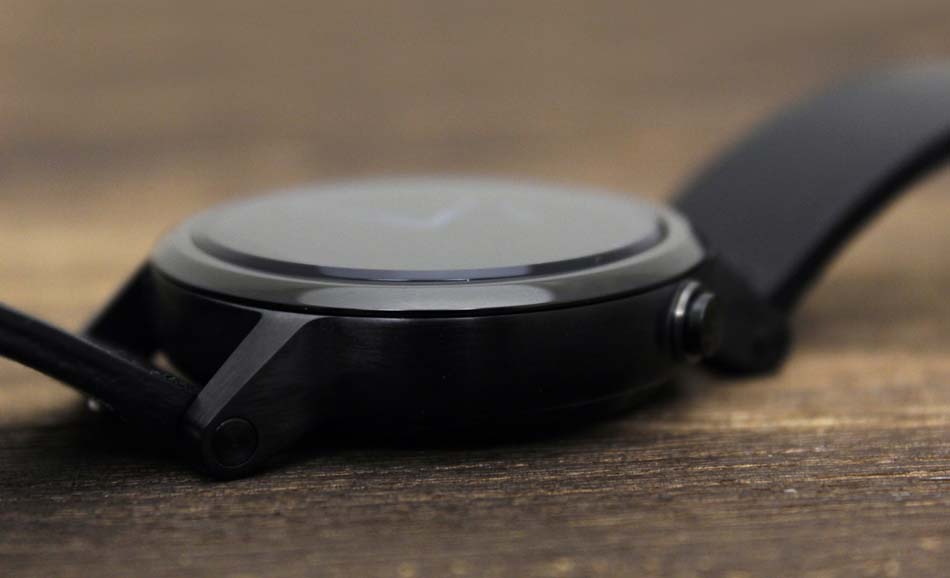 The new Moto 360 now has lugs on the top and bottom that make it look more like a watch than last year's disc-on-a-strap style, but also less unique. All three versions come with Chicago-sourced Horween leather straps with quick-detach pins: the black one has a 20mm black strap, the rose gold has an 18mm pink strap Motorola is calling 'blush' and the silver has a nice 22mm 'Cognac' brown strap. Unlike last year's Moto 360, the presence of lugs means that you can replace the strap with any regular watch strap (just make sure you choose the correct width). 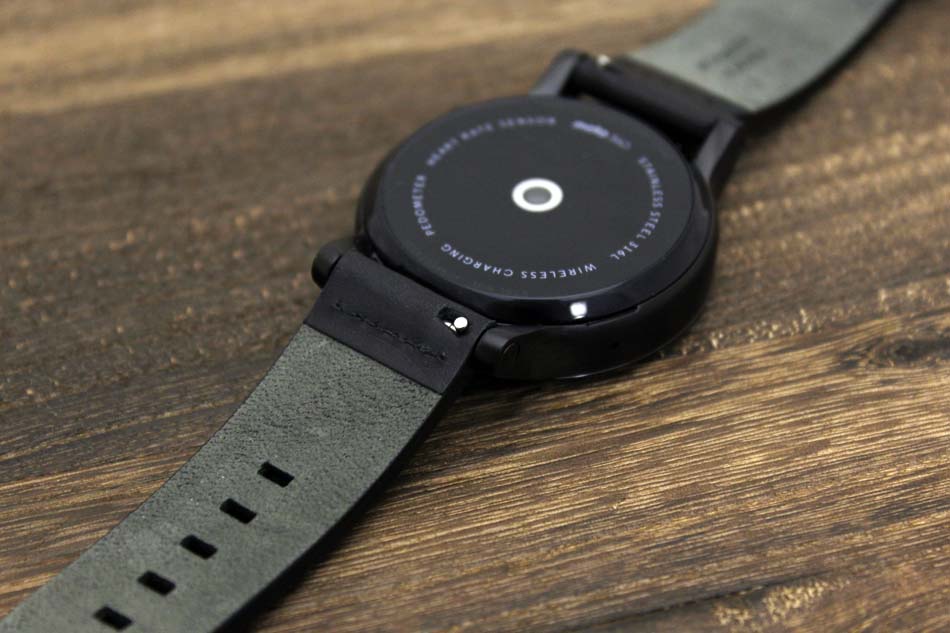 The other minor change is that the side button has been moved up from the 3 O'Clock position to the 2 O'Clock position, which doesn't really change anything (it's not like the old position was hard to reach or anything). It's still not a real watch crown either. Unlike the Apple Watch, it doesn't rotate, so you can't use it to scroll through apps: it only dims the display and accesses the app menu.

The 42mm Moto 360 uses a 1.37-inch display with a 360 x 325 pixels resolution (263ppi), while the 46mm model has a 1.56-inch display with a 360 x 330 pixels resolution (233ppi). That's a slight improvement from last year's  Both displays look decent enough, but aren't as bright or contrasty as the AMOLED displays on the ASUS ZenWatch 2, Huawei Watch or Samsung Gear S2. As a result, legibility, especially under bright light, just isn't as good. For what it's worth, those other watches all have higher resolutions too. That's not to say the new model hasn't improved the screen resolution; it has but it's just not as drastic of an increase. For comparison, last year's 1.56-inch display has a resolution of 320 x 290 pixels (205ppi).

Like last year's model, the Moto 360's display isn't a complete circle like the Huawei Watch or Samsung Gear S2 - there's a black bar at the bottom of the screen. The bar, which many Moto 360 users refer to as the "flat tire" is where the ambient light sensor is housed. This light sensor lets the display have an always-on mode that automatically adjusts the display brightness according to your surroundings. It sounds convenient, but in our opinion, it's not worth the cost of cutting out a portion of the screen. Furthermore, we found the auto brightness to be a little slow to adjust and it generally sets a lower brightness level than what we consider optimal. Also, why waste battery life unnecessarily?

Motorola claims that the ambient light 'flat tire' is necessary, but since every other round smartwatch out there doesn't include it, we really don't think it is. Like last year, the tire is a real eyesore on light-colored watch faces and pretty much makes any non-black watch face look bad. 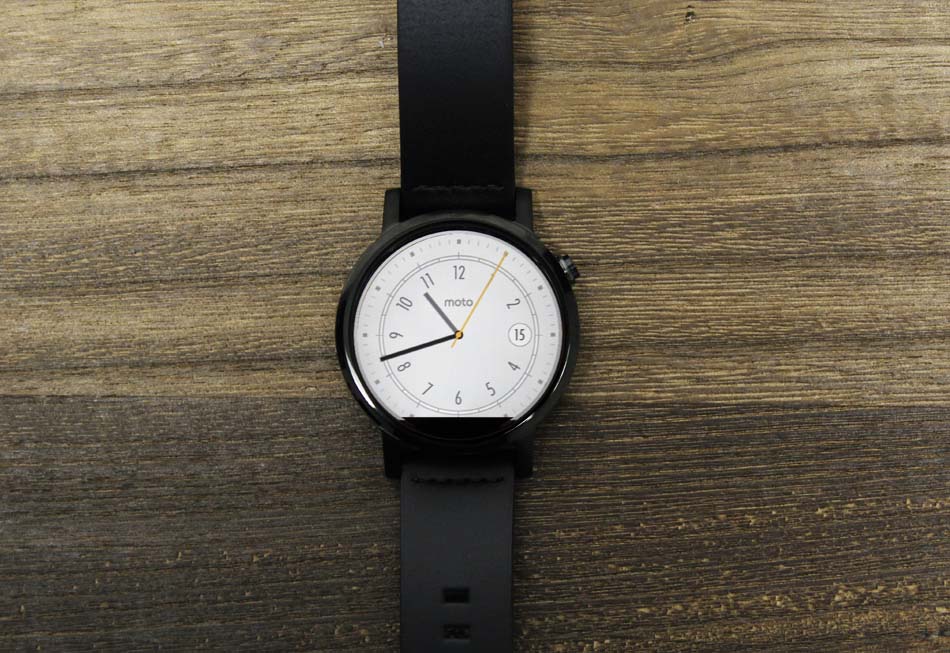 As expected, the Moto 360 runs on Android Wear (which is now also compatible with iOS, albeit with limited functionality). Unlike Android OS for smartphones, Android Wear is identical across all smartwatches, so Motorola doesn't have the same advantage of 'stock Android' that its phones enjoy.

To add some differentiation, Motorola has included some exclusive new watch faces that add a few features. The new faces have tappable widgets that can display weather, step count, battery, day / date, and more. Tap one of the widgets and you can get more information such as a four-day forecast or an agenda of your appointments. Having said that, these watch faces have also been added to the older Moto 360 via software updates, so functionally, the watch is no different from the older one. 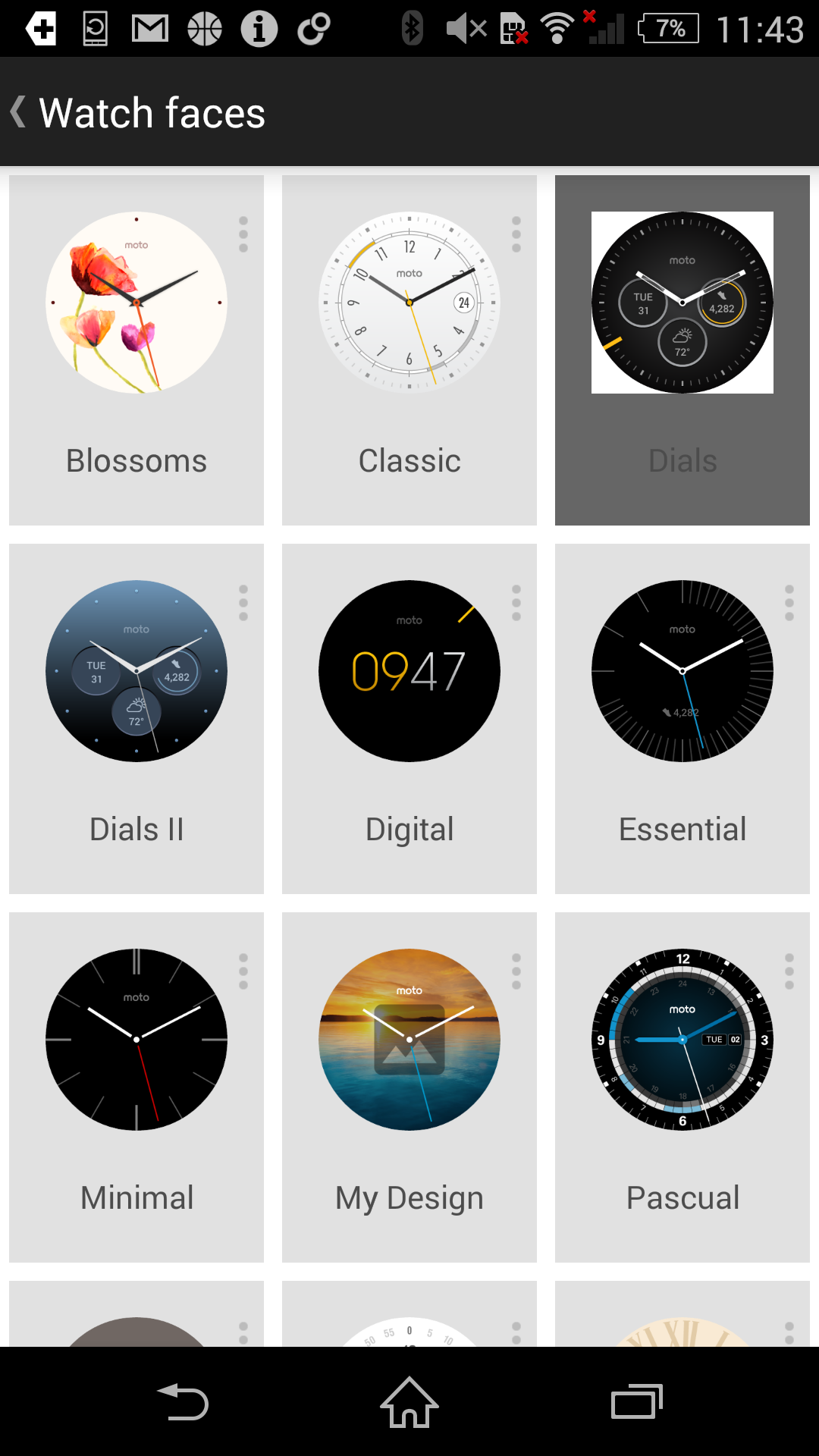 Motorola has also upgraded the fitness-tracking features in the Moto 360. It can now count your steps, read your heart rate, and estimate your calorie burn. There's also a dedicated smartphone companion app called Moto Body to help you track your progress. The app helps you track your activity and sends you motivational reminders, progress updates and updated goals based on how active you are. Unfortunately, it's still quite basic and probably won't replace your third-party fitness app. The app is only available for Android, so iOS users are stuck with tracking their fitness on the watch itself. 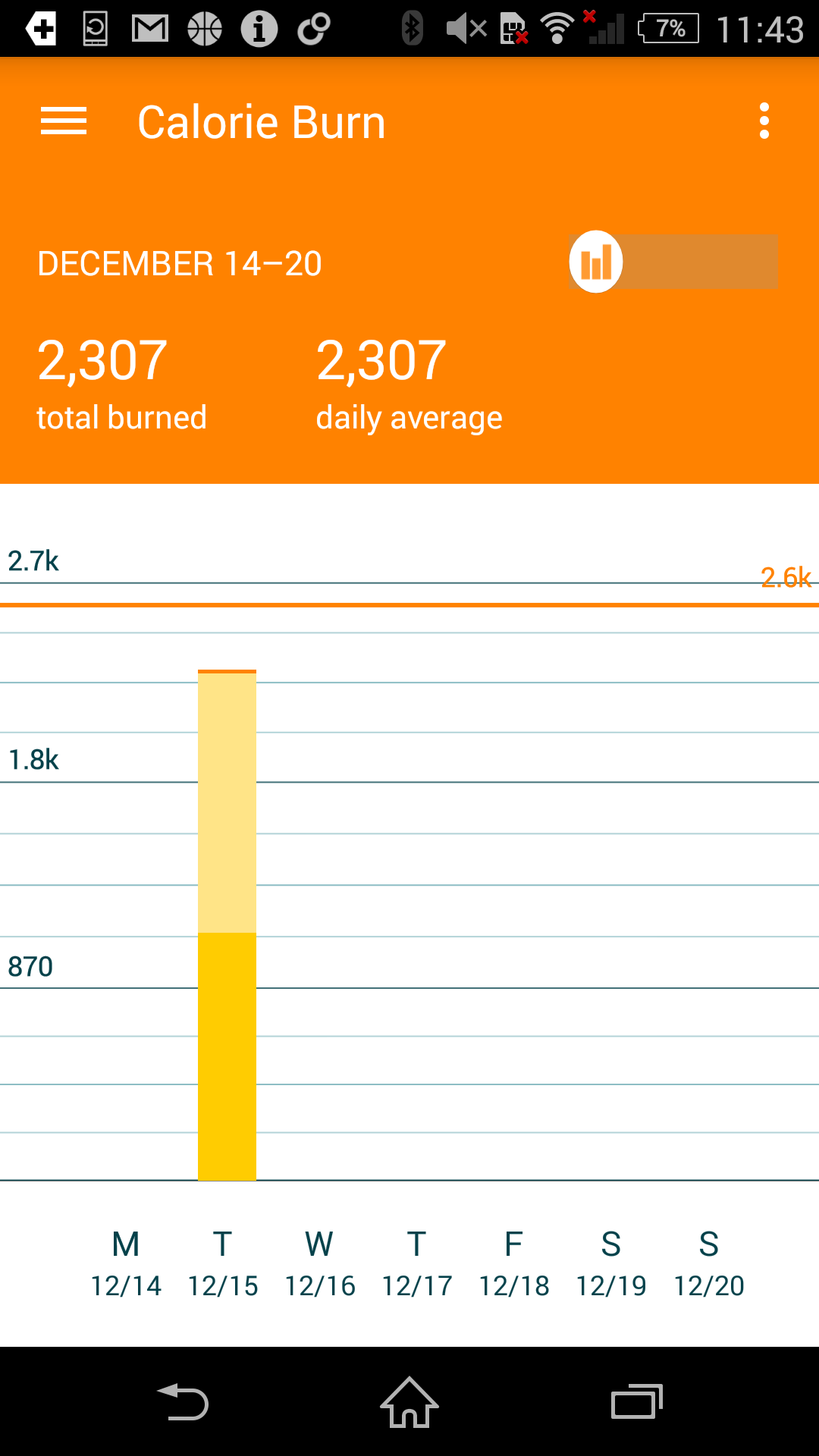 The Moto 360 has been upgraded internally, but only to catch it up to the specs of other Android Wear smartwatches. That means you get the standard 1.2GHz quad-core Snapdragon 400 processor, 512MB of RAM and 4GB of internal storage for apps and music. While this is a nice improvement over last year's plodding Texas Instruments OMAP 3 processor, it doesn't give the new Moto 360 any advantage over the competition.

As for battery life, the 42mm Moto 360 has a 300mAh capacity battery, while the 46mm version has a 400mAh battery. On our 42mm version, the watch lasted about 15 hours of moderate usage before needing a recharge. When you do need to charge the watch, it sits in a simple wireless charging dock that automatically displays a nightstand clock mode when charging.

Honestly, battery life on the Moto 360 isn't the best, and we suspect this is due to the always-on LCD display. Most smartwatches use more power efficient OLED and AMOLED displays. By the way, the first generation charging dock is incompatible with this year's model, and vice versa. 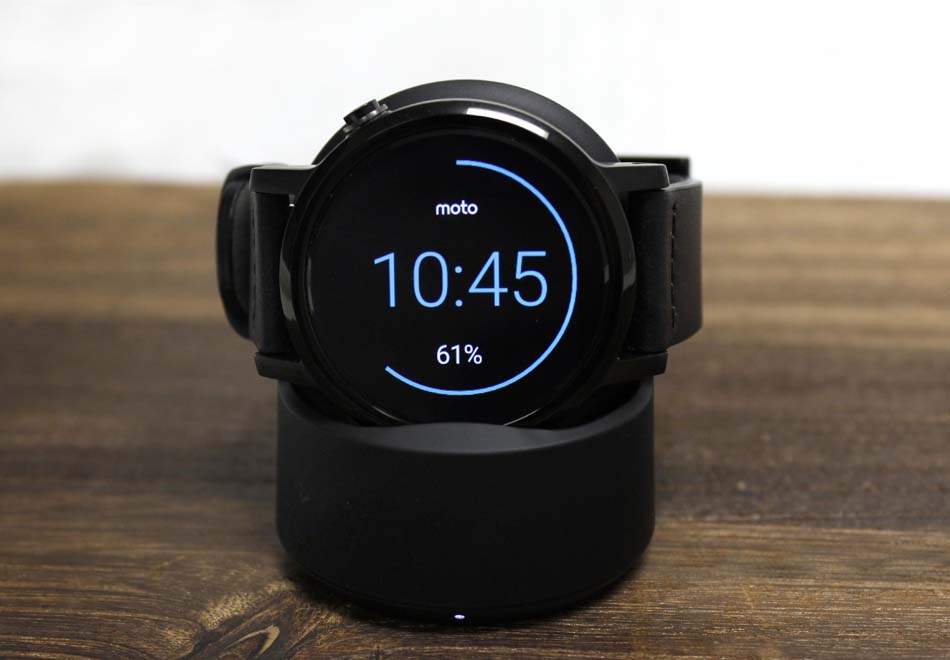 We loved the original Moto 360 for its stylish, stand-out design, but now that there are a ton of similar round-faced smartwatches out there, the 2015 model doesn't have quite the same appeal. Don't get us wrong, it's still a gorgeous watch, but the competition has since beefed up, and are offering more tempting products than the new Moto 360. 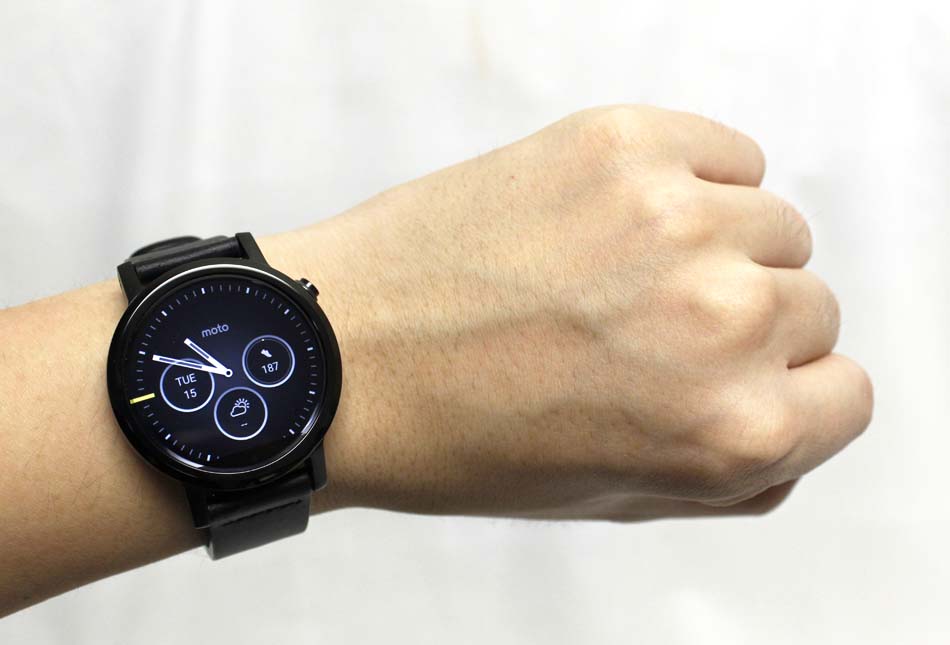 For a watch that sells itself on its minimalist design, the flat tire spot on the display is really distracting - especially when you compare it to other round smartwatches and their perfectly circular displays. The LCD display is also not as bright or contrasty as the OLED and AMOLED smartwatches out there, which makes it harder to read in bright sunlight and also gives the Moto 360 inferior battery life.

Finally, the Moto 360 (2015) is really expensive. The original sold here for about RM800, which we would say is just about right for what it offers. With the 2015 version starting at about RM1,469, without offering much more than the original, there's no real compelling reason to seek out the latest version. If you really like the look of the Moto 360, honestly, we recommend just looking for a good deal on the original, you won't be missing out on much.

And while the new Moto 360 looks like decent value compared to the likes of the Huawei Watch, if you're looking for alternatives, there are better options out there for less money. The Samsung Gear S2 is a much better round smartwatch, and then there's the ASUS ZenWatch 2, which has a nicer AMOLED display and also comes with a lot more functionality on top of Android Wear thanks to ASUS' ZenWatch Manager app.

Write a Review
Compare This | Specifications
Gorgeous metal and glass design, now available in 2 case sizes
Watch lugs now take standard watch straps
LCD display not as bright or contrasty as OLED and AMOLED smartwatches
Battery life could be better
Ambient light sensor cuts off part of the screen
Not that much better than last year's Moto 360
A lot more expensive than last year's Moto 360