Linksys EA8500 Max-Stream AC2600: Bringing speeds of the future before it arrives

Linksys EA8500 Max-Stream AC2600: Bringing speeds of the future before it arrives

Whenever a new wireless standard appears, Wi-Fi routers will almost always be the first to adopt them. Just like when the 802.11ac wireless standard was new, wireless routers appear to be ahead of their time, adopting the new standard way before many of the devices that will be connected to them. The same story goes with what is known as 802.11ac Wave 2; routers supporting this new standard have begun appearing in the market, and are just waiting for smartphones, tablets, notebooks and other devices supporting the standard to show up. One such router that is waiting in line is the Linksys EA8500 Max-Stream AC2600 router. As far as wireless routers go, the EA8500 looks much like any other wireless router. It’s got four screw-on detachable antennas, a mostly flat, rectangular body, five RJ45 ports – four for LAN and one for WAN – a USB 3.0 port and a USB 2.0/eSATA combo port. There are a pair of lights for each RJ45 port, one that stays on when a cable is plugged in, and another that flashes when there’s data traffic going through. This is probably because there is one thing out of the ordinary on this router, and it’s the lack of an array of status LEDs up front. The only one present takes the shape and form of the Linksys branding, which flashes or stays solidly on depending on the Internet connection. In the inside, the EA8500 packs something few others do for now, and that’s the 802.11ac Wave 2 wireless standard. Or Multi-User, Multi-Input Multi-Output (MU-MIMO). Or simply the fact that you can have as many devices connected to it and yet each device will experience smooth data traffic without the expected congestion. This is because instead of serving data to one connected device at a time as most routers do, the MU-MIMO tech allows it to serve multiple devices simultaneously, so instead of each connected device taking turns in receiving packets data – this is most observable when said multiple devices are streaming videos simultaneously, and the videos stop buffering after awhile and resuming the process later – each device gets its steady stream of data as required.

As for setting it up, it’s as simple as any other Linksys router. The interface is as clean and streamlined as ever, so you won’t be facing any problems looking for any settings you’re intending to change. 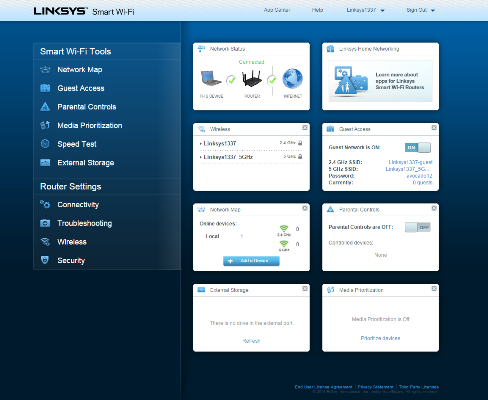 Setting up the Linksys EA8500 as a gateway between a desktop PC and a notebook PC, we had the desktop connected to the router via cable and the notebook wirelessly using an 802.11ac adapter. We then transferred 1GB worth of files to and from each of them, with the notebook at varying distances (5m, 10m and 15m) from the router. 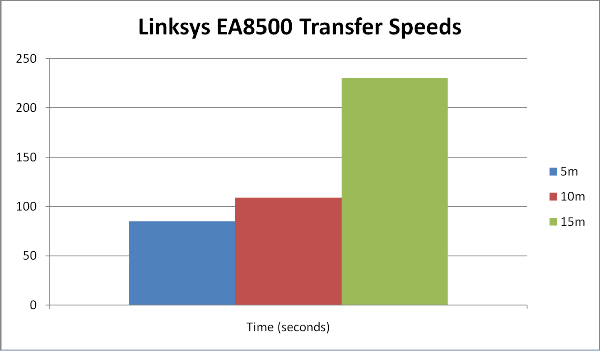 Unfortunately, we didn’t have any client device that works with MU-MIMO, and so we were unable to see if it really works as advertised. That said, our tests with a single device would suggest that you shouldn’t face any problems with the old SU-MIMO tech, assuming you can keep distance and other sources of interference under control. Speeds are also good with multiple devices (without MU-MIMO support) connected, although you will notice the slowdown after awhile.

The Linksys EA8500 Max-Stream AC2600 router, then, is a tool of the future. It’s performance with clients equipped to deal with the first wave of the 802.11ac standard was good, but not really spectacular enough to be boasted about, and that’s before extreme distance is included into the equation. At launch, the EA8500 will come bundled with the RE4000W dual-band wireless range extender with every purchase, while stocks last.

The true value of this router lies in its support of MU-MIMO. However, as there are very few client devices that supports that standard, the EA8500 doesn’t really shine too well. In the future, when newer client devices supporting MU-MIMO become more common, then we may be able to see this router outperforming the others. Until that day, the Linksys EA8500 Max-Stream AC2600 router is like any other, with some degree of future-proofing.

Write a Review
Compare This | Specifications
Support for MU-MIMO
Transfer speeds are good, even with multiple clients not supporting MU-MIMO
Lack of status LEDs make troubleshooting more troublesome than necessary
MU-MIMO will be underutilized until more devices support it
Performance drops sharply with distance