When Linksys first launched the EA8500 – the company’s first MU-MIMO router – it was considered way ahead of its time. And in a sense, it still is – only a few devices currently in the market support the tech, and it won’t be until later when mobile devices powered by the Qualcomm Snapdragon 820 SoC become more common that we’ll see MU-MIMO becoming commonplace among client devices. But of course, tech waits for no one, not even other fields in tech itself. And so, we are presented with the Linksys EA7500 Max-Stream AC1900 router. If you've expected the EA7500 to look identical to the EA8500, then you’ll not be disappointed. At first glance, the only clear difference you can see is that there are three detachable antennas instead of four, and they are all screwed in on the back. It has the same lack of status LEDs up front, and the only thing that lights up is the Linksys branding. 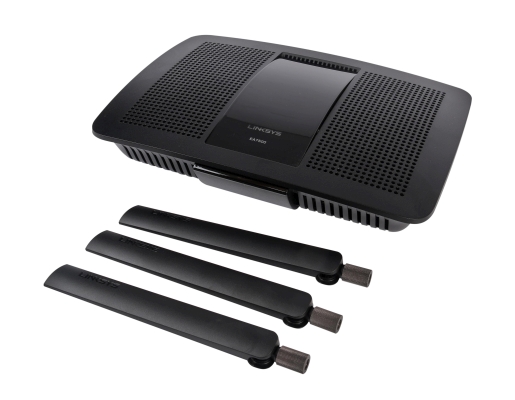 Around the back, the arrangement of the ports are slightly different, but you do get the same ports, and the same number of them - four LAN ports and one WAN port, a USB 3.0 port and a USB 2.0 port. One other difference to note here is that the last one does not double as an eSATA port. Setting up is a breeze as before. The only thing is, this time around, we were immediately prompted to give it a firmware update the moment we plugged it to a PC. From that point on, it’s the same clean and streamlined GUI as the EA8500. We plugged a USB 3.0 flash drive to the appropriate port containing our test files, and we transferred files between the drive and a notebook PC. The notebook PC is connected to the EA7500’s 5GHz band using an 802.11ac adapter. The transfer was repeated with the notebook being at varying distances from the router, specifically 5m, 10m and 15m.

Transferring 1GB worth of data (consisting of a couple of video files) took a surprisingly quick 41.6 seconds at 5m, while at 10m and 15m the transfer rates took a dip, resulting in times of one minute and 1.5 seconds, and one minute and 11.3 seconds, respectively. The Linksys EA7500 comes with a feature that merges the 2.4GHz and 5GHz bands together, so that you don’t need to deal with assigning specific devices to specific bands. It’s undoubtedly convenient, but if you’re looking for sheer speed, this isn’t necessarily a good idea.

The Linksys EA7500 Max-Stream AC1900 router is another MU-MIMO router that you can get, only this has one less 5GHz band. This would make more sense of you don’t have that many devices that you need connected to the Internet concurrently, as having that one less 5GHz band would save you a small sum of cash.

When it comes to MI-MIMO client devices, it is indeed still a rarity, but with many flagship devices beginning to use Qualcomm’s Snapdragon 820 SoC that supports MU-MIMO, and Qualcomm’s promise of rolling out features from its flagship SoCs down to its midrange 600 and 400 series SoCs in the coming years, the time when MI-MIMO actually becomes mainstream isn’t that far away anymore.

Write a Review
Compare This | Specifications
Very fast at close range
Speed remains on the high side even without MU-MIMO clients
Troubleshooting can be troublesome without status LEDs up front.