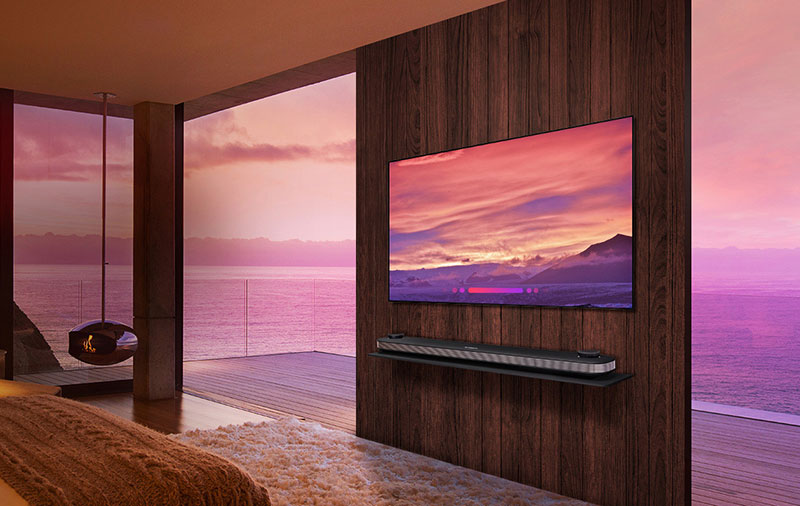 Conclusion: So, same same (as the W7) but different?

In a nutshell, LG’s strategy this year isn’t unlike last year, and that’s to compete with Samsung at the premium end of the TV market with lots of OLED models, which prices are determined not so much through feature differentiation, but design.

Without a chassis and stand that require yearly design updates, you’d be hard pressed to tell the difference between the W8 and last year’s W7. Both are equally thin, both use a proprietary cable that carries power and data, and both have this long and heavy soundbar which speakers emerge from both ends alongside a dramatic audio effect when you turn on the TV. In terms of industrial design, versus the W7, the W8 doesn't add anything more to the conversation.

The same goes for the WebOS interface. The UI is now at a state where LG is making more tiny refinements than drastic graphical changes (e.g., sleep timer shortcut in the Quick Settings menu, paintings as screensavers). If you’ve used WebOS 3.0 and 3.5, you’ll feel right at home with 4.0.

The ThinQ AI platform is the latest brand-new thing to appear on LG’s OLED TVs, but right now, it's at best offering you a glimpse of LG’s AI ambition. If you couldn't care less about speaking into the remote to control your TV or search for content, then the benefits of ThinQ AI in its current form are lost on you. That said, know that the TV can only get more clever, as Google Assistant support is supposedly coming.

On paper, the W8’s panel touts the same light output and gamut performance as its predecessor. But LG claims you still get a picture quality upgrade because the new α9 processor is better at things like noise reduction and color mapping than all the unnamed processors that came before it.

Native support for 120fps high frame rate video is arguably another big addition, but unfortunately, this is crippled by the lack of HDMI 2.1 inputs on the TV (you still get four HDMI 2.0a terminals). This means you can only enjoy HFR video if you get them from places other than HDMI sources, such as the TV’s own apps. Regardless, HFR content are almost non-existent at the moment.

All said, there's no question that the W8's picture quality is top drawer stuff. Perfect blacks, high contrast, very wide viewing angles - everything that I've said about last year's W7 still applies here. Which is another way of saying existing W7 owners shouldn't have any buyer's remorse, because you aren't missing out much.

But what about the rest of us?

The pragmatic choice: Go down the lineup

At S$11,699 for the 65-inch model and an eye-watering S$34,999 for the 77-inch model, the LG Signature W8 targets the rich. Thankfully, like last year's lineup, LG mainly differentiates its TVs through design, which means you’ll get a largely similar image performance if you opt for a model further down the range. If you don't need the bells and whistles I've listed above, this is the more sensible route that I suggest potential LG OLED TV buyers take.