It's been a long review, so we'll make it easy for you by telling you what we like or dislike about the LG LM9600. To begin with, we adore its almost bezel-free design. The HDTV's metallic frame and ingenious Ribbon Stand (which swivels) are also attractive incentives in our book. The hardware buttons on the TV look more like a throwback to the year 2009, but we can't really fault LG for not finding space for touch buttons on this 'borderless' display, can we? Besides, the TV's controls are seldom used anyway when the remote is in working order. The breakout panel for its AV ports are suitably aligned for wall-mounts, so that's another major design plus point. The glossy glass face might enhance contrast levels on the LM9600, but be reminded that it could throw back serious reflections under brighter spaces. We love the upgraded point-and-click Magic remote compared to its predecessor, and not to mention that the additional scroll-wheel is a helpful tool for navigating the web as well. It's a pity though, that we didn't get to try out its voice activation capabilities here. LG's incorporation of direct wireless features like WiDi and Wi-Fi Direct also gives the LM9600 an edge over its competitors. 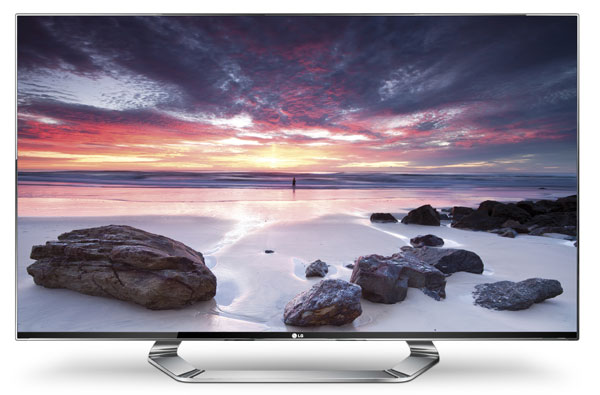 The LM9600 coasted through DisplayMate and HQV with little mishaps with the exception of its intense backlights which resulted in backlight bleeds at the corners. Thankfully, this drawback can be mitigated by enabling the display's local dimming features. We were also impressed with the TV's film processing and reconstruction of de-interlaced sources. When upscaling DVDs, we also noticed there were less motion-tearing occurrences compared to last year's LW6500 model. At the 1080p end, high-definition pictures were a pleasure to watch on the LM9600, but that's provided you know which picture enhancements to tap into. For example, Dynamic Color and TruMotion are less critical options in our opinion, while others such as Real Cinema and local dimming are essential assets in correcting the TV's visual aberrations. To top that off, we're certain AV enthusiasts would appreciate the two advanced ISF picture presets and 10-point scale too.

As for its 3D performance, we won't say LG has made a huge leap forward compared to last year's flagship LW6500 (issues like vertical banding and tight vertical viewing angles persist), but these passive 3D sets are easily one of the most eye-friendly stereoscopic displays in the industry yet. At the gaming end, we enjoyed Dual Play on the PS3 even though there were mild traces of ghosting during gameplay. Who can possibly say no to a full screen on two-player mode? Of course, it would be ideal if LG could polish up their Dual Play act further before their subsequent Cinema 3D TV releases. Compared to the Sony Bravia HX925, LG's latest passive 3D display finally has the firepower to match (and outdo in some aspects) their rivals in terms of Smart TV features, video scaling, and picture quality. Although the 55-inch LM9600 is costlier by a grand (with an SRP of nearly S$7000), we're confident that LG's stylized looks and compelling display would win more than a handful of consumers over.