It may be five months late, but have you read the April 2017 issue of HWM Malaysia? We’re asking because back then, we did a review of the HyperX Alloy FPS mechanical keyboard, which has made a positive impression on us. Now, we’re taking a look at its more sophisticated sibling, the HyperX Alloy Elite. 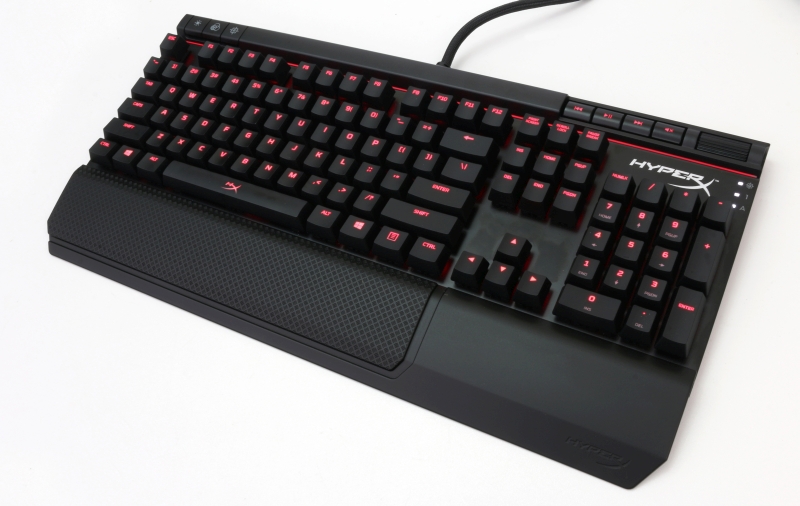 It goes without saying that there’s going to be a lot of comparisons between the two, especially as they’re from the same line and made for people with different needs. And we start off with the immediately obvious. These include the extras found at the top of the Alloy Elite. 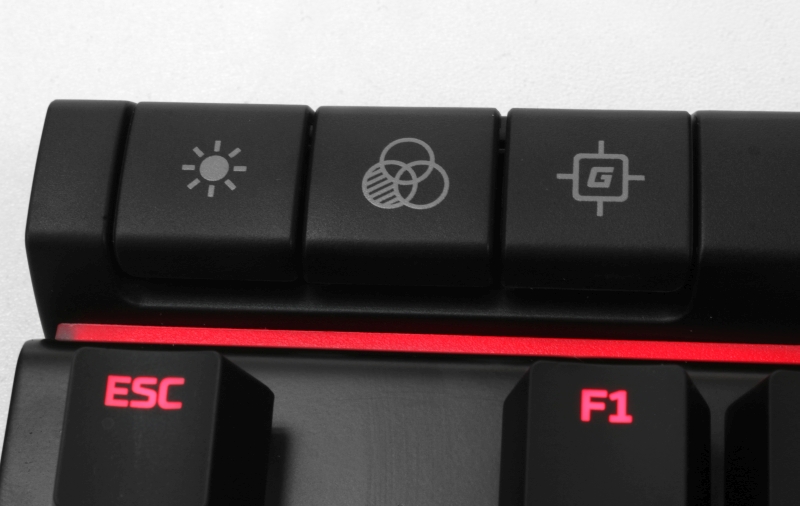 On the top-left corner, you have three buttons. The first controls the brightness of the red backlight, of which you have four settings: off, low, medium, and high. The second controls the kind of backlighting you want, from the basic always on, to the ripple effect. There are a total of six modes, all of which are accessible straight from the keyboard. As with the Alloy FPS, there’s no need for any additional software to access the backlighting, but it also means that you don’t get macros. The third is the ‘gaming mode’ button, which simply disables the Windows key. 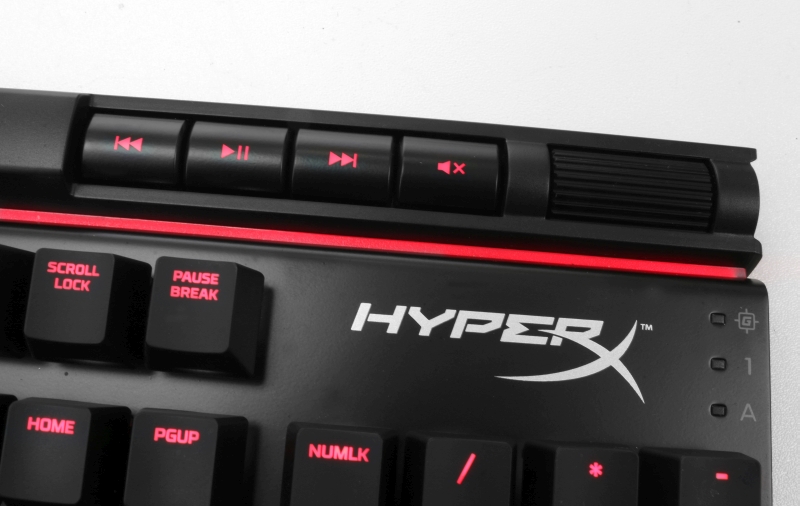 Moving to the opposite side, the top-right corner is where you’ll find a set of media buttons and a wheel. They let you skip back a track, play or pause the current track, skip to the next track, or mute your system. The wheel on the far right acts as the volume control. Between these shortcut keys and the rest of the keyboard is a long strip of light that basically helps you identify which lighting mode is currently engaged.

Other differences include the non-detachable USB cable that splits into two at the end. Generally, you’ll only need one plugged in, but plugging in two lets you use the USB passthrough that’s to the right of the cable. Yes, this one does more than just charging. Also, the Alloy Elite does come with a wrist rest. It’s nothing fancy like magnetically attached or memory foam padded in faux leather, but the bit right below the QWERTY part of the keyboard is textured, which does add to the comfort factor slightly if you’ve got sweaty palms. The rest of it is given a matte finish, but while this is not exactly sweat-inducing, getting sweat stains off of it may be a hassle that you’d really want to avoid. 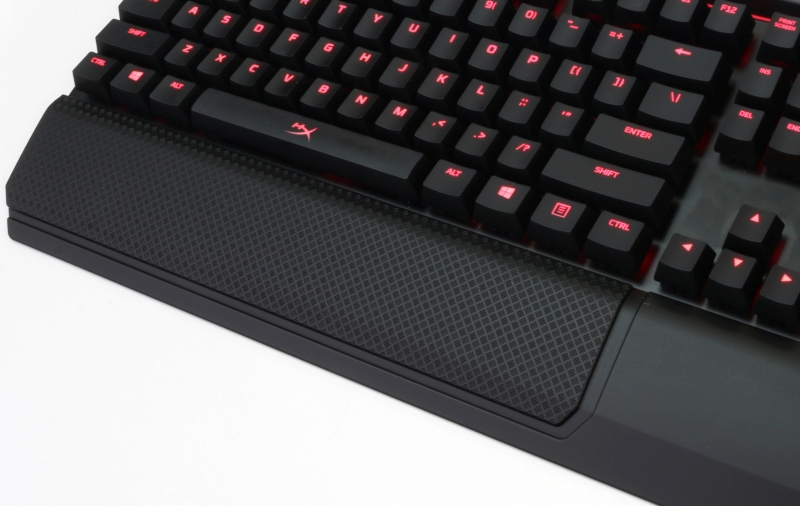 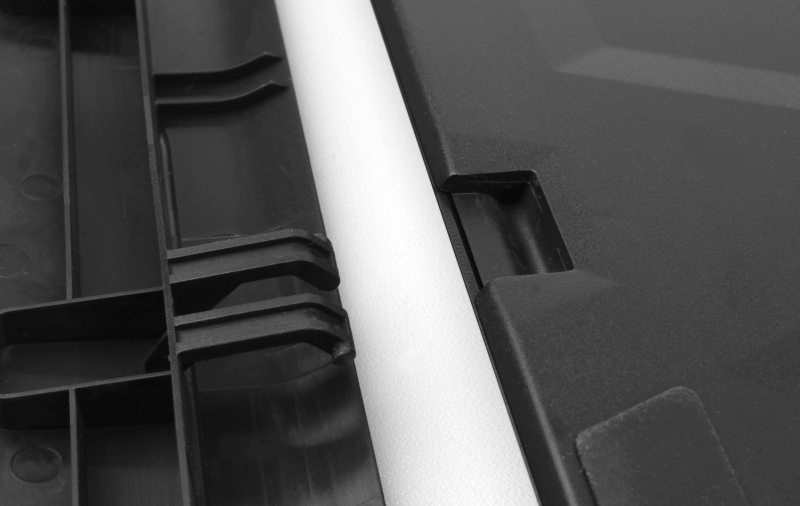 These fundamental differences aside, the Alloy Elite is pretty much the same as the Alloy FPS. You even get the same choices of Cherry MX keys to choose from. Our review unit this time around came with Cherry MX Red. And as you'd expect from a gaming keyboard, you get full anti-ghosting and N-key rollover so that all your key presses are registered.

Our overall experience with the Alloy Elite is mostly similar to the Alloy FPS too. We gamed pretty comfortably with it, on titles like Overwatch, Warhammer 40,000: Dawn of War – Soulstorm, Dota 2 and The Witcher 3: Wild Hunt. Typing was great too, and the wrist rest did help us keep going with both typing and gaming.

The HyperX Alloy Elite is essentially the Alloy FPS that’s designed to sit on a desk and stay there for the foreseeable future, rather than being carried around every so often. They’re very similar, but the small differences between them make all the difference in defining their purpose.

For one, a thick and non-detachable cable would mean that it’s not meant to be carried around. Doing so would risk damaging the cable where it’s attached to the keyboard. This argument begins to hold more weight when you consider the fact that the USB cable splits into two at the end. This is an unnecessary hassle if you need to constantly plug and unplug them when you’re setting or packing your gear up, and a USB port is a valuable resource if you’re gaming on a notebook.

Also, if your intention is to carry the keyboard around so that you can game on the go, then having media shortcut keys would be the least of your concern, even if it’s occasionally helpful. On the other hand, its contribution is exponentially appreciable if it’s on a workstation, especially if you’re someone who works with music. With that in mind, the HyperX Alloy Elite is definitely better suited homebound, attached to a system at home that’s both a gaming rig and a workstation. In such situations, you’ll not only make its slight flaws a non-issue, but also make full use of everything that it has to offer at your disposal.

All that said, would we recommend it to you? With an official price of RM519, this is one keyboard that definitely gets our stamp of recommendation, considering all the extras that come with it. The only other thing left that you'll have to decide on is whether you want it with Cherry MX Red, Blue, or Brown keys.