It’s not difficult to picture the smartwatch being in a precarious position, especially now with dedicated fitness tracking smartbands making a splash. The Apple Watches notwithstanding, it takes a smartwatch that does more than being a second screen that lets you check your texts and emails without taking your phone out of the pocket for it to be considered for purchase.

And now that there are smartwatches that do all that, it becomes a competition of which manufacturer can cram the most fitness tracking features into them, sadly omitting battery life. And with that, we come to Huawei’s second entry into the smartwatch market, the Huawei Watch 2. To those who have paid close attention to the smartwatch space, then you’ll likely notice that the Huawei Watch 2 is larger than the first iteration, but has a smaller display. This is a bit of a bummer because it means a smaller screen to make use of all Android Wear 2.0 has to offer. But on the flip side, it’s also lighter, because some of the metal bits have been replaced with plastic. That said, unless you went and scratched or knocked on it on purpose, you wouldn’t be able to tell the difference immediately.

It also received a sportier look too, which may be its way of telling potential buyers that it functions both as a fitness tracker and smartwatch at the same time. The ceramic bezels highlight this best in our opinion, with the crude gear design and the numbers around it. Sadly, it’s stuck in place, meaning you don’t get an extra input method through it. What you do get for input methods are the touchscreen and two buttons on the right. The top one activates the launcher, showing you the apps with a press, or launching Google Assistant by keeping it pressed down. The bottom button runs the Workout app by default, but this can be changed to perform other action if you prefer to do so.

The straps that came with the Huawei Watch 2 looks pretty bland, but wouldn’t cause any discomfort while you have it on. If you don’t like it, you can also swap it out with any 22mm watch straps of your choosing. That said, you’ll have to go with something sporty due to the Watch 2 itself looking inherently sporty. 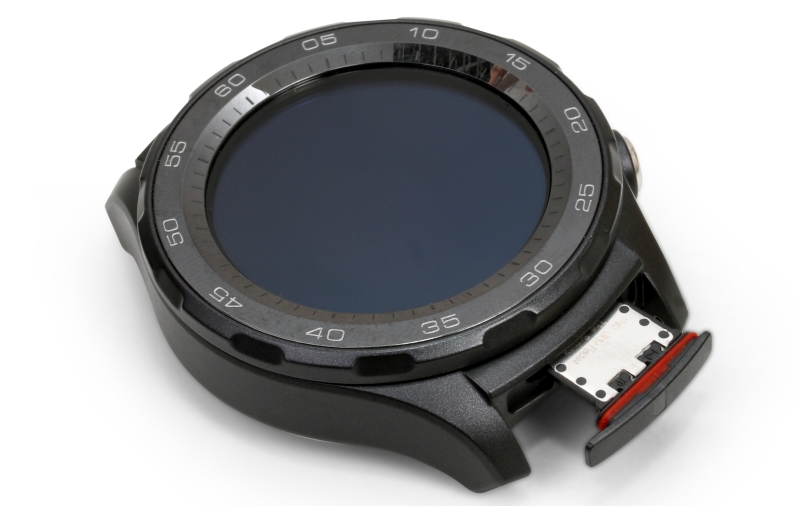 Speaking of swapping straps, the Huawei Watch 2 comes with a Nano-SIM slot for 4G connectivity, which is accessible when you remove the strap at the bottom of the Watch 2. This, combined with GPS, NFC, 4GB of storage space and Android Wear 2.0, lets it operate pretty independently of a phone.

Write a Review
Compare This | Specifications
Has all the sensors to be used as a fitness tracker
Respectable battery life
Phone independence
Relatively light
Android Wear 2.0 is easy to navigate
Smaller display than before
Fixed bezel a missed opportunity for Android Wear 2.0
Better waterproofing would've made it a true running watch