What's changed from the previous model? 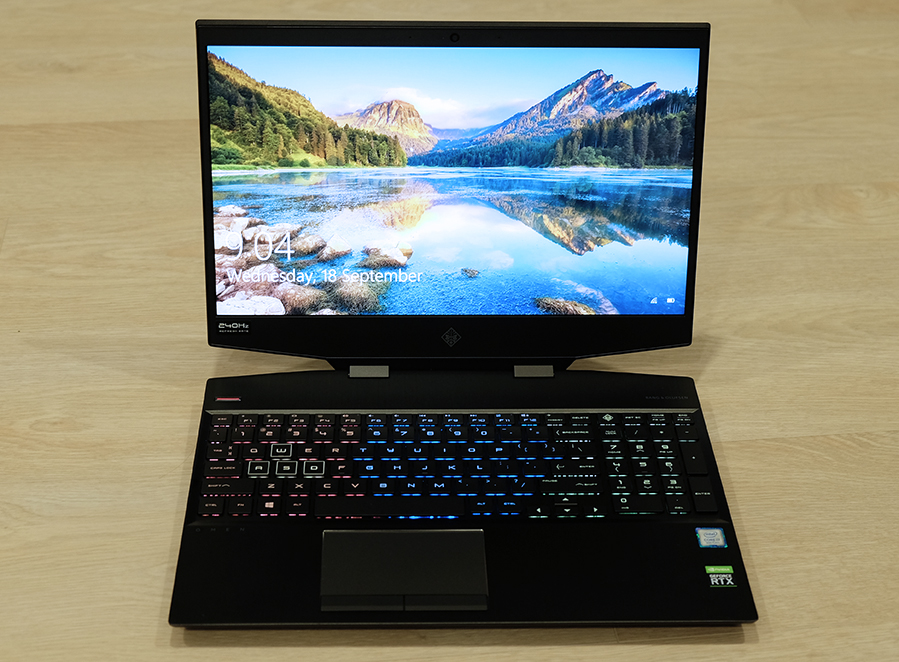 The new Omen 15 hasn't really undergone that drastic of a design overhaul, and it still looks very similar to last year's model. That said, HP has ditched the carbon fibre pattern and red accents on the lid in favour of a more subtle, monochrome look. The lid also has a brushed metal finish, which looks more classy than before. 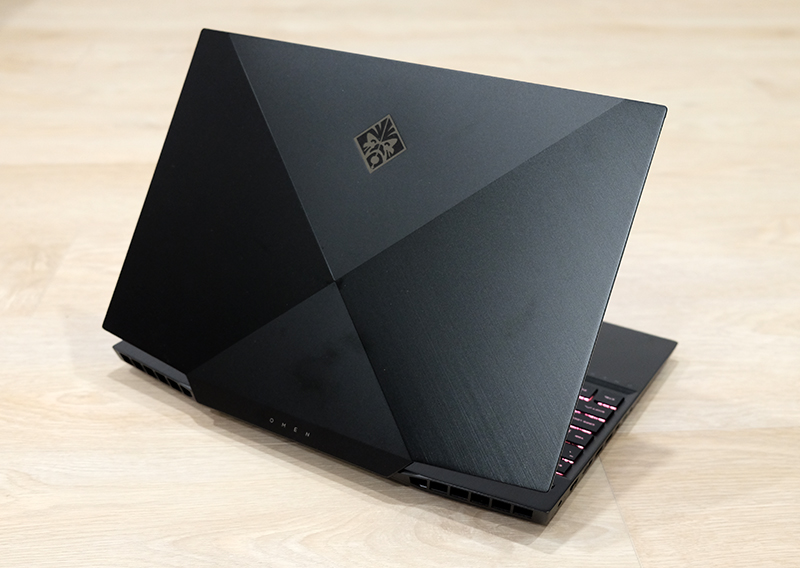 The design of the hinge is different as well. The lid is now attached to the base in the middle and flares upward, whereas its predecessor opted for two small hinges that made the display look as if it was floating. I actually prefer the old design a bit more, and the new look feels a little too aggressive. The display also isn't able to recline that far, so this isn't one of those laptops that will let you lay the display completely flat if you need the flexibility. 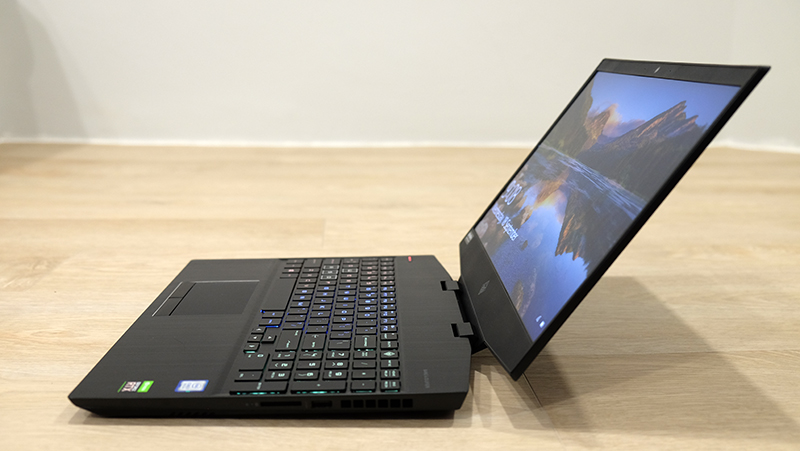 That said, this is a gaming laptop, and it sure looks the part. I can definitely see it appealing to folks who want more eye-catching designs.

Build quality also feels really solid for the most part. The aluminium and plastic chassis exhibits little to no discernible flex, and the hinge is smooth and easily operated with just one hand.

This year's Omen 15 is also quite a bit thinner than its predecessor, measuring 20mm thick to the latter's 26mm. That's a pretty big difference, and the new Omen is a far more svelte machine. The weight doesn't appear to have changed though, and the laptop still weighs in at 2.4kg, which is fairly hefty.

But bigger changes are afoot under the hood. The cooling system has been beefed-up, and it's got an imposing new name to go with it as well. Dubbed Omen Tempest, the vents and fans have been tweaked for better airflow. HP is also using Thermal Grizzly's Conductonaut on the CPU, a liquid metal compound that is supposed to significantly improve heat dissipation. 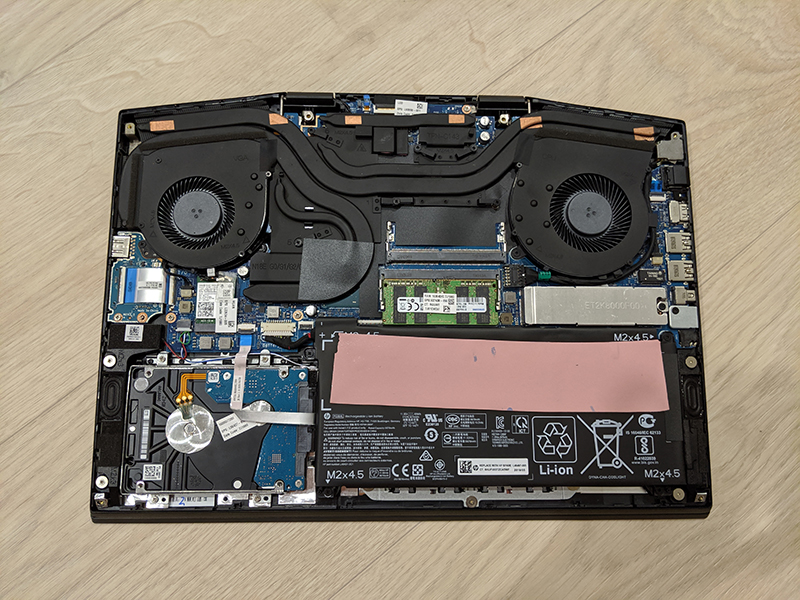 In addition, the Omen Command Center now offers a Performance Control tab that lets you ramp up the fan speeds to maximise cooling. However, there only seems to be a toggle between Auto mode and Max speed, and it'd have been nice to have the option to create a custom fan curve. Fortunately though, the Omen 15 is one of the quieter gaming laptops around, even when the fans are set to full throttle.

I can count four heat pipes between the CPU and GPU, and there's even what looks to be a heatsink of sorts for the M.2 drive and thermal pads for the battery.

The display is vivid and bright, and I have no issues with it at all. There's no obvious bias toward the cooler or warmer end of the colour spectrum when viewed with the naked eye, and it'll do just fine for games and movies. It also has a super smooth 240Hz refresh rate and support for NVIDIA G-Sync, so you can expect a fluid and tear-free gaming experience. That said, it's still debatable whether there's any use having such a high refresh rate screen on a laptop, since the mobile versions of the RTX GPUs will still struggle to output anything close to 240fps in AAA games, even at 1080p. 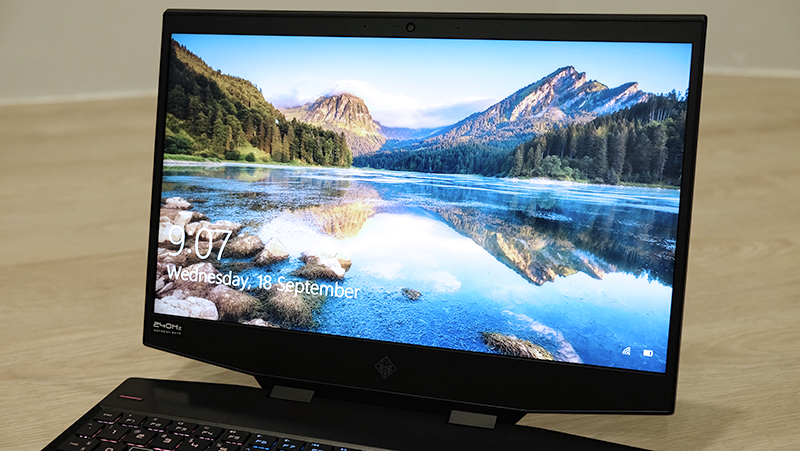 And while the left and right bezels are quite slim, the top and bottom bezels are still relatively thick, although they're far from the most egregious example I've seen. The webcam also sits in the top bezel, so there will be no fiddling with awkward camera angles here.

The keyboard supports just four-zone RGB backlighting. That said, I think a laptop at this price should really offer per-key customisations. The keyboard also lacks any controls to adjust the backlight brightness, and you have to contend with just and on and off toggle. HP has done a fairly good job of keeping illumination even on the keys with secondary legends, but it does feel like the LEDs could use an overall brightness boost. They're still visible under bright overhead lighting, but they look rather lacklustre. 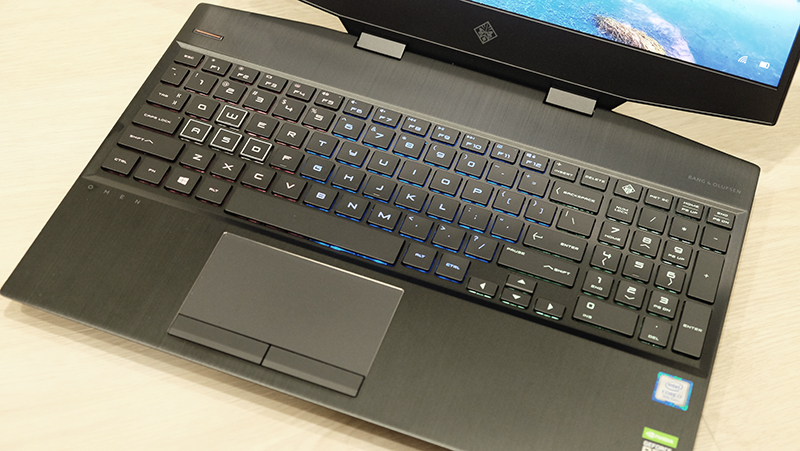 You control the lighting in the Omen Command Center, but there's no way to adjust the brightness here either. In a confusing turn, there's actually a slider for brightness, but instead of boosting the brightness, it seems to control the white levels, and sliding it all the way to the right simply turns the LEDs white. 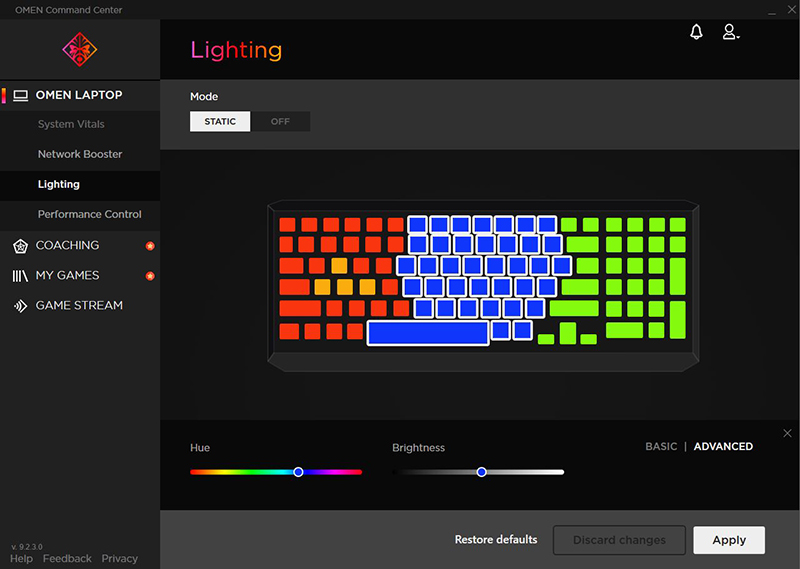 Nevertheless, the typing experience is pleasant, and the keys feel bouncy and offer up decent travel.

The Precision trackpad has separate left- and right-click buttons. I still think integrated buttons make for a cleaner and more modern look, but at the very least the buttons on the Omen 15 provide decent feedback and feel good to use - better than their previous attempt.

I've saved the best for the last though. The speakers are one of the best I've heard on a gaming notebook, a continued bright spot for the Omen series. They pump out loud and lush tunes, for a gaming laptop that is, and I'm continually surprised by how good and clear vocals sound on the laptop. The one weakness is the bass, which seems to lack weight and could be a little tighter.

The Omen 15 is equipped with a rich selection of connectors, including one Thunderbolt 3, three USB 3.1 (Gen 1) Type-A, one Gigabit Ethernet port, and a headphone and microphone combo jack. For display outputs, it has one Mini DisplayPort and one HDMI connector. There's also a multi-format SD card reader here, a nice inclusion that many gaming laptops in this class still leave out. 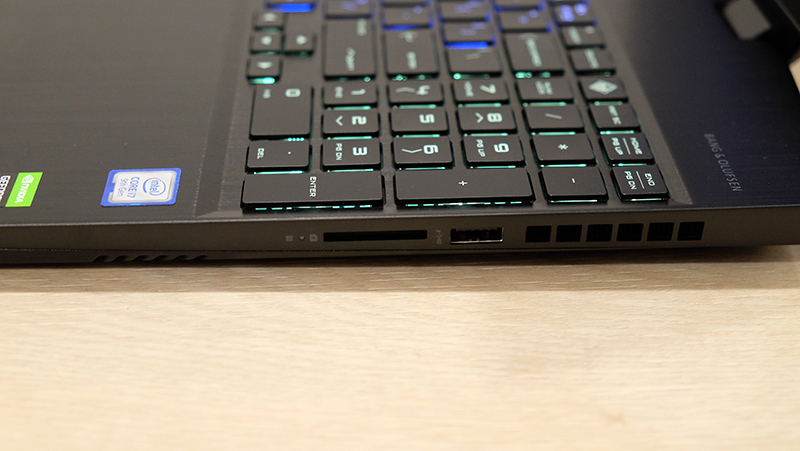 Unlike the 2018 model which shoved some of the connectors to the rear, this year's Omen 15 sticks all the ports on the sides, which means they're all easier to access. But how you feel about this really depends on how you intend to use the laptop. Rear ports are good for outputting to an external monitor because they allow for easier cable management, but ports at the side work better if you're just going to be using the laptop right in front of you most of the time. 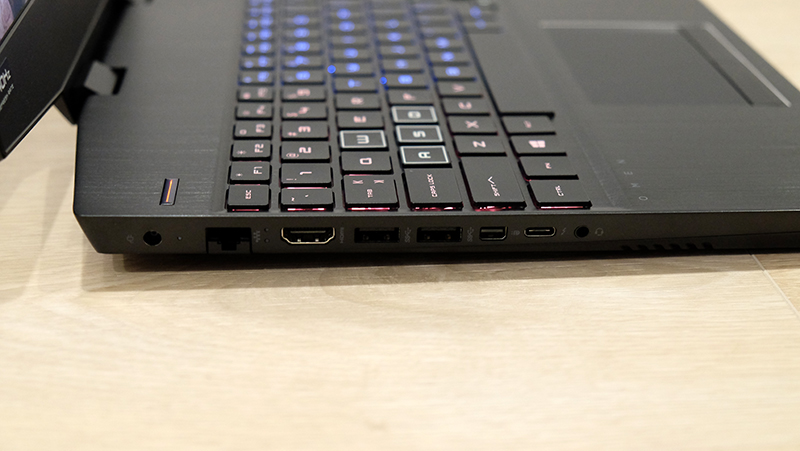 Unfortunately, it ships with single-channel memory 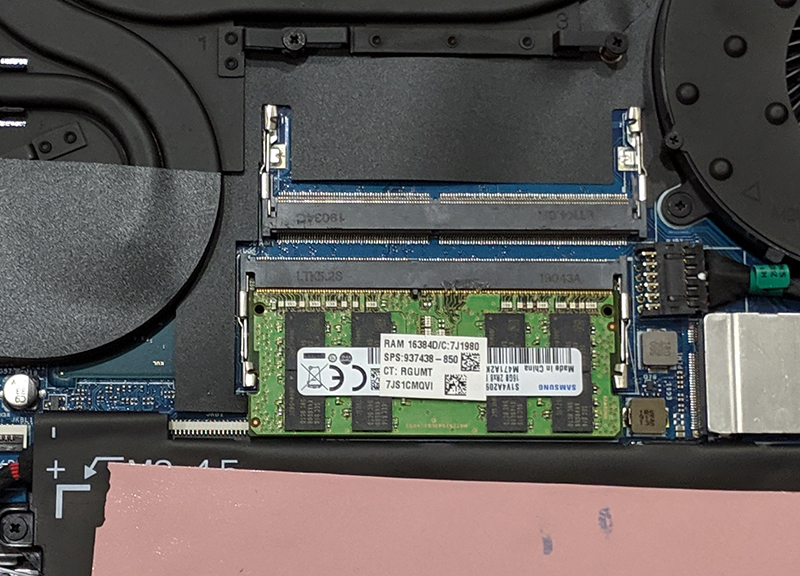 One big downside of the laptop is that it only comes with a single 16GB stick of RAM. As with the ASUS ROG Strix Scar III and ROG Zephyrus S, single-channel memory is a bad idea, particularly on a high-end gaming laptop like this one.

The problem is a result of how certain games or applications manage system memory. It affects all MS Hybrid systems – this is Microsoft's implementation of NVIDIA's Optimus technology – running Intel processors, GeForce RTX graphics, and just one RAM module. So while the root of the issue doesn't lie with laptop makers, the onus is still on them to outfit their systems with the best performing configuration, especially when they're asking for this much money.

The RAM slots are easily accessible if you want to add an extra stick, and I strongly recommend that you do that, but it doesn't seem fair to expect people to have to pay more for an additional memory module. If I'm paying for a GeForce RTX 2080 Max-Q, I fully expect it to perform as such straight out of the box and not come encumbered by a 20 to 30 per cent performance deficit.