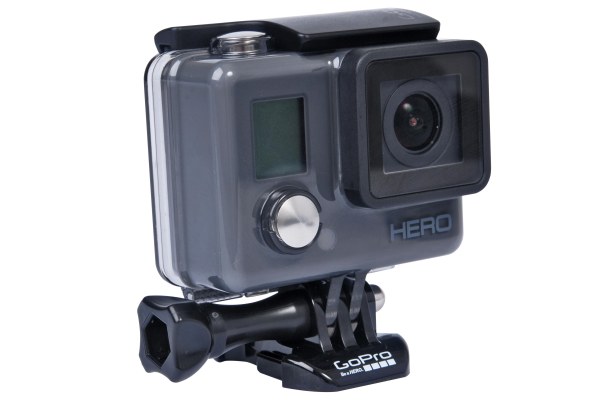 The name GoPro has become synonymous with action cameras in pretty much the same way PenDrive was once – and to some extent, still is – synonymous with USB flash drives, and SanDisk with SD cards. On the flip side, the one thing that has been synonymous with GoPro action cameras was the massive price tag that contrasted the size of the cameras. However, that is not always the case, as GoPro does have entry-level action cameras aside from the top-tier stuff. Today, we take a look at one such product: the GoPro HERO.

To be honest, no one who confuses the Hero for other higher-end GoPro cameras deserve any blame. They are, after all, called the same thing, with a number, color and occasionally the presence of a plus sign to tell you where each product lies in the tier of things.

Back to the GoPro HERO. It has no number, color and plus sign suffixes in the name, hence its entry-level position. That said, it is still capable of 1080p video recording at 30FPS and 720p at 60FPS, as well as 5-megapixel still photos at five shots-per-second bursts. It also has a number of user-friendly modes and features, such as QuikCapture, SuperView and Auto Low Light, but we’ll go into those later.

Weighing 111g, the GoPro HERO is light. That 111g includes the housing, which the GoPro HERO is built into. This means you cannot get the unit out of the housing unlike other GoPro cameras, so if you happen to scratch the bit in front of the lens, you will have to either deal with it or get a new GoPro HERO unit. 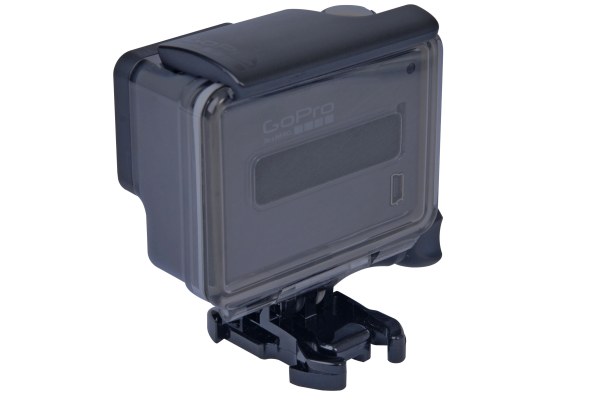 You can still remove the backdoor for it, however. It comes equipped with the standard flat backdoor, which makes the GoPro HERO waterproof to 40m, as well as being dust-proof. You also get a skeleton backdoor, which has two vents on it. With this on, you get better audio recording quality, at the cost of its dust and waterproofing. 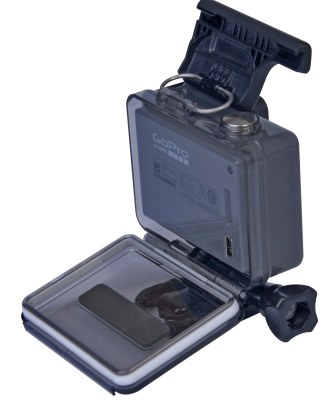 The skeleton backdoor also means you can access the Mini-USB port for easy charging and file transfer. No, you did not read wrong; the GoPro HERO uses Mini-USB instead of Micro-USB. This does make it a bit of a pain if you happen to misplace the one that comes with the camera, but at the very least you don’t have to go looking for one if you don’t already have one beforehand.

Some other things you get are a flat and a curved adhesive mount. There is also a rubber locking plug to make sure the unit doesn't detach from the mount before you detach the plug from the buckle. 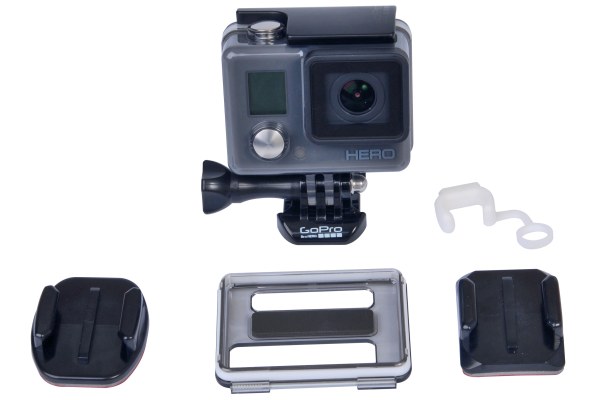 What you don’t get is a Class-10 or UHS-1 microSD card. If you happen to have one lying around, you also need to make sure it is no larger than 32GB in capacity, which is a tad odd, considering what the GoPro HERO is made for. There's also no wireless connectivity of any sort, nor do you get the GoPro accessory port, meaning you won’t be able to preview your shots before actually shooting. 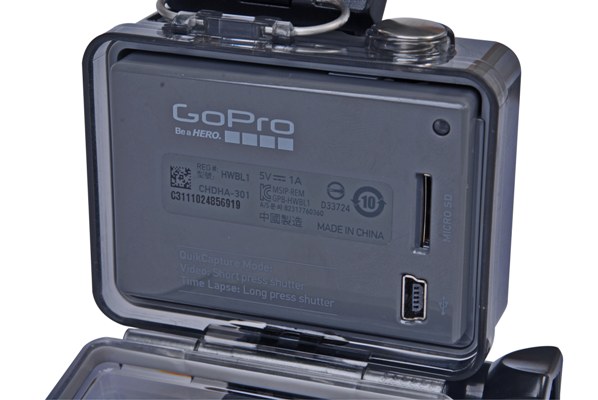 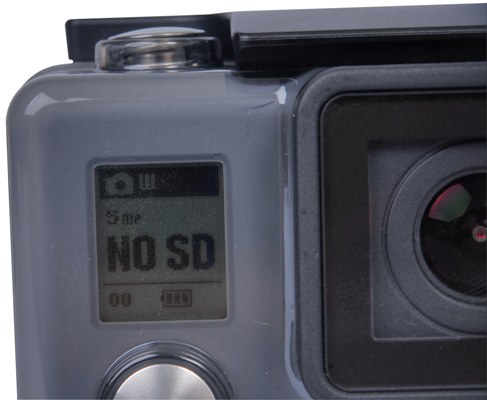 Earlier on, we mentioned features like QuikCapture, SuperView and Auto Low Light. The first lets you press or hold the capture button, while the GoPro HERO is turned off. Pressing will turn it on and immediately start recording videos until the next button press – which turns it back off, while holding it down for two seconds will get your HERO to start capturing time-lapse photos until the next button press. This is a handy feature, especially the one for recording, though you must be mindful of how you store the GoPro HERO, lest the button gets accidentally pressed while in storage, wasting space and battery life.

Speaking of which, GoPro states that the HERO can last for two and a half hours of continuous recording. While that may be a lot, you’d have to be careful you don’t accidentally drain them the way that is mentioned above. The battery itself is not removable, and is rated at 1,180mAh.

SuperView, on the other hand, simply stretches your 720p videos a little, giving it a 4:3 aspect ratio. While we’re at it, it’s also worth mentioning that while you can switch your video recordings between 1080p at 30FPS, 720p at 60FPS or 720p at 60FPS with SuperView on, your still photos are locked at 5-megapixels.

As for Auto Low Light, it is as it says; the GoPro HERO drops its shutter speed automatically in dim lighting so that your videos aren’t too dark. This, unfortunately, only works with 720p recording, but it works with SuperView on or off.

Now to the actual performance. As a bare-basic GoPro, you shouldn’t be expecting spectacular results. That said, it does do quite well, considering it’s an entry-level device. For still images, at 5-megapixels, you can probably do better with your mobile phone, depending on what phone you are using. Images are not blur, but they do look a little fuzzy. 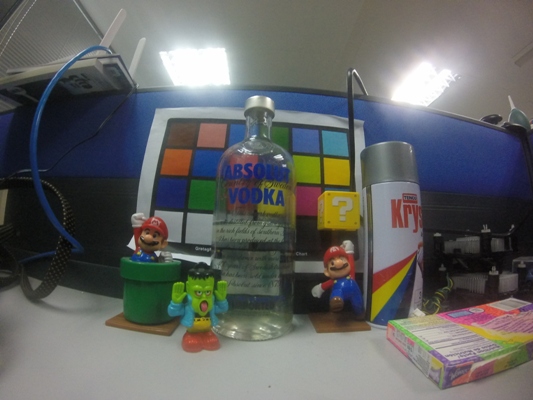 As for videos, what we can say for certain is that while 1080p does look better than 720p, it is barely noticeable, unless you view your videos on a particularly large screen. The latter is also considerably smoother, so there’s another reason to stick to 720p. As for SuperView, it is entirely up to you if you want to use it, since you do get more vertical space recorded without sacrificing video quality.

The GoPro HERO is clearly not as heroic as its more expensive brothers. Its shooting options are bare basic, you can’t remove it from the housing and, perhaps worst of all, it doesn’t have any forms of wireless connectivity nor does it have the usual GoPro accessories port. This means unless you really know what you’re doing, you will be shooting blind with nothing to preview your shots with, and this might mean having your entire adventure captured at a wrong angle, only to find out when you get back home.

While that is a major weakness for many users. those of you who have had lots of prior experience with action cameras may not face this issue, and may instead even benefit from the HERO's lower price. While there is still no local pricing at the time of writing, the GoPro HERO is priced at US$129, which translate to about RM452. At that price point, you can almost get four HEROs for the price of a top-of-the-line HERO4 Black, which costs RM1,849. If you have sufficient experience using GoPro cameras, having more for the price of one will give you more angles to shoot from. Also, while the resolution you get is nothing like the HERO4 Black, it shouldn’t be a problem unless you intend to make professional videos for the big screen.

Write a Review
Compare This | Specifications
Affordable, especially compared to other GoPro cameras
Comes bundled with mounts and a skeleton backdoor
Cannot be removed from its housing
No accessory ports or wireless connectivity means no previewing of shots