Gigabyte X299 AORUS Gaming 9: The one with 'Extreme' tendencies 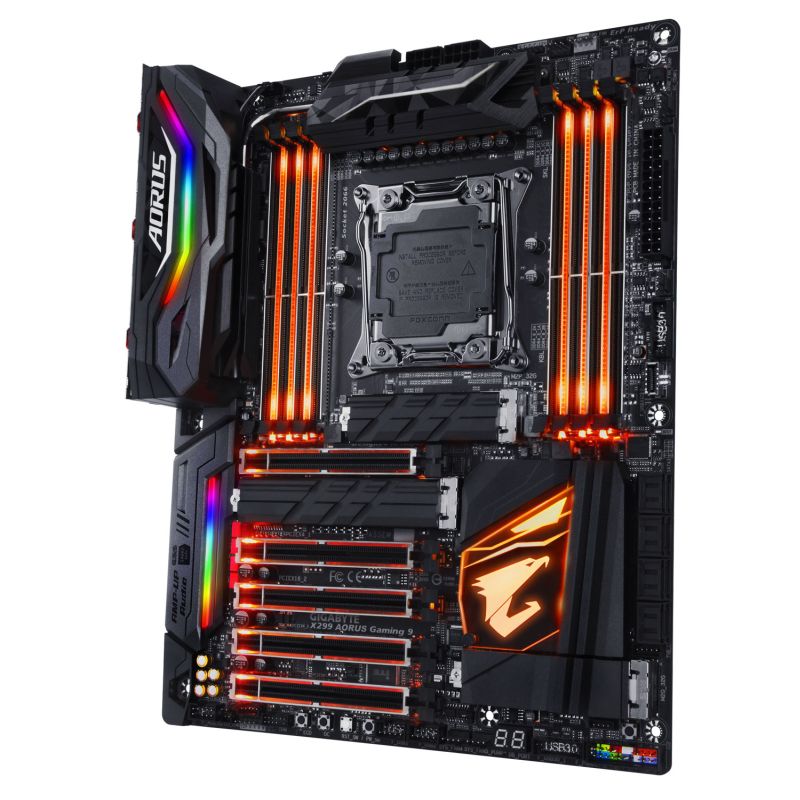 As Intel makes a push for its new Core X CPUs to the mainstream market, AiB partners of the semiconductor maker have had a fairly long time to prep for the arrival of the new CPUs, and more specifically, the Skylake-X lineup of HEDT (high-end desktop) processors.

In the case of Gigabyte, the Taiwan-based manufacturer had several of its X299 motherboards minted about the same time as the competition, which were unveiled during COMPUTEX this year.

For this review, we’ll be taking a look at the X299 AORUS Gaming 9, a HEDT motherboard fitted with a whole lot of features designed to squeeze out and drive as much performance from a Skylake-X processor as it can.

If anything can be said about Gigabyte’s offerings, it’s that the company is famed for the durability of its hardware. It is both a reprieve and mercy that this long-standing tradition has carried forward into this third installment of the AORUS branding (lest we forget, the Intel-based Z270 and AMD-based X370 motherboards are all part of the same family).

In the case of this X299 specimen, the motherboard actually look a lot flashier than its non-Extreme counterpart. Specifically, Gigabyte seems to have spared no effort with the RGB lighting on the X299 AORUS Gaming 9. From the VRM heatsink (the one with the big AORUS insignia on it) and the rear I/O panel, down to the motherboard’s reinforced PCIe slots, it’s safe to say that this motherboard can double as a night light in your room if you have the tendency to leave your PC on at night. 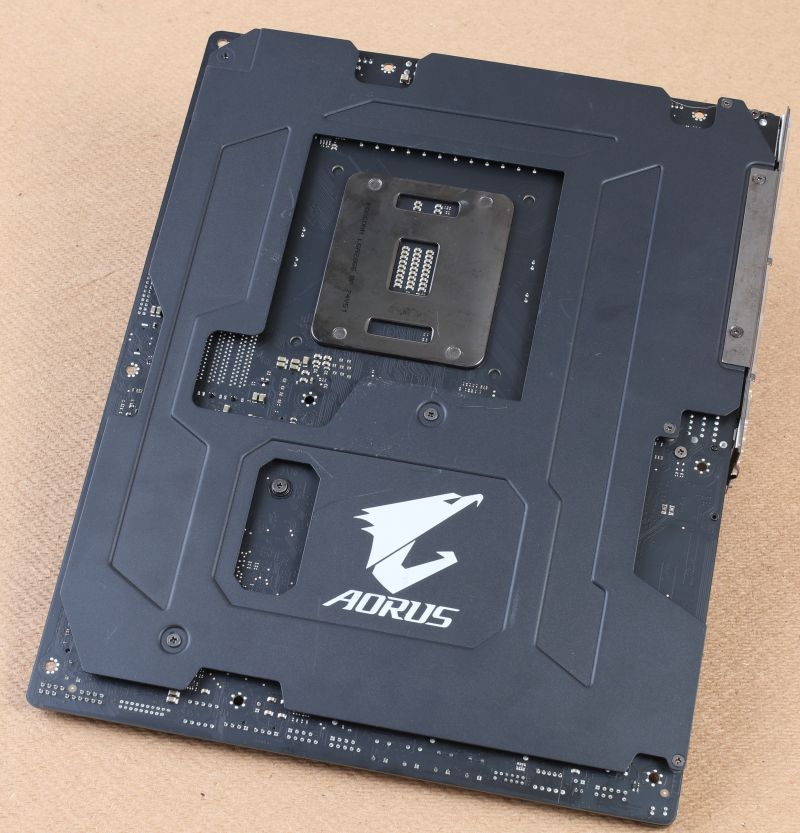 Surprisingly, Gigabyte seems to have taken to the idea of reinforcing the X299 AORUS Gaming 9 with a pretty thick and solid backplate: something that we’ve only seen done by one or two of its competitors. Of course, its practical use of adding rigidity and acting as a indirect heatsink to the motherboard notwithstanding, it does add to its overall aesthetics (not that you’ll ever see it once it’s actually bolted down into a PC).

As it is with all Intel-based motherboards that were announced this year, the X299 AORUS Gaming 9 comes with a plethora of features, some of which are familiar, and some new. 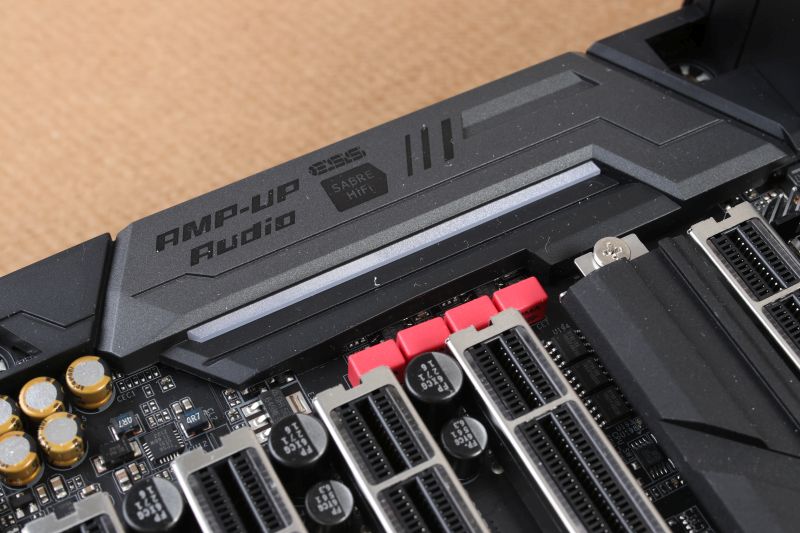 Some of the familiar features that fans will recognize on this motherboard include Gigabyte’s ESS Sabre Hi-Fi DAC. Couple that with the onboard Realtek ALC1220 processor, and what you have here is a built-in audio system that is fit for gamers and audiophiles alike.

Like its Extreme predecessors, the X299 AORUS Gaming 9 has a total of eight DDR4 memory slots that allow the motherboard to support a maximum of 128GB of memory, with frequencies of up to 4,400MHz when overclocked. 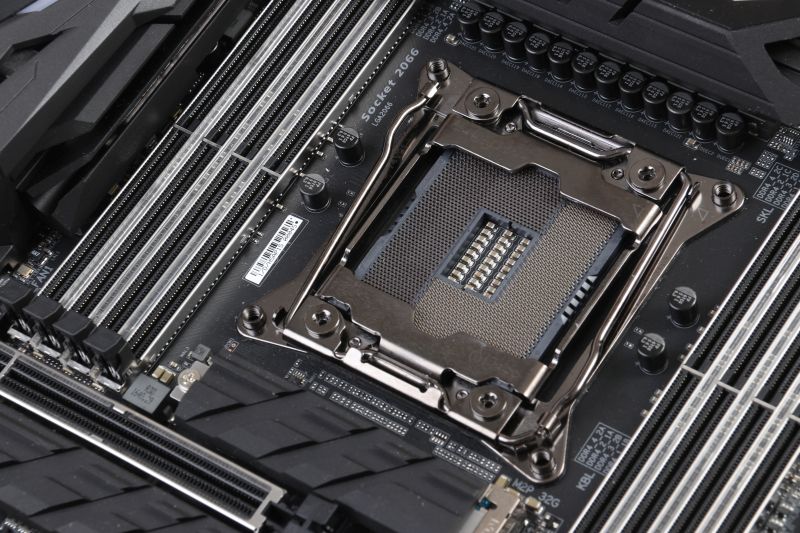 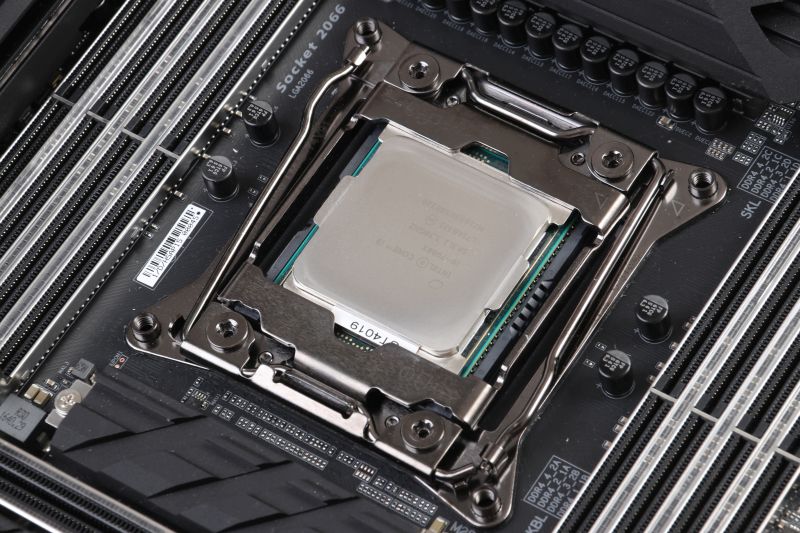 Moving forward, the motherboard has a total of five PCIe 16x slots that can take advantage of a maximum of 44 PCIe lanes, but that is if the CPU in question is a Core i9 CPU or higher. That being said, it should be pointed that the only currently available Core i9 CPU at the moment is the 10-core, 20-thread i9-7900X. 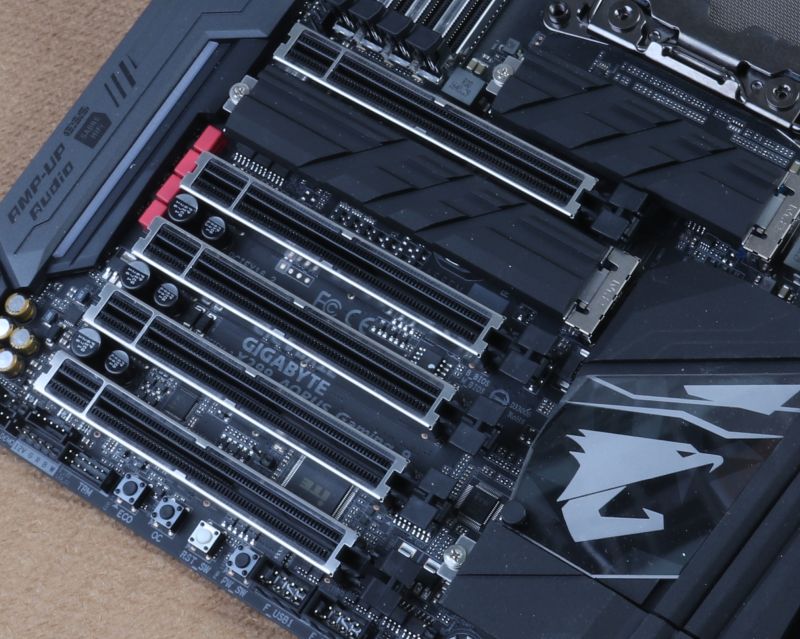 On that note, these motherboard will be able to support up to a 2-way SLI multi-GPU setup for NVIDIA's GeForce graphics cards, as well as a 3-way CrossFireX multi-GPU support for AMD’s Radeon series graphics cards. 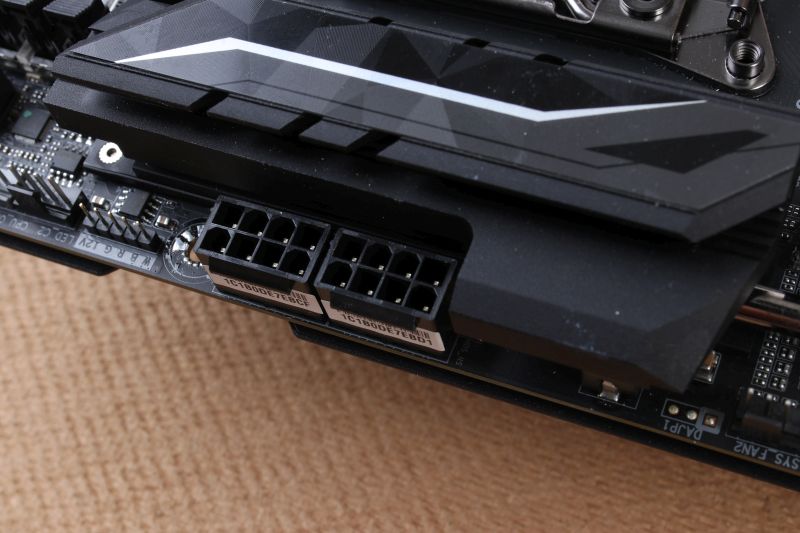 True to its overclocking nature, the X299 AORUS Gaming 9 is fitted with two 8-pin ATX 12V power connectors at the top of the motherboard, giving overclockers the extra added option of feeding a damn sight more power through the motherboard, thus allowing for more stable overclocking frequencies for the CPU. 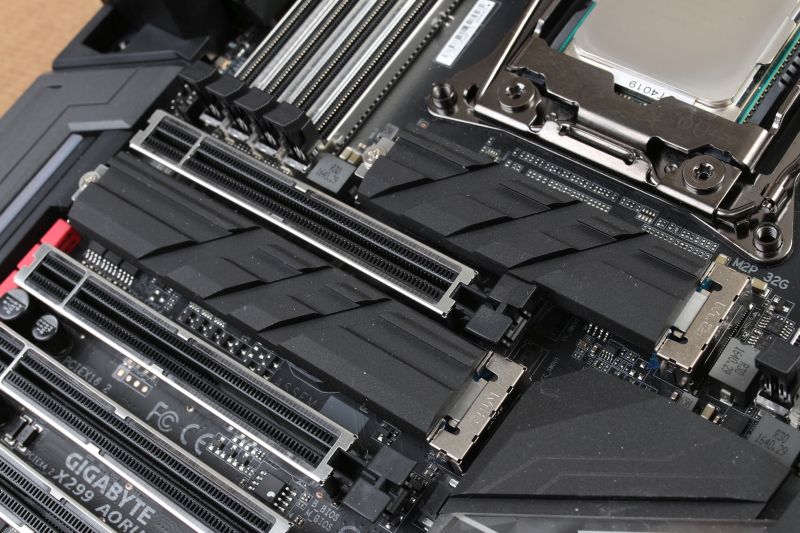 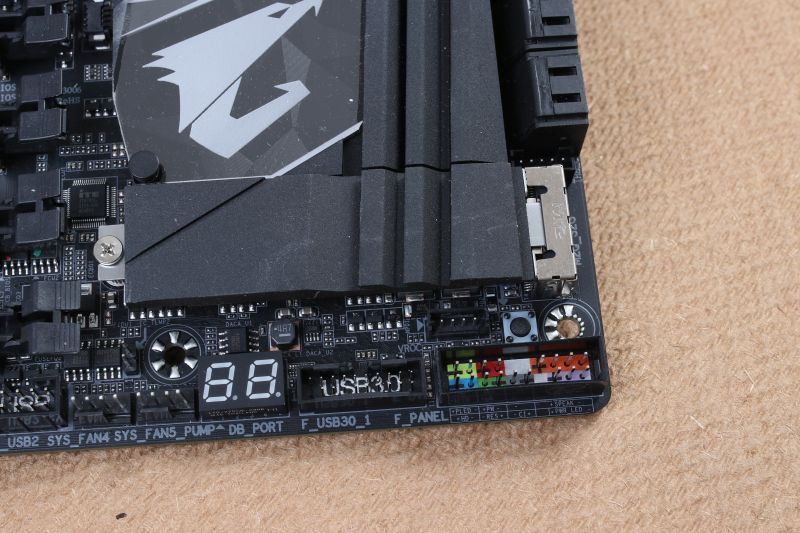 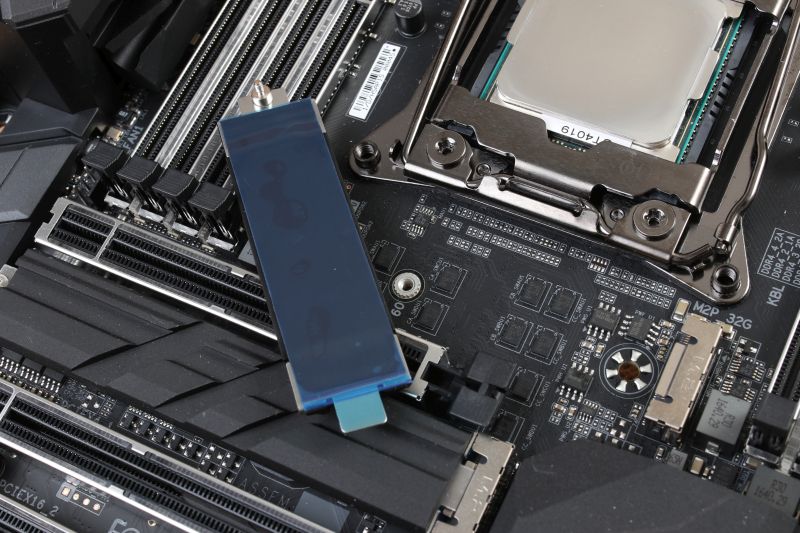 But if one were to ask what exactly makes this motherboard stand out above the rest, it would be the motherboard’s three (count them, three) M.2 PCIe SSD slots, all of which are also Intel Optane Memory ready. However, if you have no intention of taking advantage of Intel’s new blazing-fast memory module (which we’ve already proven in an earlier review), these three M.2 SSD slots with their AORUS-designed thermal guards can be used to run on a RAID 0, 1, 5, or 10 storage configuration. If you want to take full advantage of these PCIe NVMe slots, however, you’re going to need to get an Intel VROC key in order to do so. 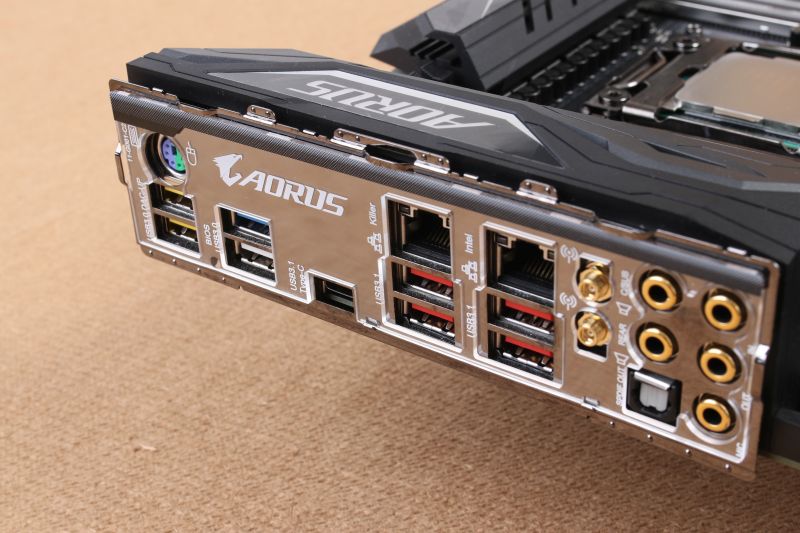 Besides the two LAN ports, we expected significantly more ports to be installed into a motherboard of this caliber. That being said, it's nice to see that the board does come bundled with built-in Wi-Fi and Bluetooth 4.1 module.